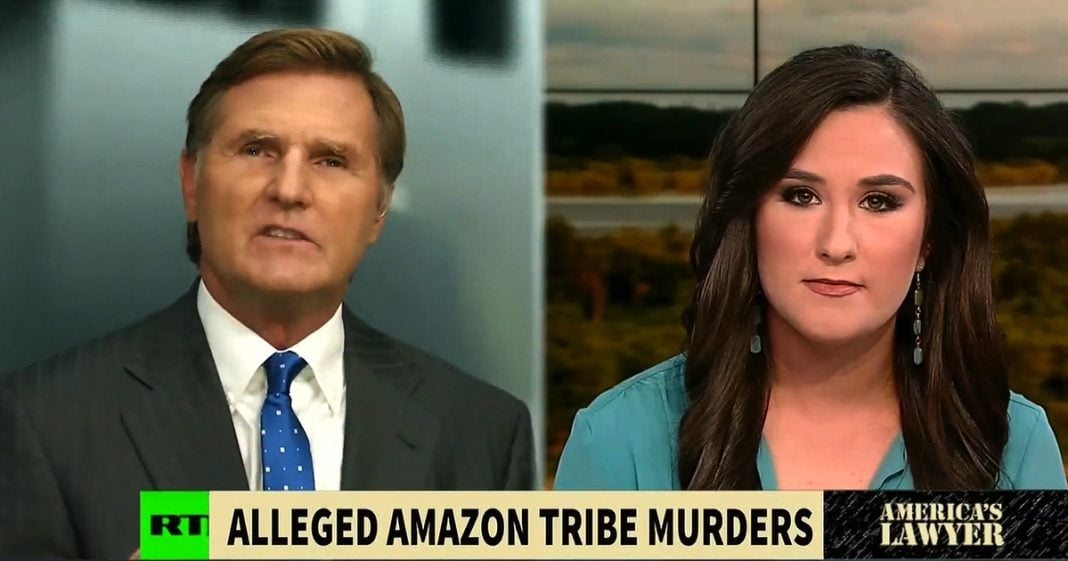 Via America’s Lawyer: Mike Papantonio and Simone Del Rosario talk about the Amazon tribe massacre that allegedly took place during the summer.

Mike Papantonio: Members of a remote tribe from the Amazon were murdered, according to the Brazilian agency on indigenous affairs. In an audio recording obtained by the agency, gold miners bragged about the massacre at a bar near Colombian borders, saying it was a kill or be killed situation. Joining me now to talk about this is RT correspondent Simone Del Rosario. Let me ask you this. First of all, what’s the full story in this case, and how has it developed so far, Simone? Where do you see this?

Simone Del Rosa: Well, Mike, Brazilian authorities are investigating reports, like you said, of a massacre up to 10 people that are from an isolated tribe in the Amazon, and this massacre was allegedly carried out by illegal gold miners in the area. This happened in the Javari Valley, which is the second largest indigenous reserve in Brazil, and it allegedly took place in August. Now, authorities only learned about it after these miners were caught bragging about it a bar. They spoke about cutting up these people’s bodies, throwing them in the river. The men also had a handmade paddle and a small bag that these tribesmen used for carrying food, and these gold miners claimed they took it from their victims.

According to a government coordinator, there’s a lot of evidence here, but this case still needs to be proven. A prosecutor did confirm the investigation is going on, but we’re talking about a territory that is vast. The access to it is extremely limited. Now, because these tribes are uncontacted, you can’t just swoop in and investigate, bring all of your law enforcement and authorities into this situation. It’s a very precarious situation. It’s going to require heavy involvement from Brazil’s agency on indigenous affairs, FUNAI, and as they work together with law enforcement to figure out if they can come up with these bodies to prove this alleged massacre.

Mike Papantonio: Simone, is this a first of its kind, or is this becoming a pattern that we’re seeing down there?

Simone Del Rosario: Well, according to the prosecutor in the region, this is the second case that he’s seen this year, and before that, he had never seen a case in this region before. The first case that he saw happened in February of killing of uncontact indigenous people, but just because he hasn’t investigated cases before doesn’t mean it hasn’t happened elsewhere in the country and in South America. Earlier this summer, the UN warned that indigenous people in Brazil are specifically at risk. They noted the country has seen the highest offenders of any country in the world over the past 15 years. They were averaging one murder a week, and then you have your recent figures. They’re even more startling. According to Land Pastoral Commission, because of land disputes, more than 50 people have been killed this year from January through July. That’s compared with 61 all of 2016. That’s indigenous groups, rural workers, and land activists that are being targeted here, and usually it is from these illegal gold miners or loggers, though in some cases police and the government are to blame for the violence.

Mike Papantonio: Simone, you’ve reported, you’ve seen these cases firsthand, reported on them, basically, these types of cases in a lot of places around the globe. I’m wondering about this. Brazil’s President Michel Temer, he’s getting a lot of heat for this incident. Why are they blaming his government? What are the grounds for pointing the finger at his direction, especially in this case? Again, I say you’ve probably seen similar situations in other cases that you’ve followed around the globe, but this is an interesting twist, let’s blame the government rather than the people who carried out the murder. What’s your take on this?

Simone Del Rosario: Well, people are starting to see a trend here, and they’re making these connections. A lot of people are making the connection to Temer’s administration. Now, the reason that could be is because FUNAI’s funding, the group that oversees this, it’s been slashed, the agency on indigenous affairs. Now, FUNAI was forced to close five of 19 bases that they use to monitor and protect these isolated tribes, and then in the bases where they didn’t have to close them, they had to reduce the staffing. Now, three of the closed bases of the five were in the Javari Valley, which is exactly where this alleged massacre took place, and it’s also home to 20% of the country’s uncontacted tribes. To give you a picture of the slashed funding, in 2014, this group had a $2.4 million budget. Now their budget is less than $650,000, and the director’s saying, ‘What do I do with $650,000 to take care of all of these isolated tribes?’

On top of that, aside from just slashing funding, Temer is taking cover because of a corruption scandal, something that we’ve been covering a lot of in Brazil, and he’s doing so with the help of the agriculture, ranching, and mining lobbies, and he’s using them to be able to push through economic reforms in Brazil, but to kind of pay them back, he’s been making policy changes that are really impacting deforestation and land rights happening in Brazil. He also tried opening up a large reserve in the Amazon to mining. Now, the judge blocked that, but mining and logging here are really the biggest threats to indigenous communities right now, and as the president is trying to allow them into this land, the constitution protects this land for these tribes that have been here for longer than we can even imagine.

Mike Papantonio: You know, Professors Robert Walker, I think, and Kim Hill coauthored articles that promoted the need for controlled contact with these kinds of tribes, these remote tribes, they believe to prevent incidents like what happened here. What are they advocating, and what is your take on what they’re advocating, Simone?

Simone Del Rosario: Well, Mike, according to Walker and Hill, this no-contact approach is not sustainable, and actually they speculated that massacres like this alleged case would happen without a controlled, peaceful contact. In one paper the professors coauthored in 2015, they wrote that by refusing authorized, well-planned contacts, governments are simply guaranteeing that accidental and disastrous contacts will take place instead, and then this month, Professor Hill telling America’s lawyer that unfortunately, that speculation came true. What they’re advocating is that the governments initiate contact only after conceiving a very well-organized plan. I mean, previously, there’s been poorly-planned contacts that have had devastating effects, especially for these tribes, including death.

They need healthcare professionals and round-the-clock monitoring for more than a year after these people were to give contact, so that’s medical supplies and also food. We’re talking about really vulnerable populations. They have no immunity to present-day diseases and infections. They have not been affected by this yet. In the ’70s and ’80s, there were a lot more contacts that was made with these tribes, and that’s when the population really suffered and the numbers of those populations were slashed, so according to the professors, it has to be an incredibly orchestrated effort, but they believe that isolated populations are not viable in the long-term, particularly as their lands continue to be encroached on, as we’re seeing happen now.

Mike Papantonio: You know, Simone, you’ve got great experience down in this part of the world. What do you think? How does this end? I mean, these tribal members were massacred, the worst kind of massacre, and so we’re saying this investigation is going to cure this? How many times have you seen in third-world kinds of countries where there’s been any justice? What is your personal take on whether there’s going to be justice here, Simone?

Simone Del Rosario: Well, I can tell you this prosecutor that now has two cases, the ability for them to be able to solve it is going to be very hard. That first case they’ve been working on since February, and now we have a new case that goes back to August, and it’s taking miles and miles by boat even to get into these areas, so it’s a very challenging position, and the opinions on what is best for these tribes really vary. The UN and Brazil are on a no-contact approach, unlike what these professors are advocating for, and it really depends on how you want to approach the situation, but there’s arguments for and against both.

The ability to get justice is going to be a little bit hard. The fact that these miners were bragging about it might make it a little bit easier to track them down eventually, but as long as you keep seeing the illegal activity happening in the Amazon, and as long as outsiders can keep coming in and using this land for their benefit and not paying respect to the people that live there and have their own way of life, you’re going to continue to see this happen. It’s probably going to be increasing, Mike.

Mike Papantonio: Simone Del Rosario, thank you for joining me. Thank you for being out there covering stories like this.