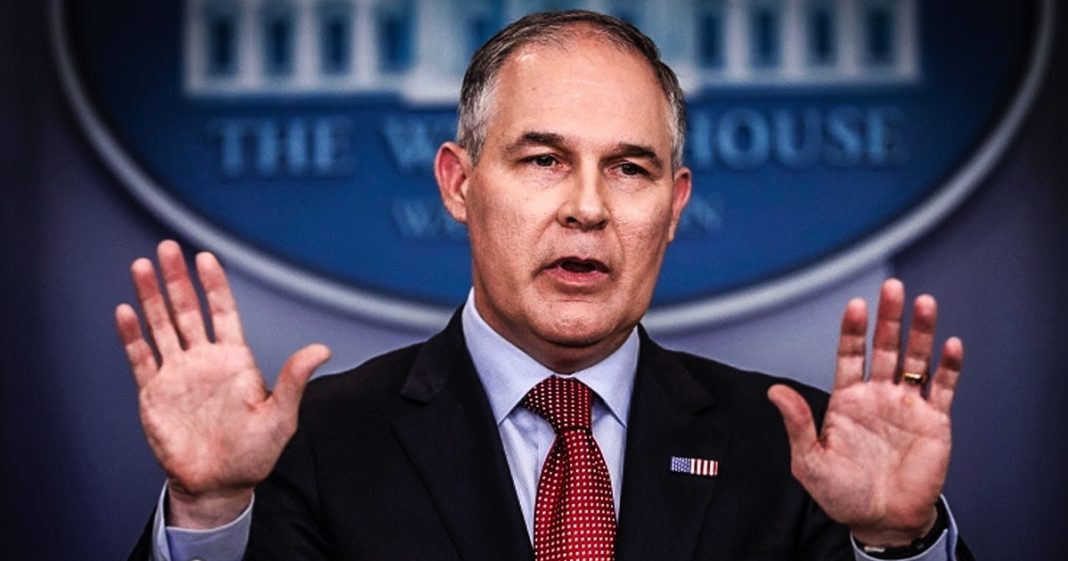 Scott Pruitt, the head of the EPA, has met with executives from industry almost every single day since he became head of the EPA, showing that the agency is no longer working on behalf of the environment and they are, in fact, just another tool for corporate polluters. Pruitt says that he’s doing this to give a “voice” to those who were ignored by the Obama administration, but as Ring of Fire’s Farron Cousins points out, he’s really just giving a voice to the industries that want to operate without any oversight while they destroy the planet.

Since he became the head of the Environmental Protection Agency, Scott Pruitt has met with leaders from industry, fossil fuel industry, chemical industry, industries all over this country. He has met with leaders from industry nearly every single day that he has been in office. Meanwhile, he’s doing absolutely nothing to actually protect the environment here in the United States, which kind of shows us that this EPA that we have now, the current incarnation of it, cares nothing about the actual environment. Their only job is to make sure that corporations have every single thing that they want and that they’re allowed to operate without any form of government oversight.

Now, according to an EPA spokesperson, the reason Pruitt is holding these meetings is because these were the forgotten people during the Obama administration. They didn’t have a voice, and so we’re giving them a voice.

Well, let me explain how your job works, moron, because I don’t think you quite understand it. Your agency is called the Environmental Protection Agency. It’s right there in the title. It’s not the Industry Protection Agency. Environmental Protection Agency. Your goal, your job, your mission, and your purpose is to protect the environment. It doesn’t matter if it makes corporations have to spend a little extra money to clean up the toxins that they’re putting out into our atmosphere and our environment. It doesn’t matter if they have to pay more because they have to deal with some regulations that are going to save American lives. That’s none of your concern. Your concern as an agency is to protect the environment and, by extension, the American people who depend on that environment. It’s as simple as that.

Yet, you have the audacity, Scott Pruitt, to sit there as the head in the Environmental Protection Agency and ignore the people who are dying, ignore the future people who are going to develop cancer, and meet with those heads of industries so that you can give them whatever they want on their dirty energy industry wishlist. Because that’s all you care about at this point. You don’t care about the American public. You don’t care about the environment. All you care about is paying back those industries that helped to put you in office, that have fueled your entire political career all the way back in Oklahoma. That’s what you care about. American people can die as long as you get that campaign money from those industries that you are sworn to protect. Because the hell with the environment. It’s only your job to protect it, right?