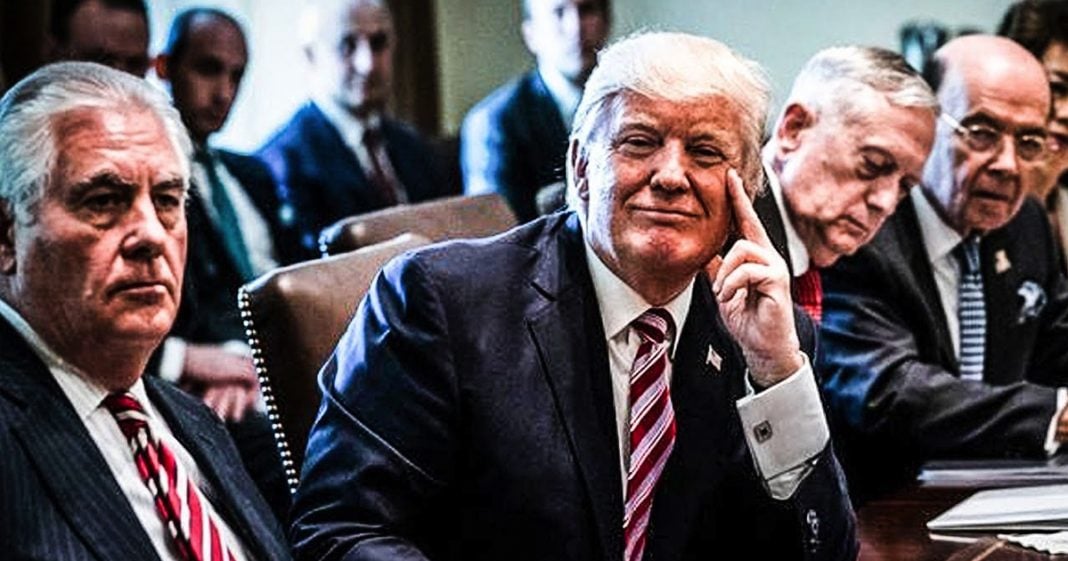 When you serve in the Trump administration, you’re well aware that any day could be your last due to Donald Trump’s volatile nature. Because of that, several high-ranking Trump cabinet officials have formed a “suicide pact” and they will all quit together if any one of them gets fired. Ring of Fire’s Farron Cousins explains why this is certainly not normal behavior for members of a Presidential cabinet.

By now, I’m sure everybody’s heard about the drama that’s been unfolding about Secretary of State Rex Tillerson over the last few days where it was reported over the summer he called Donald Trump a moron. When asked about it in an interview he didn’t refute it, although Donald Trump insists that Tillerson did not in fact call him a moron. Well, as it turns out, as this story was developing, BuzzFeed released a report saying that Treasury Secretary Steve Mnuchin and Secretary of State Rex Tillerson have all formed a kind of suicide pact, meaning that if any one of them gets fired, the other two are going to quit their jobs as well. You can’t lose one without losing all three.

The report didn’t necessarily go on to state why they had formed this suicide pact, but presumably it’s so that they all have a little bit more power within the administration, and so the president knows that I can’t get rid of one of them without losing all three. Now, Republicans have come out in the last few days and said that Tillerson, Mattis, and John Kelly, Donald Trump’s Chief of Staff, not Steve Mnuchin, are the only ones preventing chaos within the White House, so it’s interesting as to why Mnuchin would be included in the suicide pact and not General Kelly, but regardless, Mnuchin’s in there, and to be honest, I say let them go. Let all three of these people go from the administration. They might be preventing what some Republicans are calling chaos from happening within the White House, but not a single one of them is doing a decent job.

None of them are good enough to be doing what they’re doing save maybe for Mattis, but Mnuchin and Tillerson? No. These guys came from industry. They have no idea how the government truly works. Rex Tillerson has been talking to people in Korea and people in Russia trying to work out oil deals for his former employer, the company he ran, Exxon. Mnuchin is a guy who actually should be in prison rather than serving as the Treasury Secretary, so their little suicide pact, I’m all for it, because I’m all for every one of them getting removed from the Trump Administration, because they’re not doing any good.

Oh, maybe they’re preventing Donald Trump from launching nuclear weapons. Maybe they’re not. We don’t know. All we do know is that if Donald Trump actually wanted to do something, he’s going to do it anyway regardless of what these three people tell him he should or shouldn’t do. They’re not serving any actual function within the White House other than to make this country look even worse than it already has gotten under Trump. They are not good at their jobs, again, save Mattis. Mattis not horrible, but Mnuchin and Tillerson, it’s time for these guys to go.

I know Donald Trump wants them to go, so let’s see how serious they are about their suicide pact as soon as Donald Trump decides that he’s had enough of Tillerson and he can’t take this moron talk any longer, because we already know it’s starting to get under Trump’s skin, and we know that Tillerson did not refute the fact that he said it. Let’s see how this unfolds in the next few days, and I’m sure it’s probably not going to go in Donald Trump’s favor, but I’m more interested in seeing if these three people in the administration actually adhere to their suicide pact.