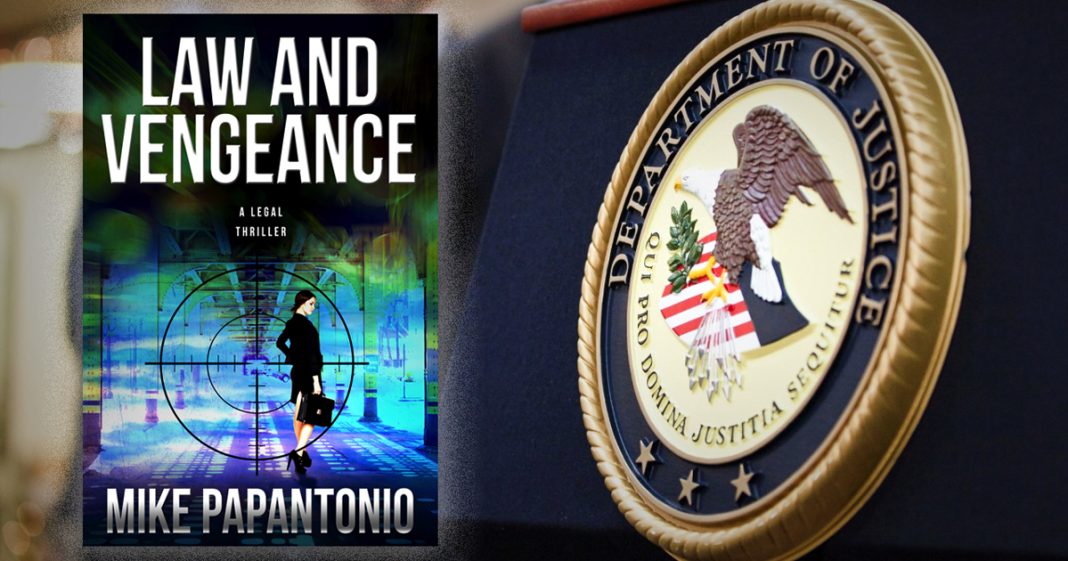 “Law and Vengeance” is based on a true story from the standpoint of the whistleblower and how they are treated like second class citizens. Mike Papantonio’s second novel in his legal thriller series hits bookstores on September 26th!

Most Americans believe that whistleblowers are well protected in this country and nothing’s farther from the truth. We’ve had administrations, the last administration, we would hear the attorney general talking about gee whiz, our priority is whistleblower and if a whistleblower comes forward, we’re going to protect them. We’re going to make sure that we act and we get a result for them and we change the type of thing that they’re trying to change. Nothing is farther from the truth. Whistleblowers become victims more than they become heroes, even when they uncover the worst kind of conduct by Corporate America, the worst kind of conduct. It’s not unusual for the whistleblower to actually end up in jail and the corporation that he’s trying to blow the whistle on pays a fine and nobody ever suffers a consequence beyond that.

This idea that this is easy for a whistleblower, that a whistleblower, yeah he wants to collect some percentage of whatever the case might be and that he’s doing this out of greed. That is so inaccurate. Most whistleblowers what they go through is agonizing simply to do what they know has to be done. Look, we have whistleblowers that have come in that I’ve handled where what they’re talking about is blowing the whistle that’s making a pharmaceutical that they know has the propensity to kill women between the ages of 18 to 35. Now, that sounds like pretty important information and when that whistleblower goes forward and reports that that conduct is taking place, you would expect that the Department of Justice and government would understand how important that is and treat that whistleblower with decency.

They treat them like second class citizens. If they get paid on a case like this, like I just described, they often do get paid but what they go through to get there is agonizing. Law and Vengeance is based on a true story from the standpoint of the whistleblower coming to us, giving us the facts, us doing our due diligence, actually looking into it. It was absolutely accurate. Everything that he said was true. The manufacturer knew that they had a defective product. They kept it on the market anyway knowing that that defective product had the potential to cause death. If you’re a policeman and you’ve got a gun sight and it’s supposed to be a gun sight that works, it just supposed to work all the time and nobody’s told you by the way, you might want to know that when it gets out into the heat or gets into humidity, it has a potential to fail entirely.

People need to know that. The truth is the company did know that. The government was completely asleep as they often are in buying these big purchases. These government contractors get away with absolute anything they want nowadays. This is a government contractor that is no different than most of them. If we think of most government contractors and we follow the history of them, if they commit something, if they commit a fraud in year one, by year three, they’re doing business with the government again. I think most taxpayers would be appalled because taxpayers end up footing that bill for a defective product, for fraud, for loss of billions of dollars, billions of dollars that are just go down tubes because government doesn’t do their job where it comes to reigning in the powers of these weapons manufacturers, defense manufacturers, pharmaceutical companies, you name it. I could go right down the list.

It’s almost as if even when these folks are caught, there’s nothing to suffer. They get paid. They get a fine for a billion dollars. Let me give you an example. A defense contractor that gets fined a billion dollars has probably made six or $7 billion, and so it’s a cost of doing business. They pay the fine. They keep the other six or $7 million and they go their way. Nobody goes to jail. Nobody’s harmed. They’re put on a list for a little while and before you know it, they’re back on the list of defense contractors that can sell to the government. There’s no downside. It’s simply cost of doing business.