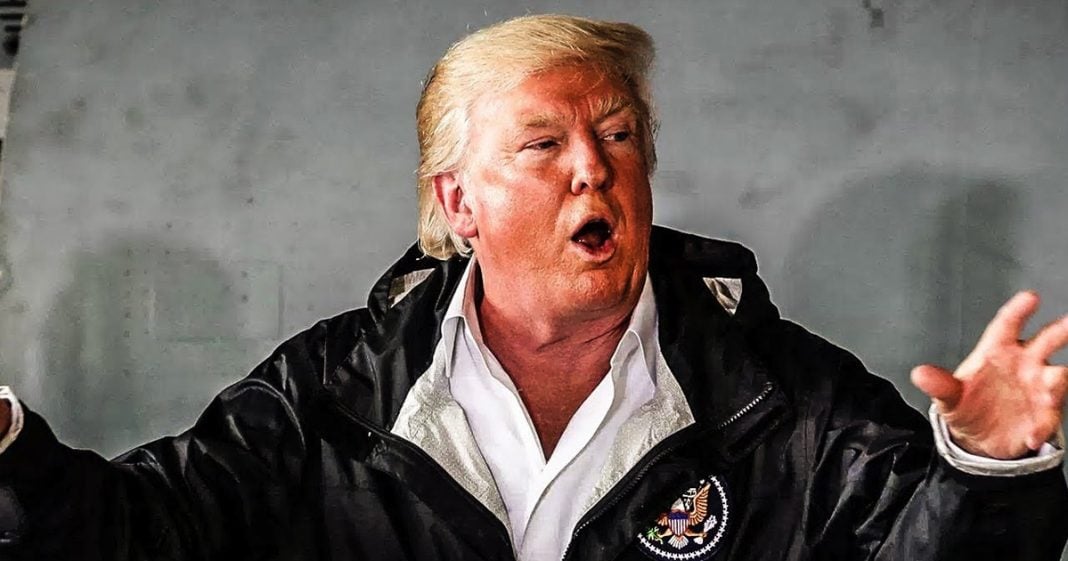 Nearly a week and a half after Hurricane Maria hit the island, Donald Trump finally headed down to Puerto Rico to check things out for himself. And from the start, he made a complete jackass of himself. He told the victims that they had “thrown our budget out of whack,” he told them that their disaster wasn’t a “real disaster like Katrina,” and he performed one of the worst photo ops of all time by throwing paper towels to a crowd. Ring of Fire’s Farron Cousins explains why Trump’s trip provided no relief for the island, and made Trump look even more heartless and stupid than ever.

On Tuesday of this week, after nearly a week and a half of waiting, Donald Trump finally made his way down to Puerto Rico. Now, before we get into what he actually did in Puerto Rico, let’s point out the fact that on Wednesday morning Donald Trump woke up and decided to attack the media once again. Specifically, he was trying to call out what he called, “Fake news,” how they were covering his trip to Puerto Rico. “It was all fake. Everything they’re saying is wrong.” They’re trying to make him look bad, folks. Now let’s get back to what actually happened on Donald Trump’s trip to Puerto Rico. Well, to kick things off he told them that, “You’ve kind of thrown our budget a little out of whack.” As if they somehow got hit by Hurricanes Irma and Maria on purpose. Yeah, they did that because they wanted to throw the federal government’s budget out of whack. Totally intentional. Basically, just a big F you to the President there, right?

Of course, to his credit Trump said, “But, that’s okay,” after he made that horrible remark to them. Then, later on he told them, “Wow, only 16 people dead. That’s nothing. That’s not a real disaster like Hurricane Katrina, where you had thousands of people dead.” Let’s be clear real quick, only 16 people have been certified, declared dead in Puerto Rico. There are many more who are dead. They just can’t get around to it yet, because the morgues are full. They don’t have anymore room left in the country to count the dead and mark them as certified dead. Plus, doesn’t matter if it really is only 16, you don’t downplay somebody who’s in the middle of a disaster by saying, “Oh, that’s nothing. You should see what happened back on the mainland. Phew, that was bad. You guys are lucky.” Third, I understand that anytime a President or elected official goes to a disaster area, they’re just looking for a good photo op, right?

I mean, that’s what it’s all about. They’re not actually there to do anything constructive, they just want the photo op. It happened with all Presidents, Democrat or Republican. Donald Trump and Puerto Rico gave us what might be the worst possible photo op I have ever seen from a President or really any politician ever. In the midst of a crowd who’s suffering, majority of the country does not have clean water to drink, or to use to cook with, majority of the country still without electricity, tons of people whose homes are now rubble, Donald Trump decides it’s a good idea to start picking up paper towels from in front of him, a supply table, and starts tossing them into the crowd as if he’s tossing out goodies, T-shirts at a baseball game or a football game.

Just, “Here you go. One for you. Yeah, here you go. Here’s your paper towels. Sorry you have nothing to drink. Sorry that I’m not letting my administration lift the rules so that you can use food stamps to buy prepared meals because you have nothing to eat. I’m sorry that when you try to leave the island, I’m making the government hold onto your passport so that you reimburse us fully for your plane ticket. Here’s a roll of Brawny.” Yeah, that’s going to do a whole hell of a lot of good. Overall, the response from people within Puerto Rico was that Donald Trump’s trip was an absolute disaster. San Juan Mayor, Carmen Cruz, called his comments, “Absolutely disgusting.” What Donald Trump did do was he did praise the Puerto Rican Governor for praising Donald Trump. The only good thing he had to say about anybody in Puerto Rico was that they had good things to say about him.

He turned this entire disaster into something that is about him. This was one of the worst responses I have ever seen from a President in terms of disaster response ever. He should not have gone. He didn’t do anything constructive. He’s not helping those people. He’s screwing them over at every single turn. Again, got the worst photo op in presidential history. Donald Trump could do real things to help the citizens of Puerto Rico. Throwing paper towels at them is not one of those things.