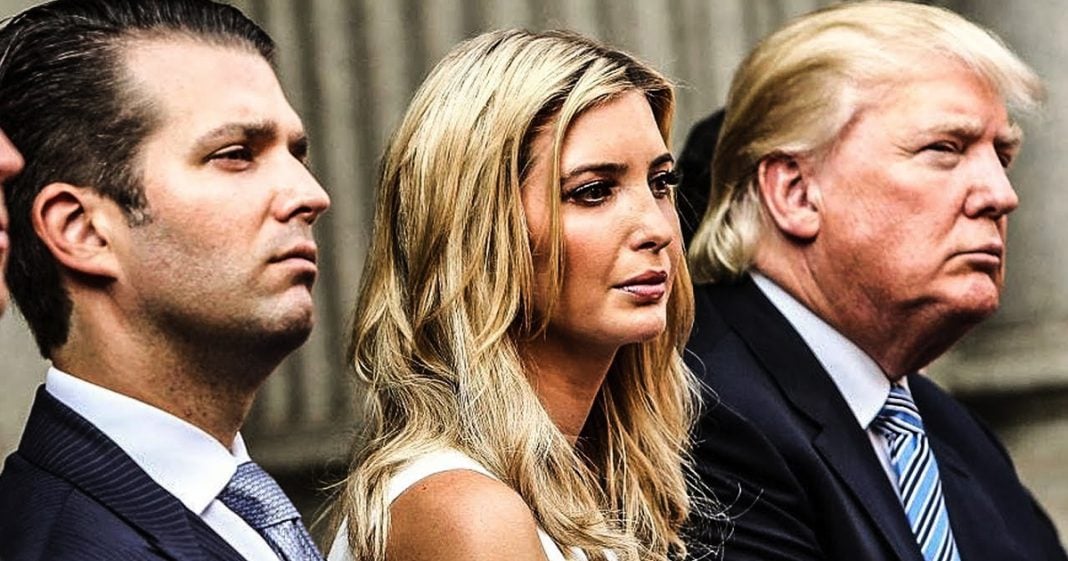 According to a bombshell new report from ProPublica, Donald Trump’s lawyer managed to squash a fraud investigation that centered around Ivanka Trump, Donald Trump, Jr., and Jared Kushner by donating tens of thousands of dollars to a New York district attorney. Some of the money was returned, but Trump’s lawyer Marc Kasowitz still raised and donated even more to prevent the Trump family from serving time behind bars. Ring of Fire’s Farron Cousins explains what happened in this investigation and why it might not be over just yet.

A bombshell new report from ProPublica shows that Ivanka Trump, Jared Kushner, and Donald Trump Jr. were basically set to go on trial for committing fraud back in 2010. What kept them out of prison? Well, that happens to be Donald Trump’s lawyer Marc Kasowitz, who decided to donate tens of thousands of dollars to the election of a district attorney in the state of New York who effectively dropped the case against Trump, Trump Jr., and Kushner.

Here’s how it all began. Ivanka and Kushner were sending out emails explaining how they were lying to potential investors about how quickly new properties, new condos, at their SoHo hotel and condominium complex were selling. As it turns out, they weren’t selling very well, but they wanted to convince investors otherwise, so they’d be more likely to come in and buy some of the units within that building. That, ladies and gentlemen, is fraud. You cannot defraud investors by misrepresenting the assets that they are buying, or misrepresenting how much other people are also putting into the investments. Now, Trump Jr. got on board with this after Ivanka and Kushner originally pushed it. He knew about it and continued to double down on it after they had initially set this lie in motion.

Well, New York fraud office got involved, and they decided to go ahead and bring charges against the three. This is where the election of that district attorney comes into play, because Marc Kasowitz, again, Donald Trump’s personal lawyer, first donated $25,000 to the campaign of this district attorney. The money was returned, but after the money was returned, he decides to drop the case because, according to him, he didn’t see that there was commission of a crime beyond a reasonable doubt. After he dropped the case, Kasowitz donated and helped raise more than $50,000 for that district attorney, basically as a way of saying thank you for not throwing my client’s children in prison.

Here’s the good thing. Just because the DA decided not to pursue the charges against Trump, Trump Jr., and Kushner does not mean that the case is dead, folks. All it means is that it’s more fodder for Robert Mueller, the special prosecutor, to use against the Trumps to hopefully put them all in prison. There is no question that Ivanka, Jared, and Don Jr. committed a crime here. There is also no question that Donald Trump’s lawyer’s political donations kept these three morons out of prison … for now. That’s the key part to remember. He kept them out of prison for now. Once the Mueller investigation concludes, I hardly think that any political donations from anyone at that point is going to keep any member of the Trump family from not going to prison.