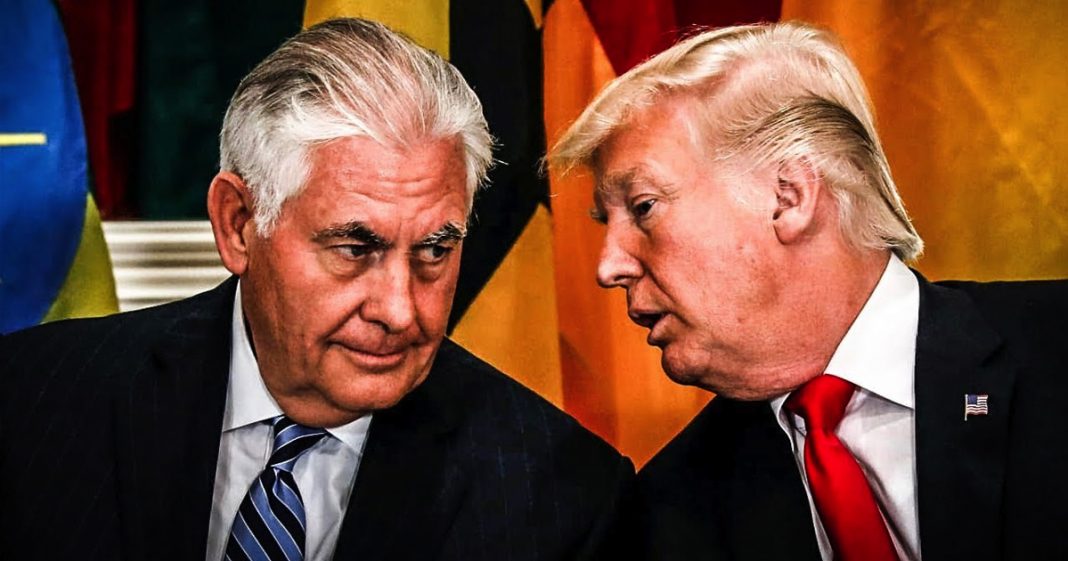 Donald Trump’s Secretary of State, Rex Tillerson, reportedly called Donald Trump a moron during a Pentagon meeting this past summer and was prepared to resign before members of the Trump administration talked him out of it. Trump recently undermined Tillerson in a Twitter rant, telling him that he was wasting his time trying to play nice with North Korea. Ring of Fire’s Farron Cousins discusses this.

According to reports back in July, Rex Tillerson attended a Pentagon meeting, where he referred to President Donald Trump as a moron. I never thought I would have to say this coming phrase here, but I 100% agree with Rex Tillerson on this issue. You see, Tillerson made the comment that Donald Trump is a moron, after Trump said that we’re doing very well against ISIS. ISIS is falling all around the world. Their numbers are going way, way, way down. That’s not true. That’s not true by any measure, whatsoever, So Rex Tillerson called him on it and called him a moron.

After that, Rex Tillerson became so enraged and just, I guess, disillusioned with the president that, according to reports, he was going to resign. He was all set to resign in July, until other members of the Trump administration finally talked him out of it.

Earlier today, the Council on Foreign Relations president called for Rex Tillerson to resign. That was after this report initially surfaced. He said Rex Tillerson should resign.

Earlier this week, Donald Trump undermined Rex Tillerson on Twitter saying, “You shouldn’t try to play nice or negotiate anything with Kim Jong Un over in North Korea,” but that also Tillerson was doing a really great job. Now we know the truth. Tillerson thinks Donald Trump is a moron. Donald Trump thinks Rex Tillerson is wasting his time.

Rex Tillerson wanted to resign. Members of the Trump administration did not want him to resign. We don’t have a very clear reason why they didn’t want him to resign, but I’m going to go ahead and throw out a theory here, because all the evidence supports it. Rex Tillerson, though he is a horrible human being, do not get me wrong about that, he’s not as insane as Donald Trump. Rex Tillerson doesn’t want to destroy the world with bombs and guns. He wants to destroy it with pollution. He understands, albeit, for greedy, disgusting ends, that he can’t go and bomb the hell out of everybody in this world. He has to go over there and work on negotiations, and that is exactly what he’s doing.

Unfortunately for us, he’s also trying to negotiate new pipelines, new oil drilling leases for his old company, Exxon. But at least, he’s not trying to start a war. I mean, I guess that’s good. The pollution that’s going to be created as a result of Tillerson’s work is going to kill a lot of people, so that’s horrible.

I don’t know what’s better at this point. Donald Trump has stacked his cabinet, his administration, with some of the most evil, thoughtless, horrible people on this planet. Is it worth it? Is it worth a war now to prevent massive pollution in the future? Or should we prevent the war, prevent the pollution, by getting the Trump administration out of office? Because at this point, that’s our only option to prevent mass deaths in one form or another.