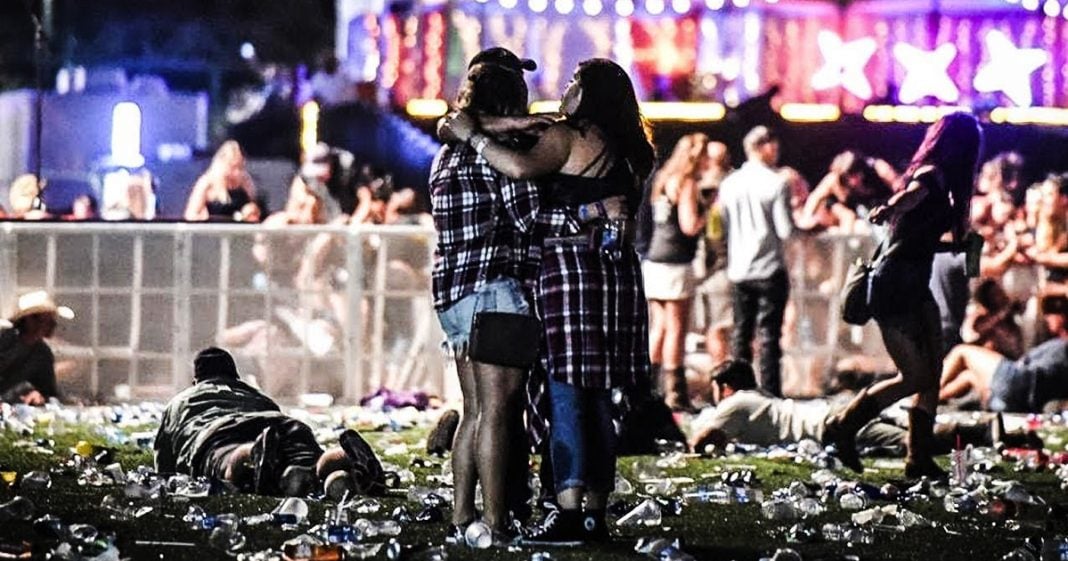 Republicans are desperate to find some kind of scapegoat in the wake of the deadliest mass shooting in US history, and they are throwing everything they have at the media to see what sticks. Rather than blaming our lenient gun laws that they helped pass, they have blamed Democrats, CNN, the NFL, and all sorts of other liberal boogeymen for this atrocity, as Ring of Fire’s Farron Cousins explains.

In the wake of the Las Vegas mass shooting which again was the largest, deadliest mass shooting in the history of the United States, Republicans are scrambling to try to find something to blame for this atrocity, rather than the very lenient gun laws that they help put in place all over the country. Here is a list of some of the things that Republicans are blaming this shooting on.

First and foremost, ISIS. Now, originally ISIS came out after the shooting and took credit for it, at least according to some media outlets. Was it turns out the 64-year-old white shooter had no connection whatsoever to ISIS and so that link was blown up. Rush Limbaugh, however, is not given up on it. He is still trying to convince his listeners that this was an act of Islamic terrorism here in the United States meant to instill fear in the white people.

Pat Robertson has a different theory. Pat Robertson does not see this as an act of the terrorism from ISIS. He sees it as the result of disrespect towards Donald Trump, specifically disrespect towards Donald Trump coming from the NFL. According to Pat Robertson, these NFL players who are out there kneeling to protest police brutality, somehow they are responsible for the deaths of these people in Las Vegas. Now, I know Pat Robertson has made many leaps in the past trying to link things like homosexuality to hurricanes, but blaming NFL players for this mass shooting is right up there among some of the more crazy things that this man has ever said.

Fox & Friends had a guest on earlier this week, and they think they know who is responsible for this atrocity: CNN. According to Fox News, CNN is responsible for this, for demonizing gun enthusiasts, as they call them on on Fox & Friends. So, we have ISIS, we have the NFL. We have CNN, for God sakes. Other people like Alex Jones believe this guy was a liberal plant. He was a professional shooter, according to Alex Jones, hired by Democrats to come shoot up this music festival so that they could then push for stricter gun laws. Another right-wing talker, YouTube star James Allsop says this is just simply the wrath of God for us straying away from his word, which I’m assuming is Republican alt-right code for blaming it on homosexuality. So, ISIS, NFL, CNN, Democrats, disrespect to Trump, and homosexuals causing us to steer away from the word of God.

I have a different theory. I’m going to go ahead and say it’s because of our lenient gun laws here in the United States. The dude had 43 guns, 43 high-powered rifles, all obtained legally. Not all of them were in that hotel room with him, the majority of them were. All obtained legally and not once did it ever raise a red flag among anyone that this man was stockpiling high-powered rifles and ammunition. That’s the problem.

First of all, we shouldn’t have these guns available, these killing machines available for United States civilians. These guns were designed for one purpose and one purpose only: to kill as many human beings in as little time as possible. No civilian in this country ever needs that kind of power, ever. I understand how they could come in useful for the military. I may not agree with it, but I understand that. I get it. But civilians, no. There is no excuse. There is absolutely no excuse. We have to do something about our gun laws here in the United States. And again, I’m not saying go around and take everybody’s guns. You can have a gun for protection, if you feel like you need one. You can have a pistol, because that’s really all you would need.

If somebody breaks into your house, one or two people, you’re going to pull out an AK-47 and start shooting off three, four hundred rounds into your own home? No. That’s idiotic. No human being would do that. So, why not a handgun? If you feel like you need one, that’s okay. If you pass a background test or checked, if you pass a field test, a shooting test, and get licensed, fine, but these high-powered killing machines have to go. And I’m sick and tired of hearing Republicans blame everything else under the sun for this shooting without once talking about the fact that it is too damn easy to get your hands on these major killing machines here in the United States.