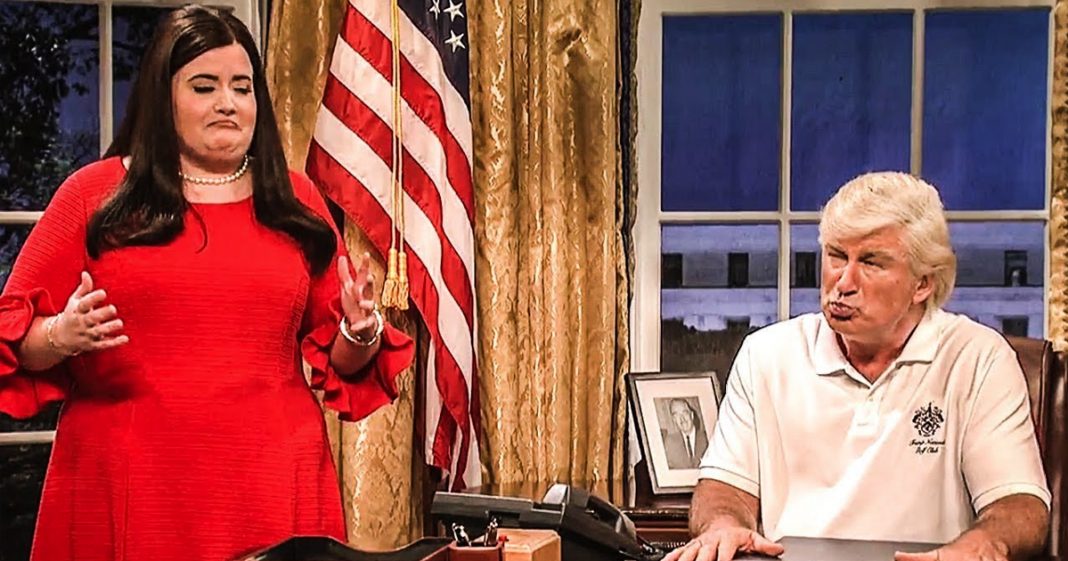 Saturday Night Live began their new season this past weekend, and now that Sean Spicer is out of the picture, they are skewering new White House Press Secretary Sarah Huckabee Sanders. Alec Baldwin returned to play the president in the premier, and as Ring of Fire’s Farron Cousins explains, this season of SNL will certainly be one that Donald Trump will not enjoy.

This past weekend Saturday Night Live had their season premiere and just like last year they spend a good amount of time, in fact they actually opened the show attacking the Trump Administration. But, since they no longer have Sean Spicer or Reince Priebus or Stave Bannon or any of the usual suspects this time they spent a good amount of time going after new White House Press Secretary Sarah Huckabee Sanders. Let’s take a look.

“Sarah Huckabee Sanders”: Mr. President I’ve gotta be honest, this is only gonna get way worse.

“Sarah Huckabee Sanders”: Thank you sir. I think it’s because folks listen to me because I’m no nonsense but I’m all nonsense.

What’s funny about this and this is actually not even the first time they’ve sent up Sarah Huckabee Sanders, is that they’re almost running out of people within the Trump Administration because everybody’s been fired and yet somehow the people who remain within the Trump Administration are just as bad as all of the people who have either quit, been fired, or resigned. So, there’s no shortage of people to make fun of technically but it is ironic considering the fact that we’ve seen some really horrible people go. Yet there’s still just as many horrible people still left in the Administration.

Sarah Huckabee Sanders coming out and saying I’m no nonsense but I’m all nonsense. That is exactly how the American public sees her. We do not believe anything that comes out of her mouth, yet somehow with her little folksy accent and politically connections from her father, some people in this country still seem to think that she’s a real trustworthy kind of person. Well she’s not. Saturday Night Live understands that so they pounce on it. Right now one of the best tools we have against the Trump Administration are comedy shows. Comedy shows, late night TV show hosts, Seth Myers, Samantha B., Jimmy Kimmel people like that are out there yes roasting the administration but more importantly also teaching the American public about what’s actually happening in this country in a straight forward way that everybody can understand. That’s what the late night hosts are doing and that’s what Saturday Night Live is doing and it has all proven to be a tremendous service to the people of this country.