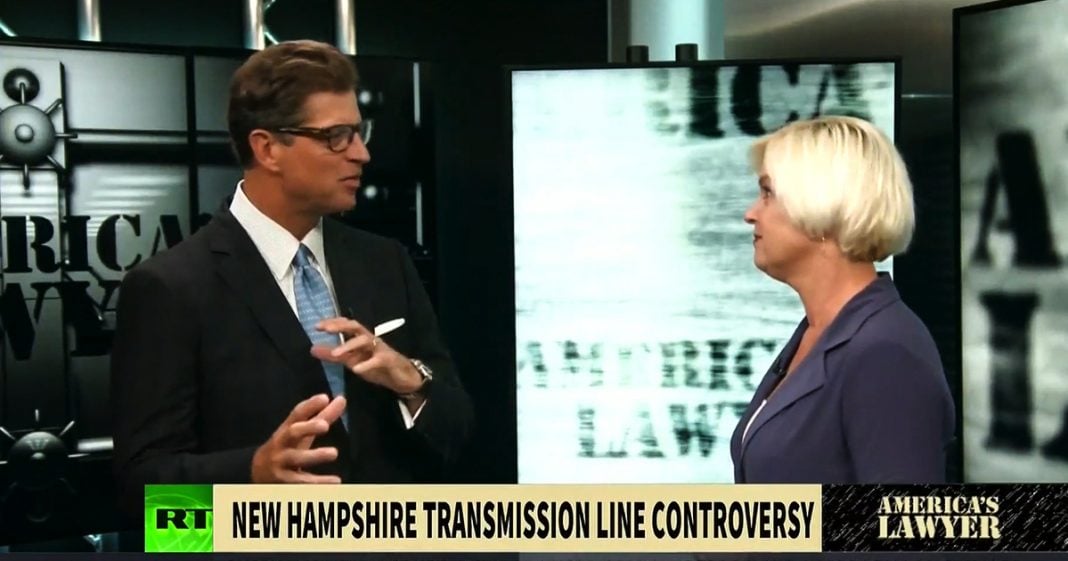 Via America’s Lawyer: Attorney Peter Mougey is joined by Mollye Barrows, Journalist for Trail Lawyer Magazine, to tell the story of the controversy over a transmission project residents of New Hampshire strongly oppose.

Peter Mougey: New Hampshire residents are challenging the proposed 180 mile power line project of Northern Pass that will run through most of the state. One small town is even taking in donations for a legal fund that they have been using to keep the fight going strong in court. Joining me now to talk about this is legal journalist for Trial Lawyer Magazine, Mollye Barrows. Mollye, thank you for coming.

Mollye Barrows: Definitely. Glad to be here, Peter. Glad to have you here filling in for Pap today.

Peter Mougey: Thank you. So why’s this project controversial? What’s the big deal?

Mollye Barrows: Well, it seems like the entire state of New Hampshire is opposed to this project. It’s been off and on the radar for a number of years now. It’s basically a collaboration project between two power companies. One out of Quebec. In fact, it’s called Quebec … Where is the name of this? Hydro Quebec is that one company, and then the other energy provider is Eversource, which is based in New Hampshire. So for years they’ve been trying to bring this new basically an extension of this Canadian power company through New Hampshire claiming that it would have greener energy, it would bring lower energy bills, that it would provide jobs, and then, of course, there would be more taxable value to all of those things. But a number of people are opposed to this and have been for a long time whether it’s citizens or environmental groups or government agencies.

So the small town of Deerfield is one of them. Basically, all their concerns are it’s not going to look good. New Hampshire’s a beautiful state. We’ve got a lot of forests. We’ve got a lot of hiking. We’re got a lot of conservation land, a lot of animals, and natural fisheries that we want to protect. They’re concerned that all the work that will go into this, whether it’s creating dams and reservoirs or utilizing the ones that they’ve already got, that it’s going to create more problems. There’s a Canadian Indian tribe that’s based in that area. They’re also concerned about delicate salmon fisheries, violating their hunting lands. So you name it, everybody’s got an ax to grind with this project. They have been back and forth to the drawing board several times.

Peter Mougey: Now, is this part of the trend? Everybody’s heard about the Dakota pipeline that everyone challenged. There was huge protests. The federal government brought in. Do you think this is part of that trend? Is this a similar objection? Are there some overlap between the two?

Mollye Barrows: Well, I think some of the overlap could very well be the issue of private citizens and corporate going up head to head against corporations. Whose interests are better? Who’s got the most influence in Washington? I think that’s a lot of what you saw in the Dakota pipeline process. I think what you’re seeing in New Hampshire is less of that and more of perhaps at one time they might could have gotten away with something like that, but you’ve got all eyes on this project pretty much since the beginning and, I hate to say it, but almost a more influential group of citizens. More than 160 individuals, government agencies, as well as regular environmental groups that are opposed to this project, and they’ve all been speaking out in different ways. Everything from we want your power lines buried. We don’t want them above ground. They’ve gone back to the drawing board two or three times just to revise the location.

Even imminent domain is another issue that could cross between this and other projects where a company wants to come in and just do a land grab based on right of way in order to serve the public need, the greater good. But in this case, the entire state was so opposed to it that the New Hampshire legislature took the step in 2012 of basically outlawing the process of imminent domain when it came to power lines. I mean, there were some caveats.

Peter Mougey: So Deerfield went out and they actually started raising money?

Peter Mougey: I mean, once they got the money in, what have they done? What’s the method that they’re using?

Mollye Barrows: Well, this 192 long mile power line project will end in the small town of Deerfield. In fact, it’s going to cross some 30 some small towns right through the middle of the state, right through the middle of these towns. Again, they’re worried about aesthetics. How’s this going to look to our town? Is it going to impact tourism? We just don’t want it in our town. So essentially, they’re trying to hire an attorney. They’ve been working with an attorney for the past year. Now, last year the citizens voted not to fund an attorney specifically to fight this, but there are enough citizens in this town that saw we do want to fight it, we’re going to fundraise.

Peter Mougey: So they’re fighting it?

Peter Mougey: In closing, tell me where’s the legal case stand? Where is it now?

Mollye Barrows: Well, right now, they don’t even have state approval. So they’re still going through the state permitting process. There’s a state committee that will continue to hear people on this issue, have hearings on it through December. Then in February of next year is when they’re going to decided whether or not the project moves forward. So in some situations, if they do decide to move the project forward, some citizens may be happy with how it turns out. Perhaps they got the plan moved, they got power lines under ground. Whatever their particular was may be addressed, but I don’t know who they’re going to make everybody happy. But at least there’s some leeway. It’s not just a black and white as in the Dakota pipeline issue. We’re going to move forward whether you like of or not.

Peter Mougey: We’re going to shove it down your throats.

Peter Mougey: That’s New Hampshire versus some of the other companies maybe?

Peter Mougey: Right. Well, thank you very much, Mollye, for coming. We appreciate your time.