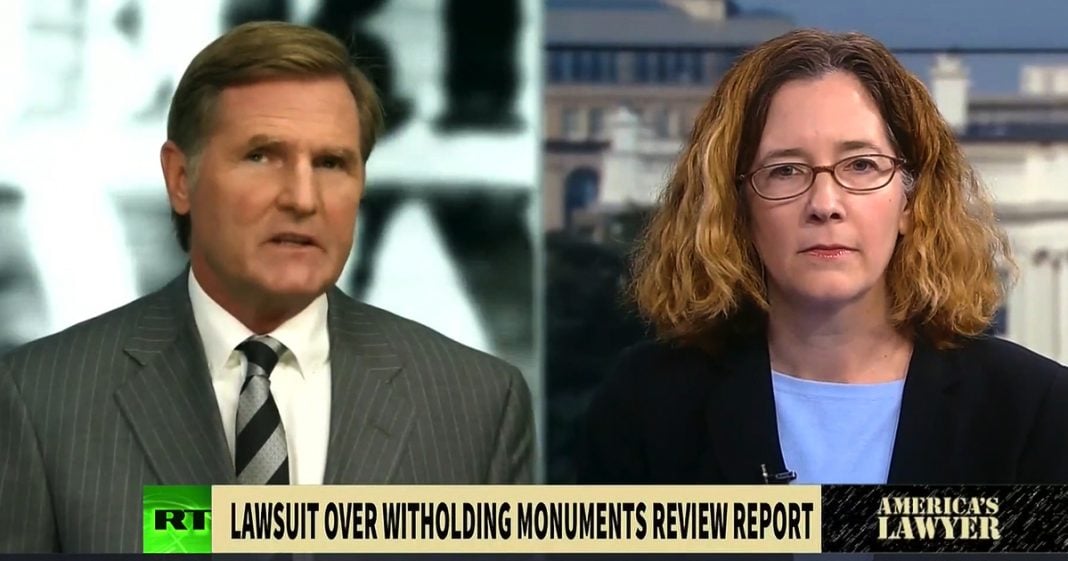 Via America’s Lawyer: Mike Papantonio talks with Christy Leavitt of Environment America about the lawsuits over keeping the monuments review report a secret.

Mike Papantonio: Environmental groups are taking President Donald Trump’s administration to court for withholding documents they requested related to the Department of Interior’s review of National Monuments designated by Presidential Authority under the Antiquities Act. While environmental groups are still waiting for their Freedom of Information Act request to be answered, they still say stripping federal protections from land designated as monuments is unacceptable. Joining me now to talk about this is Christy Leavitt. She’s Director of Partnership of Environment America. So, the Interior Secretary submitted his recommendations for Trump. I’m interested to know what’s happened so far? Have you kind of run into a wall there?

Christy Leavitt: Yeah. There isn’t a whole lot of information that’s out there about what the Interior Secretary recommended. What we do know is that people around the country love their public lands, and we’ve seen that from poll after poll. We’ve seen that from talking to people around the country. We’ve seen that from the very large number of comments that were submitted as part of the public comment period around these National Monuments protections. If you look at just in two weeks, the first two weeks of this comment period was specifically about Bears Ears National Monument, which is a monument in Utah. More than 685,000 comments were submitted during that time, and over the course of the whole comment period, more than 2.8 million comments, with 98% of those calling for supporting our public lands and waters and keeping them fully protected, so-

Mike Papantonio: Wow. Okay. First of all, let me thank you for doing what you do. Okay, let me thank you and your organization of doing what you do. The answer is these lands, if they’re made available to mining and logging and drilling, we’re going to lose them. I mean, isn’t there great suspicion by people who’ve seen this in the past? Every time we give up land for some reason, it ends up in the hands of some large corporation. We don’t have rights. It’s not commons anymore. We don’t have the right to use that. I mean, isn’t that kind of the way we’ve seen historically? The corporation may argue, ‘Well, gee. We’re not going to completely block public access. We’re not going to completely exploit everything,’ but in the end, that’s what happens. Isn’t it?

Christy Leavitt: Yeah. One of the reasons why we’re really concerned about these areas, and our members are, and other environmental groups are, is because each of these National Monuments has been protected, because it’s facing some threat. Whether it is drilling, whether it is mining, whether it is for the oceans areas, over fishing, or whether logging’s in some of the areas. Each of them is facing a definite risk. It’s been protected from that risk, but even if the monument is kept in place but it’s shrunk, that has a terrible impact on what’s protected.

So, it means any of those lands or waters that are no longer in the boundaries of that monument could be opened up to any of those destructive activities. Whether it’s drilling, whether it’s mining, whether it’s logging, all of those create big problems for any of the monuments. If you look at just one of the monuments, so there’s Oregon Mountain Desert Peaks is one of the monuments in Southern Utah that is on this list of review. This is a beautiful area in … Sorry, Southern New Mexico is what I meant to say. It’s a beautiful area in New Mexico that has been protected. It’s got mountain ranges. It’s got deserts. It’s got grasslands. It’s protecting a variety of different species, including mountain lions, bighorn desert sheep; a whole a host of things.

It’s also got some artifacts from 2,000-8,000 years ago that were from some of the first inhabitants of New Mexico. So, with all of that, it’s a special area to stay protected, and some of the threats it’s facing include development. It’s in one of the fastest growing counties in New Mexico. If it what no longer protected as a monument, the federal government could decide to sell the land to developers. There’s also been rare earth minerals that have been found in the monument lands, and mining in any of these National Monuments would be disastrous. Rare earth mineral mining in these areas would be terrible-

Mike Papantonio: Well, let me ask you. It’s very clear; you know the statistics. You stated the statistics as well as we all know. Anybody who reads about the importance of these commons land to the American public, it’s overwhelming that the American public wants these lands held in common. When you look at, really, some of the most conservative politicians in the history of this country have understood that. Teddy Roosevelt’s been a pretty good example. I mean, he said, ‘We’re so tied to our rivers, we’re so tied to our forests and the natural beauty of this country, that Americans want to protect it.’ Now that’s before he had any polls telling him that.

Mike Papantonio: That’s when he just understood he was connected to what Americans were thinking. Nothing has really changed there. I mean, there’s still that same attitude. For example, when it comes to Bears Ear’s Monument, Republicans in Utah say it’s outrageous how much land was federally protected under Obama, but when you ask the American public, ‘Is it okay that that’s protected?’ They’re going to say, ‘Absolutely. We want that land protected. We want use of it for our families. We want the generations after us to have the same benefit of this great American expanse.’

What is it that you’re doing? What does your organization do to educate the public about the importance of this? Everything you do, obviously it all endures to a benefit for all of us, and we appreciate that, but are you able to get the message out about what’s really happening day-to-day in D.C.? People don’t know what’s happening day-to-day.

Christy Leavitt: Yeah. We, as you mentioned, the American public really cares about these issues. Our members definitely care about these issues, so we’ve been communicating with them over e-mail. We’ve been talking to people face-to-face. We go door-to-door around the country during the Summer and throughout the year, and we’re talking to people about these issues. Whether you’re up in Maine, and you’re concerned most about Katahdin Woods and Waters National Monument, or you’re out in California and concerned about the Giant Sequoias and Giant Sequoia National Monument.

You mentioned Teddy Roosevelt. The Grand Canyon was originally protected as a National Monument by Teddy Roosevelt, so he had the foresight to protect that area that eventually became one of the most popular National Parks anywhere. Now, thousands and actually, millions of people go to visit it every year. We’re continuing to educate our members, continuing to educate the publics about the threat. People should let their members of Congress and Senators know about it, let the White House know that they want these areas protected.

Mike Papantonio: Yeah. It is amazing when people know, I mean, this is the simple thing about environmental type cases and Antiquities Act type cases, is when people know what’s at risk, if they’re communicated with and they embrace that, 90% of the time, people are going to say, ‘Yeah. We want this protected.’ Unfortunately, what happens in D.C. an awful lot, is they do a lot of this behind closed doors. They do it during the time when there’s another issue taking place. They do it on a Friday afternoon where nobody’s paying attention. They do it during hurricane season. It’s awful the way they go about trying to take away public lands, but thank goodness you’re out there, and thank goodness your organization is out there. Please continue doing what you’re doing, which is to keep us informed. Thanks a lot.