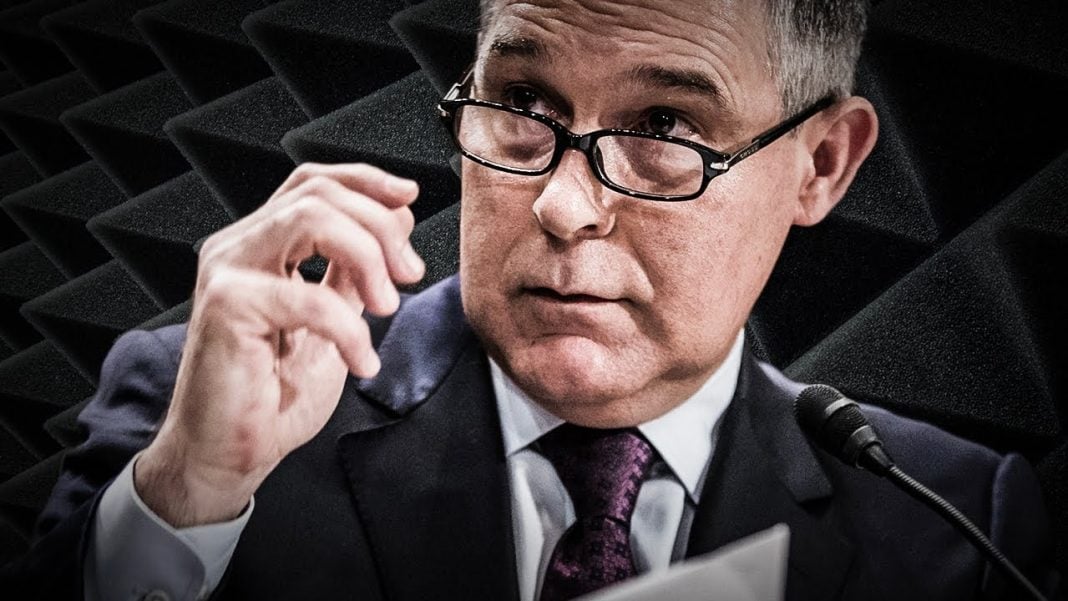 In an unprecedented and entirely suspicious move, the EPA has decided to spend $25,000 in taxpayer money to create a soundproof booth for EPA administrator Scott Pruitt to hold private conversations. This is just the latest maneuver by the head of the EPA to create a sense of privacy in his offices, and it can only mean that he’s having conversations that he doesn’t want the public to know about. Ring of Fire’s Farron Cousins discusses this bizarre and scary move.

According a new report EPA administrator Scott Pruitt has been approved to spend $25,000 to create a soundproof booth in his office at the EPA so that no one can hear his conversations, so that he has a safe space to take people and talk to them without any chance of anyone else overhearing and reporting on what is being talked about in those conversations.

$25,000 to create a soundproof room so that the American public can’t know what the EPA administrator is talking about. This actually isn’t one of the grossest stories that have come out of the EPA recently. We also learned that the EPA was requiring people who work there to turn in their cellphones or any other personal devices so that they could not record or make notes about any conversation that they have with EPA administrator Scott Pruitt.

We already know. Story came out earlier this week that he met with officials from a mining company and then immediately turned around and granted a new mining permit for them to go ahead and destroy a large portion of the environment. EPA administrator Scott Pruitt is working for the industry. He is not working for the American public. He’s not working for the environment, that’s for sure. All he’s doing is working with the industry, making sure that they get everything they want, that they extract every possible natural resource out of our ground, put as much pollutants as they want into our air, and our water, and our earth, because that’s the only thing that matters.

Why? Because a guy like Scott Pruitt’s going to be long dead before we see the real horrifying effects of climate change hit the United States. 20, 30 years these guys are all, they’re not going to be around anymore. They don’t care. Neither did the CEOs who run these companies that are destroying the planet. They don’t care. And now they don’t have to care. Because we’re not going to know about it. Scott Pruitt’s going to go in his own little snowflake approved safe space where nobody can hear what he’s talking about, and meet with these people, plan all sorts of environmental destruction, while the rest of us don’t know a damn thing that’s going on.

That is not how a transparent democracy works. I know we’ve had issues with transparency during the Obama administration, we had them during Bush administration, we had them for a long time. But creating yourself a $25,000 at the expense of taxpayers soundproof booth, take secrecy and privacy to an entirely new level. I mean that’s a kind of sneaky shit that even Donald Trump hasn’t tried to do yet. Although once he sees that if it works for Scott Pruitt, maybe he’ll soundproof the entire White House so that nobody can overhear his conversations and report that to the press.

This is a dangerous precedent being set by the EPA here and we should demand that our tax dollars, this $25,000 to pay for his little soundproof safe space gets returned to the American public, and if he wants to soundproof that room, he can pay for it out of his own damn pocket.