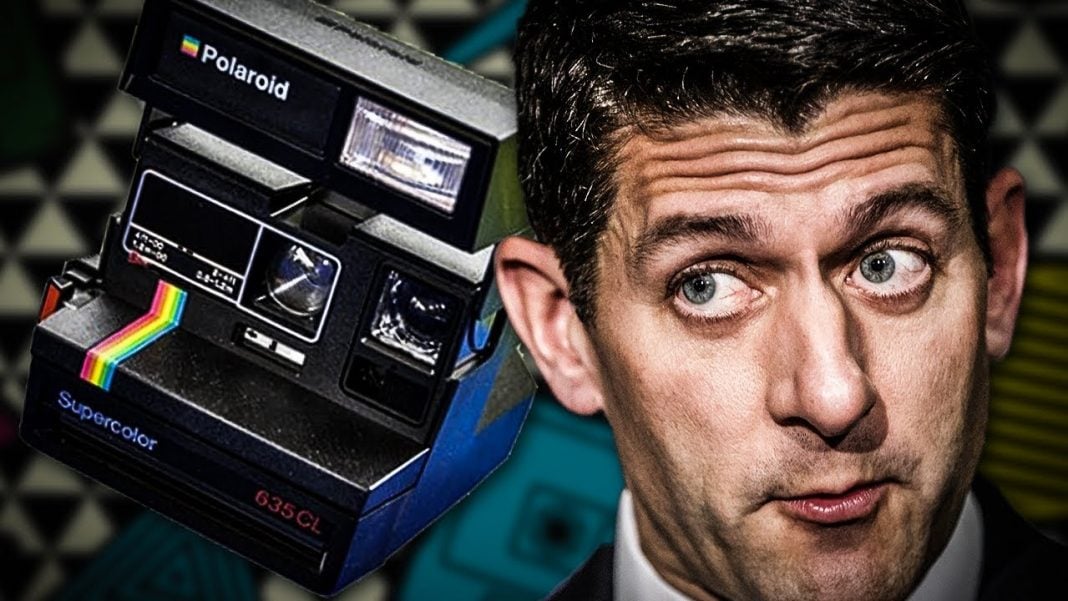 Paul Ryan has been on Twitter nonstop in recent days, promoting a tax policy that would send this country right back into a recession. And in his Tweets, he tries to be clever, showing pictures of items from 1986 (like cameras and phones) and comparing them to those objects today, saying things like “Phones have changed a lot since 1986, but our tax code hasn’t.) Apparently Paul Ryan’s talking points haven’t changed since 1986 either, as Ring of Fire’s Farron Cousins explains.

One of the things I’ve noticed this year, that actually has absolutely nothing to do with Donald Trump, if you can believe it, is that Paul Ryan is either the dumbest or the smartest person in Washington DC. And you know what? I’m going to go ahead and side with the fact that Paul Ryan is absolutely the dumbest person in Washington DC. Here’s my most recent evidence to support my conclusion here.

You know what else hasn’t come a long way since 1986, Paul Ryan, and this is the why you’re the dumbest person in DC? Your talking points. You are literally trying to sell the country the exact same policies that were sold to us in 1986. In fact, they actually came to us in 1981, from Ronald Reagan in the form of trickle-down economics, because that is all that your tax plan is. It is not about helping small businesses navigate a complicated tax code. It’s about giving massive giveaways to the top 1%. That is all that your tax plan does.

Average working families in the United States will get an extra $40 a year from Paul Ryan’s tax code, tax reform, tax break, whatever you want to call it. 40 bucks a year. You make more than $3 million a year, you’re getting well over $100,000 back. That’s not even a proportional amount here folks, but that’s what this tax plan does. It gives everything to the people who already have everything, and gives nothing to the people who actually need something. Paul Ryan doesn’t care, Paul Ryan is trying to sell this country trickle-down economics every day, and it’s a policy that when enacted in the 1980s, sent us into a massive recession. It’s a policy that when enacted during the Bush administration in the early 2000s, sent us into a recession, and it is a policy that if enacted today, will, you guessed it, send us into a recession. Every time it’s been tried it sends us into recession.

So Paul Ryan wants to talk a big game about things that have been updated since 1986, well how about updating your policies? How about updating your party platform? How about updating your talking points? Because you pulled those straight out of the 1980s Ronald Reagan playbook, and they don’t work anymore, because the American public is not as stupid as you are. You might think that they are, but trust me, they are not. Nobody’s buying your stupid lies about trickle-down economics anymore, and more importantly, nobody is buying your lies about the fact that small businesses are going out of business because of the tax code.

I challenge anyone watching this video, to send me definitive proof of any business in this country … small business, that has ever gone out of business, due 100% to our tax code, 100% because of the tax code. Not because they weren’t making enough money, not because they were corrupt as hell, not because they couldn’t keep employees, but because of the tax code, that’s the only reason they went out of business. Somebody please, send me information on any small business that, that happened to, and maybe I’ll come out and apologize to Paul Ryan, but you’re not going to be able to do it, I know, I’ve looked.