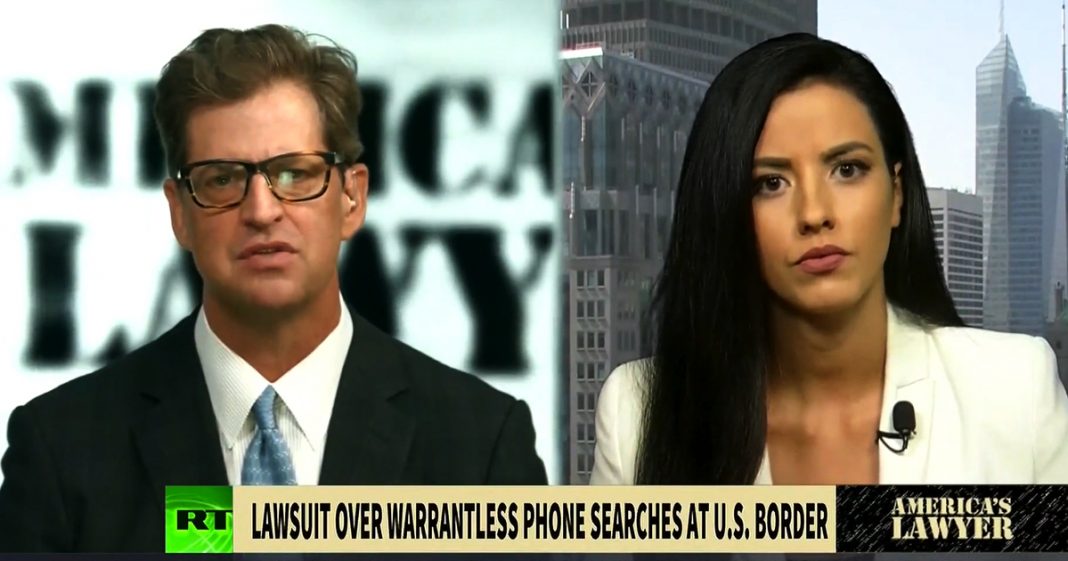 Via America’s Lawyer: Attorney Peter Mougey is joined by RT Correspondent Trinity Chavez, to explain how Homeland Security may face a lawsuit over warrantless border searches of U.S. citizens.

Peter Mougey: What does a NASA engineer, a military veteran, and a journalist, and a college student all have in common? They’ve all been forced to hand over their laptops and smartphones without a warrant, by Homeland Security officials when re-entering the United States. Now, ten of these citizens are filing a federal class action lawsuit, saying their constitutional rights were violated.

Joining me now to discuss this, in RT New York, correspondent Trinity Chavez. Trinity, thanks for coming. What does this lawsuit allege? What are the violations? What’s the background or the cornerstone of this lawsuit?

Trinity Chavez: The Electronic Frontier Foundation and the American Civil Liberties Union filed a lawsuit earlier this month, against the Department of Homeland Security for warrantless border searches. The lawsuit alleges that Homeland Security officers violated the plaintiffs fourth amendment rights when the agents searched, in some cases confiscated their devices without a warrant at all, like their phones and their laptops.

The two organizations will represent ten US residents, who they say are law-abiding US citizens who are Muslim or people of color. They were re-entering the United States from either business or personal travel, when they all had their computers and smartphones searched, when none of them were accused of doing anything wrong.

These plaintiffs are students, are journalists, one was even a military vet, and another one worked for NASA when this all happened. Some of these individuals had their phones held by border officers for months, even though they weren’t accused of a specific crime.

Under the US Constitution, the fourth amendment prohibits unreasonable searches and seizures, and requires law enforcement to have warrants. But courts however, have made exceptions for the searches at US ports of entry, like at the airport, and have ruled that the government can do warrantless border searches to enforce immigration and custom laws, to protect national security.

But since Trump has taken office and implemented his travel ban, concerns of racial profiling and stereotyping have really become more of an issue, along with violation of one’s human rights, and especially in today’s society, where we are living in the digital age, our phones and our computers have a vast amount of personal information on them.

We’re talking about pictures, videos, emails, and private text messages, even applications that store credit card information, health information, so the level of personal information is really unbelievable. One plaintiff, Akram Shibly, who had their phone searched, called the ordeal a gross violation of his human rights.

Peter Mougey: Let’s go back to the NASA engineer, his name was Sidd Bikkannavar. He works for NASA in jet propulsion laboratories, an employee. He was subject to one of these searches. What’s the full story and the background on the NASA employee’s case.

Trinity Chavez: This plaintiff is an Indian origin Muslim, who is a scientist for NASA. He designs technology for space telescopes. In this case, he was on his way back from vacation in Chile, in February. When he returned to the US, it was just days after the signing of the travel ban, when a customs and border protection agent in the Houston airport pressured him to unlock his phone by typing in his password, and forced to hand it over.

Bikkannavar is a natural-born citizen, and even had global entry, which is basically pre-approved clearance to get you through customs quicker and easier. Keep in mind, to join this program, you have to go through a thorough background check, and even an in-person interview. But regardless, he was escorted to an interview room and was forced to give up his phone.

The officer told him that they had to search his possessions to make sure that he wasn’t bringing anything dangerous into this country. The officials had asked him everything from where he worked, where he was coming from, and where he lives. This is all information that the officer should have already had, since the plaintiff was a part of the global entry program.

Bikkannavar had answered the questions and explained that he worked for NASA, and that his phone was issued actually by NASA, it wasn’t his own personal cellphone, so it may contain sensitive information that wasn’t meant to be shared. But none of that mattered, he was still searched along with his device.

At one point, he even asked the officer why he was chosen to be searched and questioned, but the officer didn’t tell him, he just insisted that he had the legal authority to do this. The border officer had his phone for a half an hour, before he finally gave it back to him, saying that he had been searching his phone using algorithms. Bikkannavar had not known what information that the officials might have taken from his device, so that is still unknown.

Peter Mougey: Trinity, to me, from an outsider looking in, this certainly does look like these are people with the wrong skin color, and the wrong names, and are getting just picked out of line based on profile issues. Is there a legitimate basis for US border officers searching their phones and their persons, and doing these extensive background checks, or is this just look like racial profiling?

Trinity Chavez: It gets complicated because the government is initially, seemingly so, trying to protect the US from terrorism and things of that nature. But this isn’t a new protocol, this is something that they have been really kind of going for, for the last few years, but this has become more of an issue recently.

Officials say that the electronics searches began late in the Bush administration, but CBP officers have cracked down on these inspections this year, since Trump has implemented the travel ban. People can be searched based on a number of different reasons.

According to the guidelines though, on the CBP website, you could be subjected to inspections because your travel documents are incomplete, or you don’t have the proper documents or visa. You may also have previously violated one of the laws that CBP enforces, or even if you have a name that matches a person of interest in their database. There are several different reasons that may apply to a person.

One thing is how they even know that these are people of interest, or if their documents are incorrect. How do they know that without initiating the conversation with these travelers?

As far as the people’s phones go, travelers are not legally required to unlock their phones or devices, but border agents are known to detain individuals for long periods of time when they don’t cooperate, so that’s why people feel pressured to give them the passwords to their phones. Just like in Bikkannavar’s case, where he was not allowed to leave until he gave the agents the passcode to unlock his phone.

Peter Mougey: So you hold him hostage until you give the password, I mean we’re not talking about looking at travel dockets, you’re looking in phones, they’re looking at laptops. So in addition to not having any warrant to search through someone’s private information, what hazards are posed to citizens if their emails, text messages, as you mentioned, photos, they can all be searched by authorities like they have been?

Trinity Chavez: Yeah, absolutely. To really pinpoint the exact racial make-up of the individuals who are being targeted, and who are getting inspected, gets a little tricky. That information hasn’t been released by the CBP, but what I can tell you is that the ACLU reported that the amount of searches at border patrol have spiked recently.

According to the data on the CBP site, the number of searches grew from 8,503 in 2015 to 19,033 in 2016. That’s an increase of almost 125%, and officers have already carried out nearly 15,000 searches just this year, between January and June, which puts the CBP on track to conduct about 30,000 searches for the year. But the government has said that those searches happen to fewer than one hundredth of 1% of international travelers, and that they are authorized by some laws that allow border agents to look through suitcases without a judge’s approval, and those are the same laws they are using to search peoples’ devices.

Peter Mougey: Trinity, thank you for joining us today.