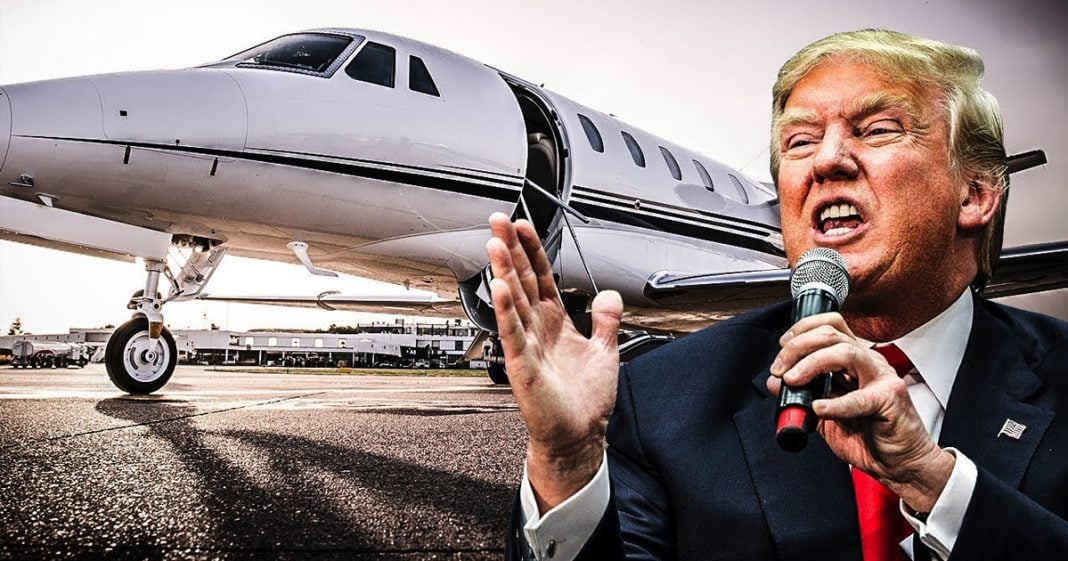 The Trump Administration announced that they would be enforcing a rule that would prohibit Puerto Ricans from receiving any kind of discounts or financial aid to evacuate their devastated homeland. Meanwhile, Trump’s cabinet officials are racing around the country in private jets at the expense of US taxpayers. Something is wrong with this picture, and Ring of Fire’s Farron Cousins discusses this issue.

I’m sure most people are aware of the fact that in the last few days a massive scandal has erupted from the Trump administration where it turns out that these millionaire cabinet appointees from Donald Trump are flying around the country on private jets at the expense of US tax payers. Tom Price alone I believe has racked up more than half a million dollars in private jet cost since becoming Secretary of Health and Human Services. Ryan Zinke is also implicated in this, Scott Pruitt, I believe Elaine Chao is also in there.

So we have a lot of people within the Trump administration, Betsy DeVos as well, who are already super wealthy, they can pay for these planes themselves, and yet they’re charging American tax payers for it, which technically they’re not allowed to do. Tax payers are only on the hook for the cost of commercial flights, and if these people want to take a private jet, they have to pay the difference and so far they have not. Price has said he’s going to pay back $52,000 of the $500,000 plus dollars that he’s spent on private jets. Still not good enough.

Why am I bringing that up? Because right now the federal government is charging citizens of Porto Rico full price to buy a plane ticket to evacuate their devastated homeland. Now the Justice Department is giving loans to people so that they can buy these plane tickets, which is not uncommon in disaster areas. However, they’re requiring that these people pay full price for these tickets, even though they have absolute authority to lower the prices or provide free plane rides for people to escape the country so that they can go somewhere that has running water, and drinking water, and electricity, and air conditioning, and clean clothes and food. And we’re charging them full price.

You know how we guarantee that we get full price? Because the Justice Department holds their passports and other forms of identification until that loan is paid off, which means if you evacuate Porto Rico you have to turn in your IDs and your passport to get the loan to fly out. Then if you want to go back, you have to pay that loan off first.

This is one of the more disgusting things that we have seen in terms of the response to the disaster in Porto Rico, which according to Donald Trump on Twitter that was going phenomenal, everything down there is absolutely fantastic, we’re doing a great job, the governor of Porto Rico calls me, he says every time we talk it’s great. No, it’s really not. Things are horrible down there and they are not getting better. Why don’t you try talking to an average citizen in Porto Rico and they’ll tell you how horrible things are, and your Justice Department is making it worse.

You know what your Justice Department needs to do? They need to be launching an investigation into these millionaires who are screwing over American tax payers for their private jet flights. I don’t know about you, but I would much rather be on the hook to pay for plane tickets to get people out of Porto Rico, than for millionaires like Tom Price and Betsy DeVos to be charging me for a private jet so that they can do some government business and occasionally a little bit of private business on their own.

I don’t give a damn if those people have to walk across the country. What we should care about right now are the people who do not have food, they do not have water, they do not have electricity, or medicine. They’re the ones that need help, not these wimpy little millionaires that you’ve appointed to your cabinet Mr. Trump.