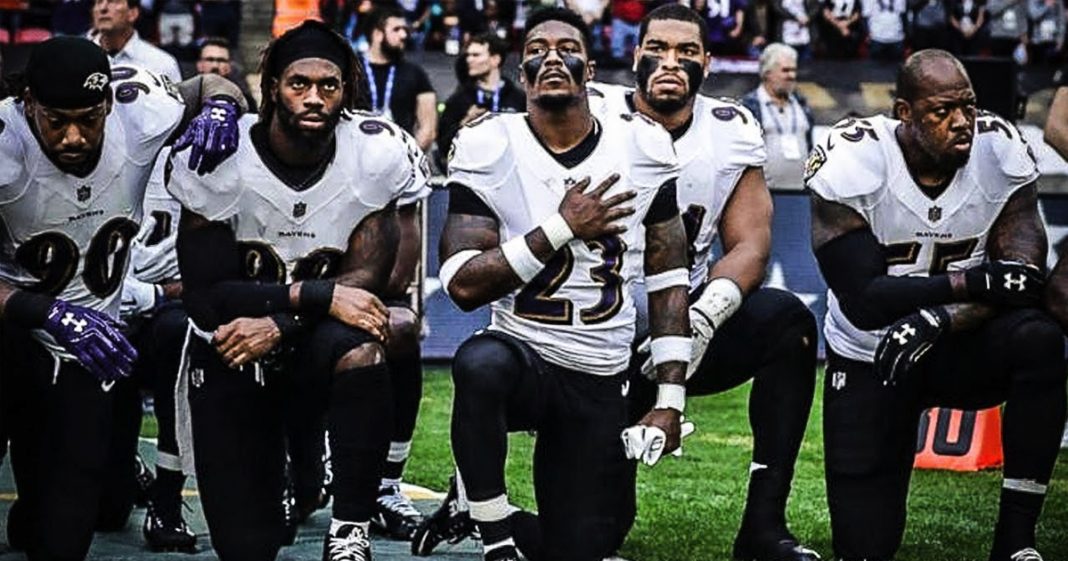 Conservatives across the country are still losing their minds over the fact that NFL players and a few stars who sung the National Anthem at NFL games this week decided to kneel or stay in the locker room to protest police brutality. So in typical Republican fashion, these unhinged right wingers are now lobbing death threats at these people. Ring of Fire’s Farron Cousins explains.

Proving once again that the Republican party is certainly not the party of tolerance. NFL players and even some of the people who came and sang National Anthem at these recent games where players either locked arms or kneeled or stayed in the locker rooms they’re all receiving death threats from Conservatives across the country. Now, here’s the thing about all of these protests that Republicans still don’t seem to be able to grasp. This isn’t about disrespecting the flag. This is about police brutality and the murder of black citizens in the United States at the hands of police officers. People who may or may not have committed crimes. There’s certainly evidence that some of these people definitely did not. Majority of them unarmed, not fleeing in many cases. They were just killed. Why? Because they were black. That is the point of these protests and that is what they are drawing attention to.

But for white Conservatives across this country that’s not good enough. They’ve turned this into some kind of phony debate about disrespecting the flag or our soldiers and so now they’re issuing death threats to the very people who are protesting the unjust death of black people all over this country. Do they not see the irony in that? Or do they just not care? Or more likely, they just want to see more dead black people in the United States because that is what this is about. They’re not wanting these people dead, they’re not calling for their murder because they’re protesting, they’re doing it because of the color of their skin. Again, that is what all of this boils down to. 84% of the American public approves of these demonstrations that have been going on in the NFL for the last week. 84%. I mean that’s a higher percentage than approve of Medicare for all, or tuition-free college, or any person in any political party that’s elected in Washington, D.C. 84% approve of these NFL players.

The rest of them, some of them I should say, want to kill them. That is what they’ve said, that is what they’ve made clear, that is what they’ve posted on social media. That is what they’ve said during interviews, and that is what they want to do. We have to do better as a country at this point. This is a massively important issue that these NFL players and these anthem singers are trying to raise awareness for. These people out there that want to kill the people protesting unjust death are just as bad as the police officers out there committing these murders. These people who’ve issued these threats need to be in prison. They need to be under psychological surveillance for the rest of their lives because something is mentally wrong with you if your response to a protesting American exercising their free speech rights is to call for them to be killed.