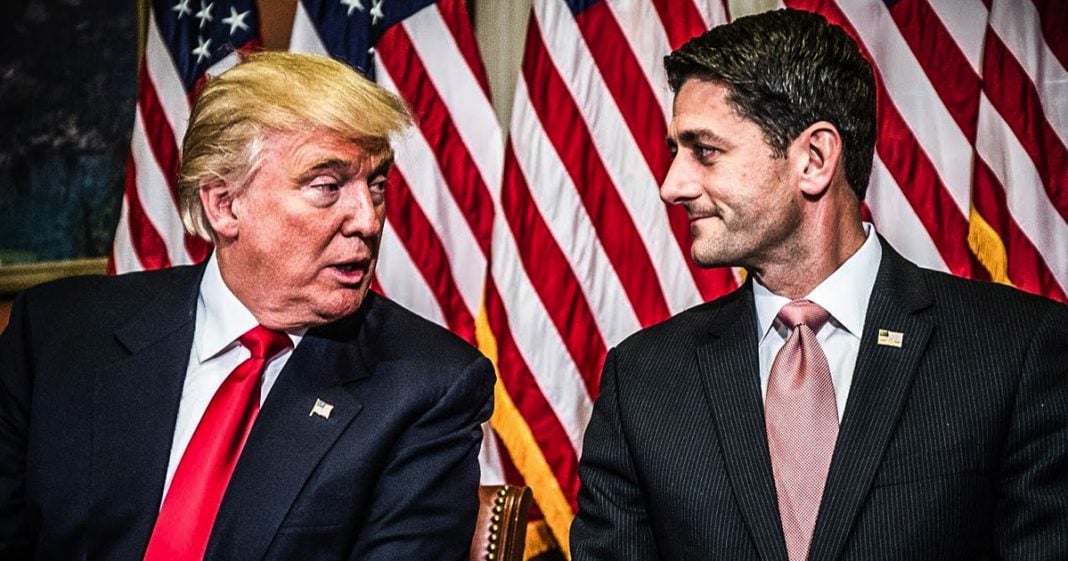 The Republicans have finally finished their tax reform plan, and as expected, the entire plan is nothing but a giveaway to millionaires and billionaires. The plan would reduce Trump’s family’s own taxes by 14%, cut corporate taxes by roughly the same amount, and leave next to nothing for struggling American citizens. Ring of Fire’s Farron Cousins explains this.

On Wednesday afternoon, we finally got a clear picture of what exactly is in this tax reform plan that Donald Trump and Republicans in congress have been working on for so long. This is something that Paul Ryan himself has personally tweeted about, pretty much every thirty minutes for the last month, because it’s the only thing he can think of.

As the details yesterday were revealed, it was pretty much exactly what we expected it would be, which is a $5 trillion giveaway to the top 1% and to corporations. Now, five trillion is the total cost of all of the cuts within this new tax reform package that Republicans have put forward. Not necessarily all of the five trillion is going to the top 1%, but almost all of it is.

The inheritance tax, absolutely gone. So when Donald Trump finally kicks the bucket, his kids don’t have to worry about paying taxes on any of the money that they get from him, nor do any of the other children of wealthy people in this country. These inheritance babies get their hands on it tax-free, to with what they please.

The most interesting part though, because we expected the top 1% tax breaks, the corporate tax break, it’s a huge giveaway to them. What’s really interesting, and something that hasn’t gotten a whole hell of a lot of attention for some reason, is the fact that Donald Trump claimed this tax package was gonna be relief for middle-class workers and for the underclass. It actually literally raises their taxes.

The bottom tax rate is going up from 10% to 12%. It’s only a two percentage point increase, but when you consider the fact that corporations are getting their taxes cut by 15%, wealthy families like the Trumps, and the Waltons, and the Cokes are getting their taxes cut by 14%, we’re gonna pay for that, according to this tax reform package, by increasing taxes on the poor. The people who cannot afford to give any more money are having to now more, so that the federal government can hand it back over to the wealthy elite.

This is by far the most disgusting, and dishonest, and hurtful, and economically harmful piece of legislation that the Republican party of the United States has ever put forward, ever.

In addition to raising taxes on the bottom income earners, they’re eliminating the personal exemption for taxes, which disproportionately is going the affect the middle-class, meaning that a standard deduction that they usually get at $4,000 is now going away. They don’t get that exemption anymore. Their taxes are going up to pay for the tax breaks to corporations, and millionaires, and billionaires.

Can anyone, anyone out there watching this, explain to me how this is fair? How the people who are working their asses off day in and day out, still unable to get by, feed their family, provide medication for their family, can’t afford health insurance, we’re asking them to pay more, so that we can give more money to the people cruising around on private jets, on their yachts, running massive corporations, price gouging American consumers, bleeding their workers dry, not giving them raises, fighting against increasing the minimum wage, buying and selling congressmen.

Those are the people we’re giving more money to with this tax reform package. That is what is in this piece of legislation, and again, exactly what we expected it to be. But I guess some part of us, some little, tiny part of us maybe thought, maybe there would be something in there that would give the middle-class and the bottom earners a little bot of hope.

Instead, we’re pulling more money out of their pockets, to put more money back in the pockets of people like Donald Trump, Charles and David Coke, and the entire Walton family, because those are the only human beings on this planet that the Republican party actually cares about.