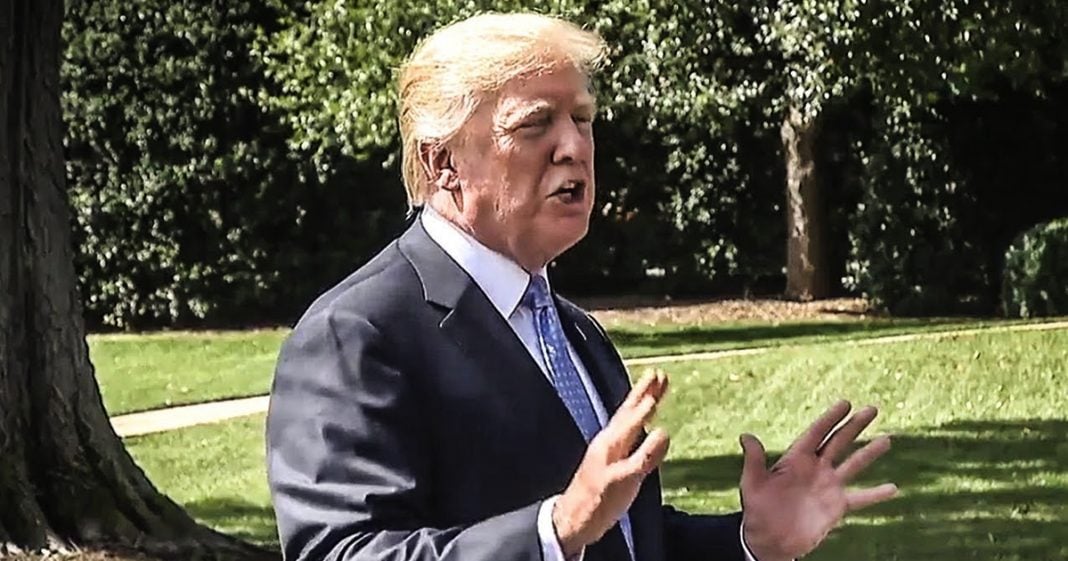 Donald Trump has never been the kind of guy to take the blame for his own failures, and the inability of Republicans to pass a “repeal and replace” bill is no exception. While talking to reporters on Wednesday, Trump repeatedly claimed that the reason the healthcare bill failed was because one Republican senator was in the hospital and couldn’t vote. The only problem is that no Republican senators have been in the hospital this week. Ring of Fire’s Farron Cousins discusses this.

Donald Trump has a very interesting explanation as to why the Republican healthcare bill has failed yet again in the United States senate. Take a look. This is Donald Trump yesterday on the White House lawn explaining to reporters why this bill failed.

Reporter: You talking about Cochran?

Donald Trump: He can’t vote because he’s in the hospital. We have two other votes that are coming and we will have that. But the problem is we can’t have them by Friday because the reconciliation ends on Friday.

Reporter: So, what do you do?

Donald Trump: So, we’ll have to do it in January or February. But I feel we have the votes. I’m almost certain we have the votes. But with one man in the hospital, we cannot display that we have them. But some people want to go through a process just to make themselves feel better. That’s okay.

There are several interesting things to point out about this. First of all, you could tell from Donald Trump’s reaction when the reporter asked him if he’s talking about Thad Cochran that he has no idea who he’s actually talking about. Somebody clearly told him, “Hey, just say somebody was in the hospital and we didn’t have the votes.” So, he repeated it. In the clip, he repeats it and repeats it and repeats it because that’s all he knows to say.

But more importantly, this bill was deemed dead before Thad Cochran even went to the hospital and he didn’t even stay in the hospital. It was an outpatient type thing. He had an illness, he went to the hospital to get it checked out or do whatever testS he needed to do and he left. He did not stay overnight. He even tweeted out later that, “Hey, I’m not in the hospital.” But again, the more important thing is the fact that the bill was dead because they didn’t have the votes before any of Cochran’s health issues even came into it.

Cochran did not play a role in helping to kill the healthcare bill. It was people like Murkowski and Collins and even McCain and Rand Paul. Those people stood up and said, “Absolutely not. This is still a horrible piece of legislation. Not going to let it fly.” But Donald Trump can’t take responsibility for that. He doesn’t want to take responsibility for it because he doesn’t want people to think that he was once again unable as the leader of the Republicans in D.C. to bring them all together to support this horrible piece of legislation.

He is incompetent and he doesn’t want people to know it. So, he blames it on all sorts of outside factors. There was a guy in the hospital. It was raining that day and some of the senators don’t like to drive in the rain. There was a really big spider on the door of the Senate and they wouldn’t go inside. Whatever stupid thing he comes up with is only to make himself not look bad. It wouldn’t matter the real reason to Donald Trump because in his mind, it’s everyone else’s fault.

But here’s the thing. When you sit as the President of the United States, whatever your party is, you become the de facto leader. It is your job as President of the United States to speak with members of both parties and get them to come together on legislation. You failed to do it. It’s not Cochran’s fault because he got sick. It’s not Murkowski or Collins’ or McCain’s or Paul’s fault because they don’t want to support your bad legislation. It’s your fault for pushing a bill that would have stripped 32 million people of their health insurance coverage.

Keep in mind, folks. This fight’s not over. Trump himself admitted it there. January, February, possibly even sooner, we’re going to have to go through this whole ordeal once again. But as long as people continue to make those phone calls and send those emails and even fax your complaints to these senators, we can continue to fight this thing off until we get enough Democrats in D.C. to finally get Republicans off the healthcare issue and to get Donald Trump completely out of office.