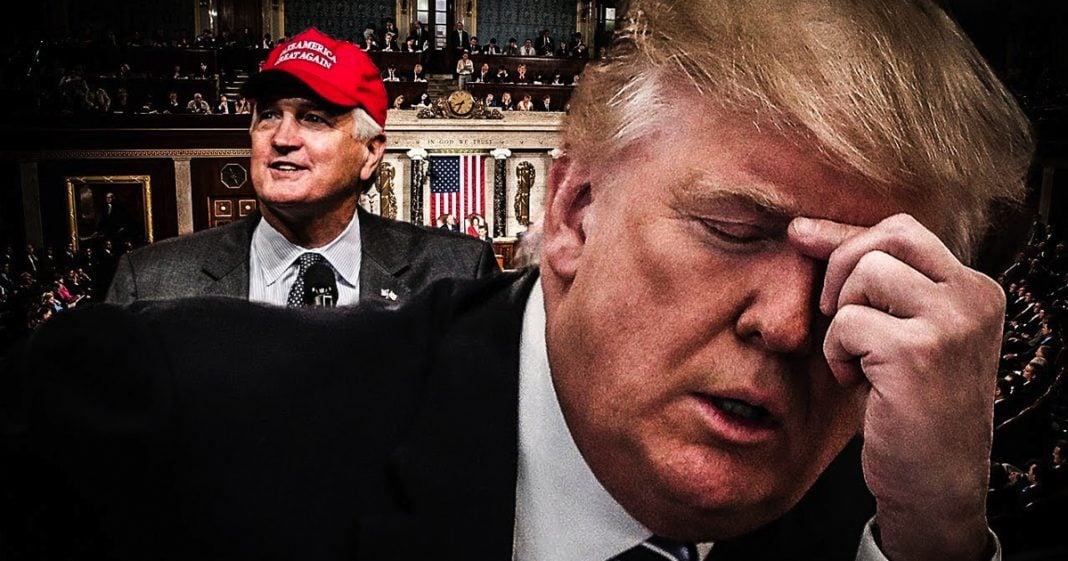 The Alabama Republican Senate race runoff happened on Tuesday, and “Big” Luther Strange was defeated by Roy Moore. While both men are equally horrible, Donald Trump put all of his eggs in the Luther Strange basket, tweeting his support nonstop. But immediately after the results came in, those tweets began disappearing from Donald Trump’s Twitter feed, and Ring of Fire’s Farron Cousins explains why this was such a huge hit to Trump’s ego.

On Tuesday of this week Alabama held their primary runoff between Republicans Roy Moore and Luther Strange. Both men were vying for the Senate seat that was vacated by Jeff Sessions when he took over as attorney general. Donald Trump was very involved in this primary runoff, and he put all of his eggs into the Luther Strange basket. As many recall, that is the reason he was in Alabama Friday evening where he gave the speech about the NFL sons of bitches.

All throughout the weekend, all throughout Tuesday during the voting, Donald Trump was tweeting out his support for Luther Strange, claiming that Luther Strange was the only person who could win that senate seat to help make America great again. Well, as it turns out, voters of Alabama disagreed, and they voted for Roy Moore to be the Republican candidate to replace Jeff Sessions, and Luther Strange ended up losing that primary runoff in spite of his massive support from both Donald Trump and Mike Pence.

Now, before we get into the details here, keep this in mind. Roy Moore is a horrible bigot. In terms of policy, he’s no different than Luther Strange or any other Republican in the Senate. He’s going to be horrible. He would love to impose some sort of Christian rule over America, and he’s overall pretty disgusting person, not the kind that we want in the Senate. His Democratic opponent, Doug Jones on the other hand, is a guy who prosecuted the KKK in the 1960s, and I think that’s more of the caliber of person that we need helping to run this country.

Nonetheless, Donald Trump again had tweeted out enormous support for Luther Strange, but immediately after those voting results came in, those tweets began to disappear. Donald Trump was so embarrassed over the fact that he backed a losing candidate in the state of Alabama that he went through, deleted his Luther Strange support tweets, and instead tweeted out support for Roy Moore, saying, “Congratulations, you’re going to help us make America great again.” Mike Pence tweeted out something similar congratulating Moore, acting as if the two hadn’t been actively campaigning for Luther Strange.

Now, this is not the first Trump backed candidate this year to lose a special election or a primary runoff, and it shows that Donald Trump’s alleged influence over the voters is not as strong as it may seem. However, there is a caveat here. Even though Trump backed Luther Strange and Luther Strange ran all kinds of ads attacking Roy Moore for not supporting Donald Trump, voters in Alabama who voted for Roy Moore, according to exit poles, actually do still support Donald Trump, and they think that Roy Moore will work very well with Donald Trump.

This wasn’t exactly the rebuke of the Trump administration that some analysts had been calling it. This was just people kind of confused, knowing who Roy Moore is, and wanting to send him to the Senate to work with Donald Trump. This is not a rebuke of Trump’s policies or politics, and it’s not a better candidate than Luther Strange by any stretch of the imagination. Again, the only candidate that’s worth a damn running in this case is Doug Jones.

However, the fact that Donald Trump once again backs a losing candidate and then feels the need to go back and delete those tweets as if the American public is somehow going to forget about them, is laughable. Groups like ProPublica, Mother Jones, and many other outlets out there have already cataloged those pro-Luther Strange tweets, so they’re going to live on. They’re not going to go away just because Donald Trump deleted them. They’re going to be there whenever we want to go back and look at the time when Donald Trump backed such a significant loser in the Alabama primary runoff.