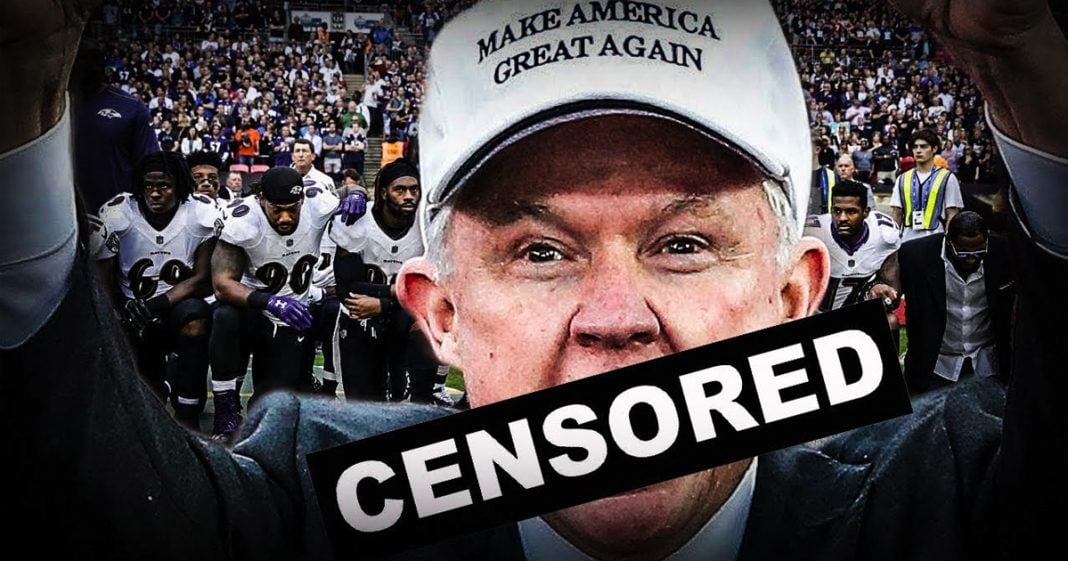 Jeff Sessions needs to find a dictionary and look up the definition of the word “irony”, because banning protests at a 1st Amendment speech would be a perfect example of that word. Yet that’s exactly what Jeff Sessions did this week and he didn’t even once think that there was a problem with this. Ring of Fire’s Farron Cousins explains why these conservative snowflakes are so desperate to find their “safe spaces.”

On Tuesday of this week, Jeff Sessions, Attorney General of the United States, spoke at the Georgetown University Law Center in Washington, D.C. He was giving a speech about the importance of the First Amendment and the freedoms that the First Amendments grants U.S. citizens. Before we get into what actually happened during the speech, let’s take time to appreciate the irony of the fact that his boss, Donald Trump, is currently attacking NFL and NBA players who are exercising their First Amendment freedoms. Probably not the best time for Jeff Sessions to go out there and talk about the freedoms of the First Amendments when his boss is out there attacking people for using those exact freedoms.

But, Jeff Sessions is clearly immune to that kind of irony. Because during his speech … Or, I guess before his speech even began, protesters were banned from attending a speech about the First Amendment from the Attorney General. Photographs of the speech itself showed many, many empty seats through the auditorium because a lot of people who were not necessarily Jeff Sessions’s fans, had been dis-invited from attending the speech in addition to the protesters.

Here we have the highest attorney in this country, giving a speech about basically freedom of speech, and not allowing people who disagree with him to attend or even show up. I mean, I know conservatives like to call liberals “snowflakes who love their safe spaces”, but isn’t that exactly what Jeff Sessions just proved to us that he is? I mean, you can’t get much more of a little delicate snowflake than not allowing people to attend a speech on free speech because they disagree with you. In essence, Jeff Sessions turned that whole auditorium into his personal little safe space because he’s too much of a coward to have to answer questions from someone who disagrees with him or from someone who knows more about the law than Jeff Sessions does.

Jeff Sessions is an absolute disgrace, a worthless human being, serving as our Attorney General. He has proven time and time again that he is a racist bigot. Now he’s proven that he’s so much of a coward that he can’t even be in the same room as someone who disagrees with him.

I think we all know now that conservatives are the real snowflakes out there and they’re trying to turn their little rallies into their own personal safe spaces so that they don’t ever have to be faced with a question or look another human being in the eye that happens to disagree with them on any issue.