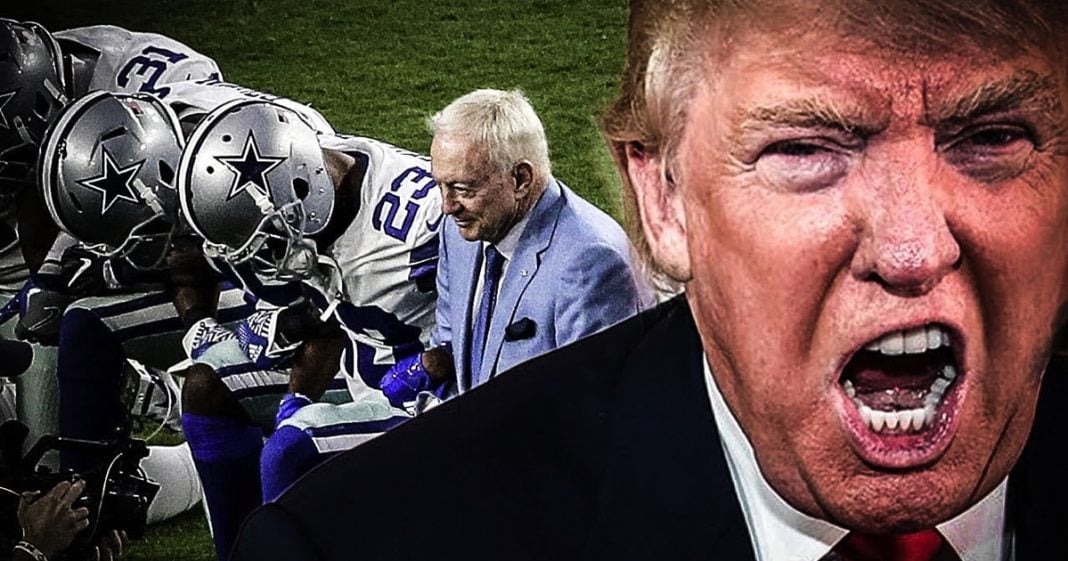 On Tuesday morning, obsessive Donald was STILL Tweeting about the NFL, making all sorts of wild claims that are completely untrue. The man has a serious problem and he doesn’t understand that he’s just digging himself deeper and deeper into a hole that he can’t possibly climb out of. Ring of Fire’s Farron Cousins discusses this.

For the fifth day in a row, Donald Trump has decided that his best use of his Office of the President is to continuously attack the NFL and NFL players for kneeling during the national anthem to help raise awareness for the police brutality suffered by Black people in the United States and other forms of racial inequality. Five days in a row, that has been the main thing that Donald Trump has talked about. Forget the fact that Puerto Rico, a US territory, is absolutely dying right now. Forget the fact that we’ve got a healthcare disaster that Republicans are trying to make worse. Forget the fact that the West is still on fire and the media is not even talking about it. Let’s go after the NFL. That’s Donald Trump’s mantra and apparently this is the kind of guy who doesn’t understand that when you’re already in the hole, that’s the best time to stop digging, but Donald Trump is too proud to do that so he continues to double and triple down on his horrible statements about the NFL and the players who decided to make a political statement with their platform.

Tuesday morning, here are just a few of the things Donald Trump tweeted out about the NFL. First one, “Ratings for NFL football are way down except for before a game starts when people tune in to see whether or not our country will be disrespected.” That’s not true. Actually overall, the NFL ratings are up. They were the highest they’ve been in years on Sunday and possibly due to part I guess people wanting to see what they were going to do for the national anthem. But, overall, ratings for the NFL are up so Donald Trump’s first claim, absolute lie.

Second one, “The booing at the NFL football game last night when the entire Dallas team dropped to its knees was the loudest I have ever heard. Great anger.” I don’t know exactly what goes on in Donald Trump’s head. I’m assuming not very much. But, never in my life did I ever think I would see a sitting president praise people’s anger at other people for exercising their first amendment right. They have a right to take a knee. There is no law saying that you have to put your hand over your heart during the national anthem or the Pledge of Allegiance. That’s not how the United States works. That’s how things in dictatorships work. You’re forced to be loyal but that’s not how it works in the United States. For you to say, “Great anger,” is absolutely disgusting and appalling.

Here’s another one. “The NFL has all sorts of rules and regulations. The only way out for them is to set a rule that you can’t kneel during our national anthem.” Speaking of rules, here’s something interesting that I learned just yesterday. Up until 2009, it wasn’t even required for players to stand for the national anthem. It wasn’t expected of them and they didn’t. This is a relatively new rule or tradition that’s been going on for about eight years. Furthermore, the US military pays the NFL and other sports leagues and even Hollywood studios exorbitant amounts of money to do their promilitary stuff. That helps recruiting for the military. They do it at sports games. They do it in Hollywood movies. They do it on TV shows and the US military is paying for them to do that. Furthermore, these flag codes that you like to talk about, disrespecting the flag, did you know that laying the flag flat like they do before every single football game is against the US flag code? Kneeling isn’t but laying it flat like that is.

That’s actually disrespecting the flag. But, more importantly, you can’t just fire these people for not standing during the national anthem. First of all, you would be looking at a massive lawsuit for violating the constitutional rights of these players which would then force the NFL to pay out millions, if not, more in compensation for firing these people. Second of all, their own contracts, you idiot. If you fire them, you still have to pay out the remainder of that contract so they’re going to lose a ton of money on this but you wouldn’t understand because you are a horrible businessman who, let’s not forget, bankrupted an entire football league at one point. That is a talking point I have not heard brought up in any of this when we’ve been talking about the NFL. Donald Trump once bankrupted an entire football league. I believe it was the AFL and now they’re gone.

This whole protest thing has been hijacked by Donald Trump. He’s making it about patriotism and disrespecting the flag. It is about racial inequality in the United States and the horrendous treatment of Black people at the hands of police officers throughout this country. That’s what this is about and we cannot let him hijack this message and he’s attempting to and that’s why he’s still harping on it because he knows he’s not winning. Let him keep talking about it. Let him keep going because I think most of this country at this point finally understands what this protest that was started last year by Colin Kaepernick is actually about.