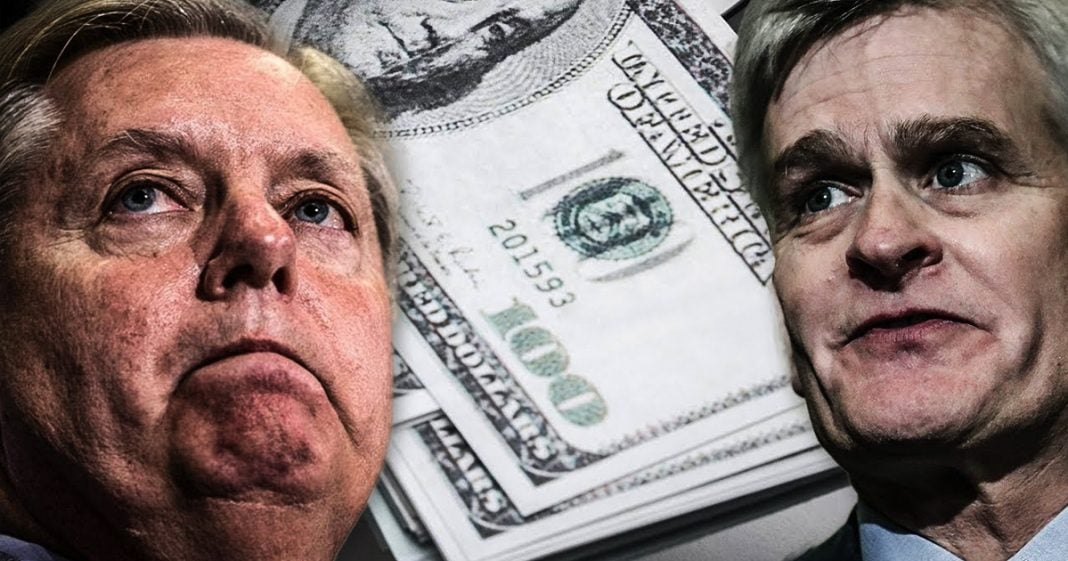 Republican Senators Lindsey Graham and Bill Cassidy – the duo behind one of the worst healthcare plans in modern history – took on Democratic Senators Amy Klobuchar and Bernie Sanders in a debate about healthcare on CNN, and both Republicans resorted to false claims, distortions, and outright falsehoods in order to sell their horrible legislation. But Amy and Bernie saw through the lies and made cogent, intelligent points. Ring of Fire’s Farron Cousins recaps the CNN debate.

On Monday night, CNN hosted a healthcare debate with senators Lindsey Graham and Bill Cassidy on the Republican side and keep in mind, they’re the two people who came up with the disastrous healthcare bill that’s currently in the senate, and on the Democratic side, we had senators Amy Klobuchar and Bernie Sanders. Now, throughout this debate, in between myself shouting at the TV and then getting yelled at by my wife about that. Bernie Sanders and Amy Klobuchar made a lot of great points. They talked about the need to address rising premiums. They talked about the need to address the rising cost of pharmaceuticals and Bernie Sanders continued to talk about his Medicare for all legislation and why the United States needs to push towards that kind of system similar to what every other industrialized country in the planet is doing.

Meanwhile, on the Republican side, senators Graham and Cassidy offered absolutely nothing to help, one, clarify what’s actually in their piece of legislation or two insure that all Americans retain their health insurance coverage even if they have preexisting conditions. Now, they did tell us that, “Look, if you have a preexisting condition, you’re still absolutely going to be able to buy health insurance.” Well guess what folks, that’s still been the rule for as long as I can remember. Yeah, you can buy it but it’s going to be so unaffordable that you’re not going to be able to buy it. Access does not equal coverage and that’s something that Republicans don’t seem to quite understand. Everybody in this country, yeah, we have access to health insurance. Whether or not we can pay for it or afford it is a completely different story and that’s what the Republicans don’t get and that is why they’ve been so successful at telling people that we need to destroy the affordable care act.

Graham and Cassidy both, mostly Graham however, continued to harp on the fact that Obamacare is failing. That’s why we’re here tonight, Graham kept saying, because it’s failing. No, you’re here tonight because you put forth a horrible piece of legislation that according to the CBO score that came out yesterday is going to kick millions of people off of their health insurance. That’s why you were there. The reason people say Obamacare is failing because that’s been the Republican talking points since the first day that it was enacted. Remember when you started talking about all the problems they had with their website on opening day and you said this thing is a complete disaster, the entire piece of legislation is crap? You’ve been doing it since day one but that doesn’t necessarily make it true because by every single measure, by every single report that’s looked at it, it’s actually exceeding expectations.

It’s not in danger of collapsing. It’s not sending health insurance companies into the death spiral. It’s actually working. Is it perfect? No. Not even close to it. There are many things we can improve upon but the Republicans aren’t addressing those issues. Bernie Sanders and Amy Klobuchar did. Those issues again are rising premiums which contrary to what Republicans tell us is the sole fault of the insurance companies. They like to blame Obamacare for these rising premiums. Well, guess what folks, I don’t know how many times I have to say it before it actually sinks in, but the federal government can’t raise your insurance premiums from a private company. That’s impossible.

You want to get pissed off about higher premiums? Blame Blue Cross. Blame ETNA. Blame all of the other insurance companies because they’re the ones who do it and they’re making a killing by doing it. They’re not hurting for money. Their CEOs are pulling in over $20 million a year in compensation. I think they’re going to be okay. They’re raising premiums out of greed, not because the risk pool is getting larger. Not because they’re having to pay out more claims but because they want more money. That is the bottom line. That is a fact that Republicans like Cassidy and Graham will not address but that is something that Bernie Sanders and Amy Klobuchar absolutely hinted at and Bernie flat out said it.

The bottom line is this. Graham and Cassidy offered absolutely nothing of substance during that debate. They lied their way through that entire debate and at times even got applause from the crowd which is a horrible statement on the state of the United States right now. We don’t need people applauding when they’re being flat out lied to by people like Graham and Cassidy and every other politician out there. We need people to hold them accountable. We need people intelligent enough to see through the bullshit that’s getting fed to them by these politicians. But unfortunately, we don’t have that. That is one of the main reasons why we even had to have this silly debate on CNN.