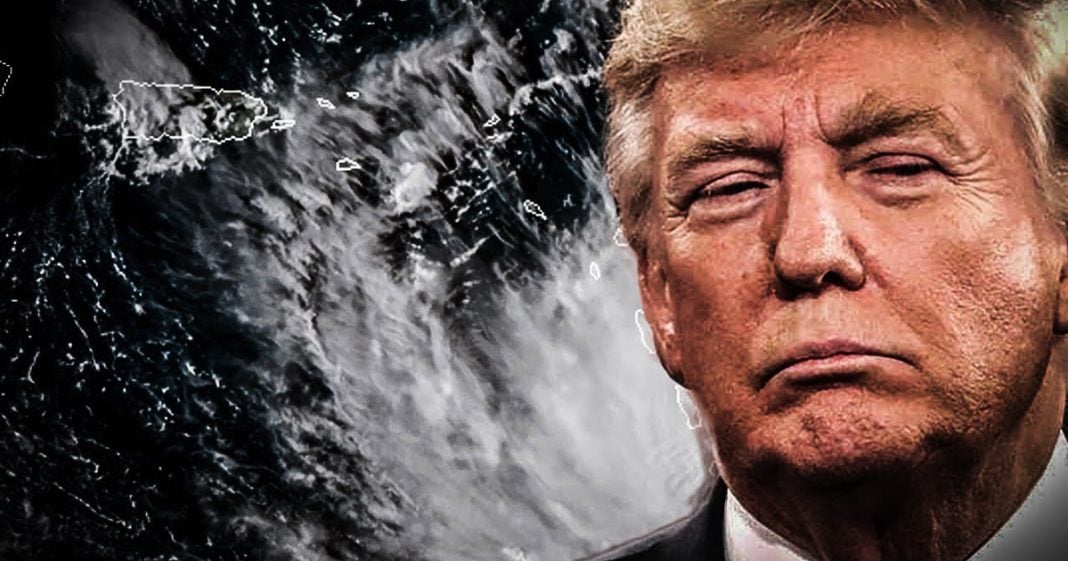 The island of Puerto Rico (a U.S. territory) has been begging the mainland to send aid after they were smacked by back-to-back Category 5 hurricanes. Instead, Donald Trump ignored their plight for several days before Tweeting out insults aimed at the island for being massively in debt and not being able to make their infrastructure hurricane-proof. People are dying, and all Trump can do is insult them. Ring of Fire’s Farron Cousins discusses this.

To give you a clear picture of the situation right now happening in Puerto Rico, which is a United States Territory. The people on that island are United States citizens.

According to the Governor of Puerto Rico, only 40% of the country has drinkable water … 60% of people in the country, in the territory do not have water that they can drink … 3.4 million people are without any form of electricity. No air conditioning, no refrigeration, no water heaters … Nothing.

No medical devices that require electricity are able to function.

Donald Trump spent the entire weekend tweeting about the NFL as Puerto Rico was literally dying. They got struck by two Category 5 hurricanes in the span of about two weeks. Donald Trump didn’t do a damn thing. He finally acknowledged the plight of the island late Monday night in between tweets about the Dallas Cowboys.

But rather than offer aid, he had first said: Oh, it’s horrible what’s happening there. And then he did the typical Donald Trump thing. He started to attack the island and shamed them because they have massive amounts of debt that they still need to pay off. They couldn’t fix their infrastructure. What a bunch of idiots!

You know, that’s why things ae so bad. Maybe if you would have fixed your roads and bridges, you wouldn’t be in this situation. That’s not exactly what he said, I’m implying that.

Nonetheless, Donald Trump took the time to attack the island for their “horrible infrastructure” and their massive debts rather than offer any serious aid. For days now, the Governor of Puerto Rico has been petitioning the United States to send aid. We need rescue workers, relief workers, National Guard. Whatever you have, we need it. We need water, we need supplies. We need medical supplies. Please send those as we are a part of your country.

And those supplies have not been sent. Donald Trump has not done it. Rather than sending aid, he is sending insults. Rather than helping American citizens, he is wondering why in the hell they aren’t paying their debts. Keep in mind, that’s coming from a guy who routinely doesn’t pay his debts, and has declared bankruptcy at least five times throughout his life.

Nonetheless, the situation on the island is dire. And how do we know that? Well, we know it because here in the State of Florida, immediately following Hurricane Irma, which first went through Puerto Rico, so far 11 residents at a single nursing home in this state died. Why? Not because a tree fell on them. Not because they were being horribly abused. But because they had no air conditioning and no water.

Now that may seem a bit like a luxury, air conditioning, to many people. But when you live in these hot and humid environments, like Florida, like Puerto Rico, a lack of air conditioning for infants, toddlers and the elderly can be deadly. It can cause instant dehydration that can lead to death.

And, when you add to the fact that you don’t have water, you have no way to cool your body down, and you die!

People in Puerto Rico are going to die. Some have already died. And the best thing Donald Trump can do is tweet out insults at them, and then go right back to insulting the NFL.

As a country, we deserve a better leader than Donald Trump. His behavior in this particular instance is far worse than anything we saw at a George W. Bush and Hurricane Katrina.

This is his heck-of-a-job brownie moment. And he’s doing worse than George W. Bush.