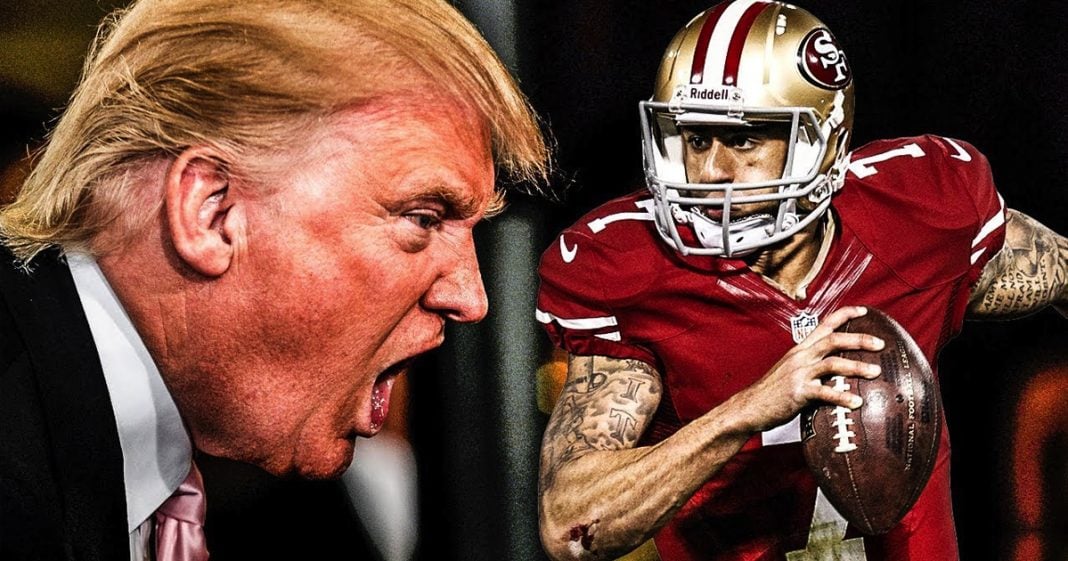 Donald Trump thought it would be a wise move at an Alabama rally on Friday evening to call pro athletes protesting police violence “sons of bitches.” Players from both the NFL and NBA (and even a NASCAR driver) immediately fired back at Trump, and pro sports games throughout the weekend were filled with protests from players, coaches, and owners. Trump lost this fight, but he still insists on trying to fan the flames of hate, as Ring of Fire’s Farron Cousins explains.

On Friday evening during a speech in Alabama, Donald Trump decided to take aim, for some reason, at NFL players, specifically Colin Kaepernick, who decided to take a knee during the national anthem, a trend that started during the pre-season back in 2016. And Colin Kaepernick, again, the very first person to do that, to protest police brutality and the murder of African-Americans throughout this country by police officers.

Well, Friday night, Donald Trump goes in front of a crowd in Alabama and decides to refer to those players, he didn’t mention anybody by name, but he called them Sons of Bitches.

Well, that went over about as well as you would expect, with both members of the NBA and the NFL, Donald Trump eventually rescinded an offer for the Golden State Warriors, the NBA champions, to come visit the White House, to which Lebron James immediately lashed out at the president, saying, “You know what? It used to be an honor to go to the White House, but now that you’re there, it’s really not.”

But it was the NFL that really took center stage this weekend as Donald Trump, after that speech in Alabama on Friday, continued throughout Saturday and Sunday to tweet out insults against people in the NFL players, coaches, owners, everyone because they decided to make a stand. And in response to Trump’s statements, the entire NFL decided to take a stand by taking a knee on Sunday.

Most teams, most players showed some form of solidarity to the cause of police brutality, which Donald Trump immediately turned into talk of disrespecting our flag. See, here’s what happened. A lot of teams just stayed in the locker rooms and didn’t even come out for the National Anthem.

In two separate games, the person who actually sang the National Anthem ended up taking a knee after that was done. Many team owners and coaches came on to the field, linked arms with the players to show solidarity. Roger Goodell, the commissioner of the NFL, came out and denounced Trump’s statements.

Many other owners and players, including Donald Trump’s close friends Craft, who owns the Patriots, and Tom Brady of the Patriots himself, spoke out against Donald Trump’s comments. But Trump insisted that this entire issue was only about these players disrespecting the flag, and according to Trump, it had nothing to do with race at all.

Well, that statement alone, first of all, it’s completely false. Donald Trump called out black NFL and NBA players, because he’s a racist, but if you think none of this had anything to do about race, then you’re just as dumb as the president of the United States, because this entire thing started because of race.

Trump went as far as to say that the NFL needs to either fire or suspend these players who refuse to stand for the national anthem. First of all, idiot, you can’t do that because these people are under contract. You can’t just fire someone because then you still have to pay them the full amount of their contract, so pretty dumb move for an allegedly smart businessman.

Second of all, there is nowhere in the United States written that there is a law where you have to stand up for the pledge of allegiance or the national anthem. Not in the flag code. Nothing. There is nothing there. You cannot mandate somebody stand up and respect this symbol that you claim they’re disrespecting.

Respect has to be earned and right now, with what’s going on in this country, there is no respect that’s been earned. These people have every right to take a knee or to stay in the locker room, or to hold their heads or link arms and pray during the national anthem.

That is their first amendment right. You can’t do anything about it. All you’re doing is trying to divide people and deflect from the real issue, which is the ongoing problem of police officers killing unarmed black people in this country. You’ve made it all about you, Mr. Trump, and that is one of the most disgusting, despicable, and dare I say deplorable things that you have done since being sworn in as president.