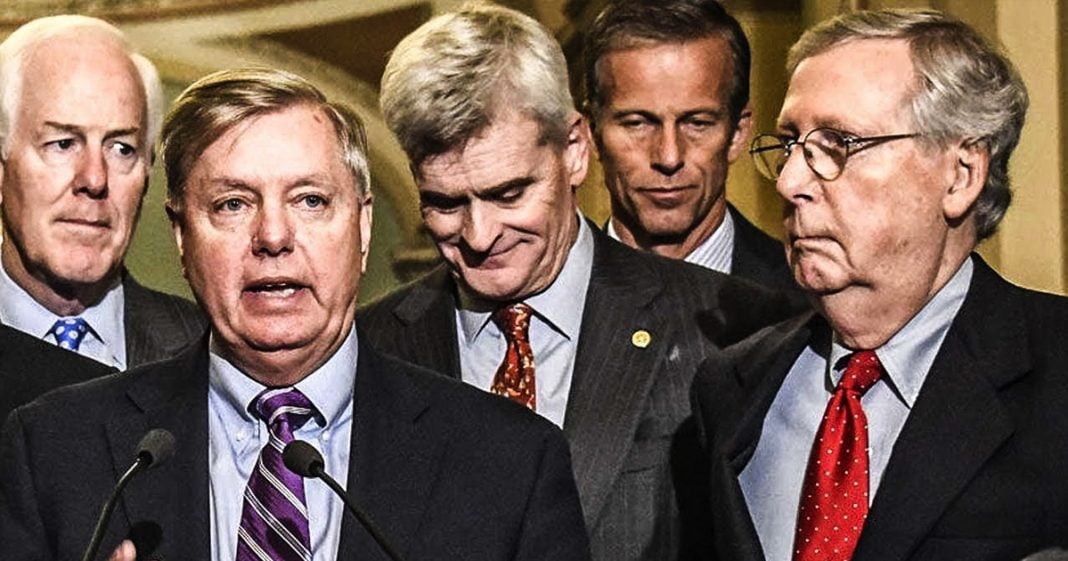 Republican supporters of the healthcare bill in the Senate are dropping like flies, so Republican leadership decided to throw a few extra bonuses into the legislation for the states of the holdouts. This tactic isn’t likely to work, as their opposition is based on the general effects of the bill, not on it lacking any personal incentives. Ring of Fire’s Farron Cousins explains.

Republicans in the U.S. Senate only have one week left to pass their disastrous health care law before they have to finalize the budget and get that passed with or without this health care legislation that they have tacked on as kind of an amendment-type thing to the bill. It’s not a standalone; it’s part of the budget bill. But since they continue to lose Republican support so far with Collins, Murkowski, McCain, and now even Ted Cruz and Rand Paul saying they’re probably not going to support this piece of legislation, Republicans in the Senate have decided that if we can’t win your vote with good policy, we’re going to win it with bribery, and that is exactly what they’re doing.

Late Sunday night, Republicans in the Senate came back, started rewriting some portions of this health care law to include massive giveaways in the form of tax breaks to the states where the senators who oppose the legislation come from, specifically, Maine, Alaska, Arizona, possibly even Texas. Basically, what they’re trying to do here is say, “If you pass this legislation, we’re going to give you a little bit more money for your state. You know, here, it’s not a bribe because it’s part of the legislation, but once it gets passed, there’s all of this money on the table, and I guess you should probably walk away with that and take it back to your state.”

Now this, again, perfectly legal form of bribery is one of the lowest insults that you could possibly imagine for these senators who are opposed to the current version of the health care law, because their opposition has nothing to do with the fact that they’re not getting anything for their states. It has to do with the fact that they’re not completely comfortable with passing a piece of legislation (1) that half the Senate hasn’t even read yet, (2) that the president doesn’t even know what’s in it, (3) that doesn’t have a CBO score, and (4) and most importantly, that it’s going to kick off 32 million people from their health insurance and result in tens of thousands of deaths by the year 2027 due to people not having health insurance coverage to be able to go treat conditions.

That’s what makes them a little leery to sign on to support this legislation, and if the little bit of money that you’re offering them is enough to go ahead and make them sign off on it, I doubt it’s going to be enough to save their careers because it’s pretty much a given that some of these Republicans who are opposed to it, some of them who are a little bit more moderate, will end up losing their jobs as a result of this vote once it turns out that this thing is as horrible as every analyst who’s looked at it has said it is.

That’s the bottom line here, folks. That is what we’re dealing with. This isn’t hyperbole. This isn’t conflating the argument. This is what happens, and it still happens to people every single day in this country, and Republicans want it to happen even more, but a few of them have enough sense … Some, they’re only doing it for political reasons. Others, because maybe they’re trying to save their legacy. Whatever the reason at this point, this piece of legislation should be the only thing that dies when we talk about health care coverage in the United States.