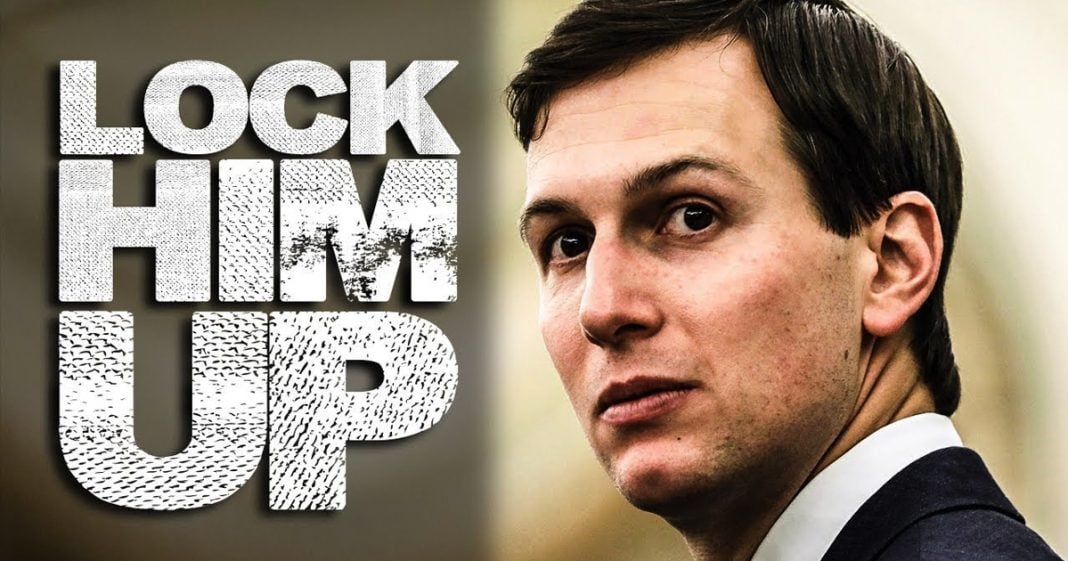 Republicans have been whining for years about the fact that Hillary Clinton used a private email server during her time as Secretary of State, but now they’ve fallen completely silent after it was revealed that Trump’s son-in-law has been using a private email to conduct official White House business. Kushner has a high level security clearance, and it is likely that he discussed secure information on the easily-hackable email account. Ring of Fire’s Farron Cousins discusses the Republican hypocrisy when it comes to email servers and politicians.

If you’ve been unfortunate enough to attend a Donald Trump rally anytime within the last two and a half years, you’ll have undoubtedly heard chants of “Lock her up”. Now those chants are in reference to Hillary Clinton and her use of a private email during her time as Secretary of State. Well now, guess what, folks, we can start a new chant for the Republicans to learn, and that chant is, “Lock him up”, and that is referring to Jared Kushner, Donald Trump’s son-in-law. Because as reports showed on Sunday this week, Jared Kushner has apparently been using a private email account during his time within the White House to conduct official White House business. So there you have it, the very thing that Republicans were so pissed off in Hillary Clinton for doing, it turns out their guys are doing the exact same thing.

Now, is this illegal? Kind of. It actually kind of is. You see, when you work within a presidential administration as Jared Kushner does, everything you do, every communication you send, is privy to the Presidential Records Act. It has to be preserved. When you’re conducting official business, which is what has to be preserved, on a private email account that the government does not have access to, you find yourself in violation of the Presidential Records Act, unless you turn over all of that information and allow investigators to go through and clear out your entire inbox to preserve every single thing, because you were stupid enough to use it for official White House business. Jared Kushner is definitely not going to do that. And like always, Jared Kushner is not going to experience any of the negative consequences that should come about somebody breaking a law.

But what this does point out is the Republican hypocrisy over a woman using a private email account vs. some guy like Jared Kushner, Donald Trumps son-in-law, who is using a personal email account to conduct business within the White House. And keep in mind, Jared Kushner still for some ungodly reason has his security clearance in place, so he has access to classified information to a certain level. We don’t know for sure if he discussed any classified information within these emails, the reports show so far that they haven’t found anything to indicate that, but that still doesn’t necessarily matter when you consider that the Presidential Records Act requires that all of those official communications be saved, so that they can be subject to a FOIA request and preserved for future generations. Jared Kushner is in violation of that. Jared Kushner is in violation of the law. And again, as usual, Jared Kushner will face no ill consequences for the fact that he refuses to obey the law in damn near every aspect of his life.

At this point, hearing about somebody within the Trump administration breaking the law or ignoring the law or flouting the law, it doesn’t even face us anymore. It’s something we expect from them. And that’s what has to change. We can’t become numb to these stories. We can’t become immune to them, and we can’t let the corporate media continue to not report about them. Monday morning New York Times had this story buried deep within the newspaper, less than 500 words on it, whereas they published more than 50 stories about Hillary Clinton and her email story between this time last year and the end of the year. They gave less than 500 words to Kushner, a current member of the Trump administration doing this today. We have to demand better. Not just from the corporate media, but from the White House itself. When we see that somebody breaks the law or break the rules or does something that could compromise U.S. security, they need to go. It’s as simple as that. They need to go. And Jared Kushner is long past his prime within the White House, and it’s time for this kid to spend the rest of his life behind bars.