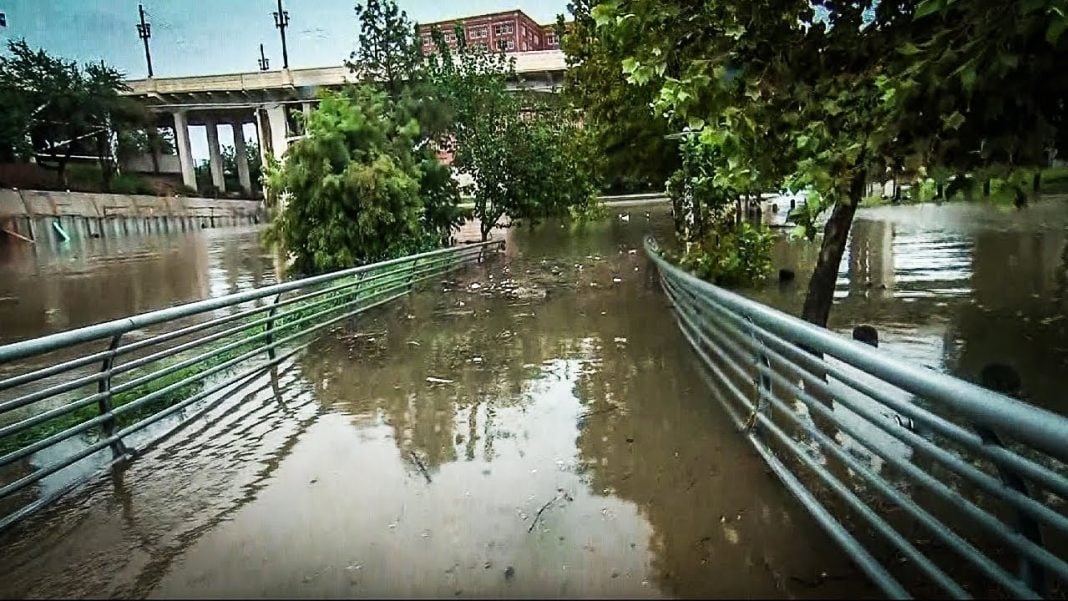 The flood waters may have receded in many areas of Texas, but the damage caused by those waters is still growing by the day. Many of the most polluted areas of Houston have been leaking toxic waste into both the streets and into waterways, created enormous health hazards that could linger for years. Ring of Fire’s Farron Cousins discusses why the EPA, the corporate media, and the public in general are ignoring this problem.

Ring of Fire needs your help! Support us by becoming a monthly patron on Patreon, and help keep progressive media alive!: https://www.patreon.com/TheRingofFire

While most of the media coverage of Hurricane Harvey focused on the people who were trying to escape the floodwaters or the massive damage that had been caused by the floodwaters, and yeah, even some taking some cheap shots at looters who were trying to get pairs of shoes after they had lost everything that they ever owned. Almost none of the media coverage of the damage caused by Hurricane Harvey has focused on the fact that there is literally toxic waste seeping out of Superfund sites and other oil refineries into the streets and waterways around Houston. The EPA, led by climate change-denying Scott Pruitt, has done a couple flyovers. He’s done a couple meet and greets at places like the US Oil Recovery, and they didn’t see any damage. They didn’t see anything that should be a cause for concern.

Well, independent flyovers and the pictures taken by these groups confirm that at places like US Oil Recovery, which is an oil waste disposal facility, has in fact had leaking toxic waste coming out of their concrete storage facilities and into bodies of water in Houston and into the streets. We also know that while the floodwaters were still there, many of these Superfund sites, these toxic waste sites, and these oil refineries, their waste was seeping into the actual floodwater so that when the water receded it took all that toxic waste with it, spreading it all over the city. These are problems that will persist for years. These are problems that are going to cause health issues for years, and yet the media is not talking about it. The EPA’s not doing anything about it. They’re claiming, literally, that the problem doesn’t exist, and the American public doesn’t seem like they care one bit either.

These are going to cause very real, potentially fatal problems for people all along Houston who use those waterways, who drink the water from the ground. They’re going to have a lifetime of problems, some of them, as a result of these toxic waste sites leaking water, leaking sludge into the streets and into the waterways, and nobody seems to care. Nobody’s talking about it. All the attention right now has turned to the destruction of Hurricane Irma, which to be honest, has actually … all of that coverage has left the airways. Now it’s about Hurricane Maria. Oh, we got another storm to worry about, so we can’t possibly talk about the lingering damage of storms like Hurricane Harvey and how that’s going to affect people for the rest of their lives.

We have to start caring about the environment. I don’t care if you don’t want to be a tree hugger, or if you don’t care about climate change. That’s your choice. You’re wrong, but it’s your choice. When we have instances of cancer-causing toxic sludge leaking into our streets, and our waterways, and our drinking water, that’s a problem that everybody should care about whether or not you believe in the science of climate change, or whether or not you believe that we need to protect the environment, because this is a public health issue at this point, and still nobody wants to talk about it. Nobody wants to think about it. Nobody seems to care about it, because to hell with those people in Houston. We’ve got our own shit to deal with, right?

These are problems that could happen anywhere in this country. We have way too many Superfund sites. We have way too many toxic waste sites, and all it takes is one natural disaster to turn your town into the next area that we’re talking about here with toxic sludge in the streets, toxic waste in your drinking water, and then suddenly you’re going to feel bad realizing that you know what? I didn’t care when it happened to them, and now nobody cares when it happens to me.