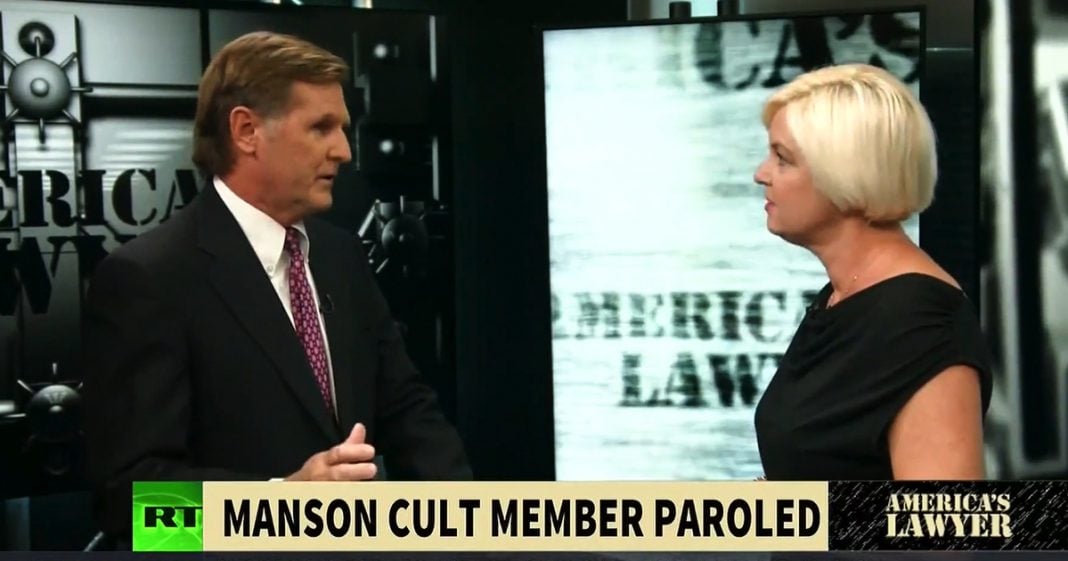 Via America’s Lawyer: Mike Papantonio is joined by Mollye Barrows, Legal Journalist for The Trial Lawyer Magazine, to talk about how a Charles Manson cult member involved in a brutal murder was just paroled.

Mike Papantonio: After more than four decades behind bars, Charles Manson cult member Leslie Van Houten has just granted parole. It’s now up to California Governor Jerry Brown to decide whether or not she should be released back into society. Van Houten went to prison in 1969 for the brutal, brutal murders of Leno and Rosemary LaBianca, a Los Angeles grocer and his wife murdered by Manson and his followers during a bloody killing spree that also included the massacre of pregnant actress Sharon Tate and four others. Van Houten wasn’t part of the highly publicized Tate murders, but she was sentenced to life for the brutal murder of all those other folks.

Joining me now for more on this is legal journalist for Trial Lawyer Magazine, Mollye Barrows. Mollye I’m outraged the parole board would even give this woman a second chance. This is a woman, that under the law, before the law changed, should have been executed.

Mollye Barrows: She was on her way.

Mike Papantonio: That absolutely should have been executed. I have no sympathy for this woman, no sympathy for the Manson family whatsoever. The idea of any of them getting out is just so deplorable to me. What’s your take?

Mollye Barrows: Well I know, and a lot of people feel the same way you do. In fact the parole board told Van Houten when she came up this last time to get her parole, they said, ‘We’ve received tens of thousands of letters from people who do not want you back out on the street.’ But that didn’t stop them. They still said that she’s met the legal requirements of making parole, so they granted it to her this year, just like they granted it to her last year. Last year Governor Jerry Brown of California stepped forward after reviewing the decision and said, ‘No. I’m going to veto this. She is not allowed back out.’ She went back up before the parole board again this year, it made her 21st time, and they did grant it again. Now she’s got to go through that review process.

Mike Papantonio: What there is, just so everybody understands, it’s a checkbox that these parole boards go through. Sometimes you have such extraordinary circumstances that you have to say, you know what the checkbox doesn’t work anymore. I personally am going to write Jerry Brown, and I hope everybody watching this show will write Jerry Brown and not let this happen. If you go back and read Helter Skelter, if you take a look at what this family of lunatics did to so many people. The idea of her walking the street, I don’t care how old she is. What is she 60-.

Mike Papantonio: 68. I don’t care if she’s 99, she needs to die in that prison. These people did not get a second chance to be paroled that she murdered. This particular … And I, full disclosure-.

Mike Papantonio: I come from a prosecutorial background.

Mollye Barrows: It doesn’t show, not at all.

Mike Papantonio: What is your take?

Mollye Barrows: Well it’s interesting to me because there were two issues that jumped out when I was looking this over. One is what you said about if she’s met the legal requirements for parole, despite the circumstances that she’s done that, the circumstances of the heinousness of her crime should play in keeping her in prison. I think a lot of people feel that way. On the other side of that, for instance the Los Angeles Daily Times is getting, those area papers are getting letters to the editors saying, ‘Hey. If you don’t let her out, and she’s modeled good behavior,’ because that was one of the reasons that the parole board said she should get out, she started numerous programs that have helped other inmates. She’s been a model of good behavior, received her Bachelor and Master’s degree in counseling. I’m not saying bleeding heart, I’m saying other people are like, ‘Hey. She could be a model for other … it would be a deterrent to other inmates if she was denied.’

Mike Papantonio: You know it sounds like she’s doing a lot of great things in prison.

Mollye Barrows: To make up for murdering people.

Mike Papantonio: Keep her in prison. Let her do those great things in prison, but putting her back out on the street is just so deplorable.

Mollye Barrows: The victim’s family does not want her back out on the street. They were there for the latest parole board hearing as well.

Mollye Barrows: She did, like you said, she was going to get the death penalty, but then it was revoked. They banned it in 1972, so she automatically got that life with the possibility of parole.