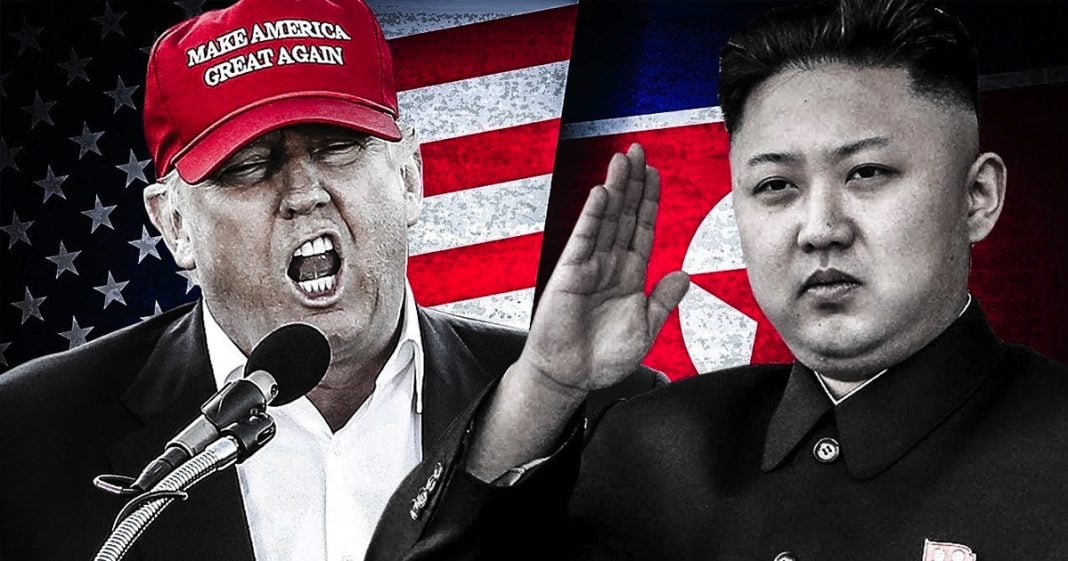 Earlier this week during a speech at the U.N., Donald Trump referred to North Korean dictator Kim Jong-un as “Rocket Man,” which prompted Kim to refer to Trump later in the week as a “madman.” This is a battle of wits that neither side is armed to fight, and meanwhile the rest of the world is looking at us in horror as our President continues to antagonize an unstable regime hellbent on destruction. Ring of Fire’s Farron Cousins discusses this.

Here’s the problem, folks. Right now the entire world is watching in horror as the president of the United States engages in an epic insult battle with Kim Jong-un as if any of that is going to solve any of the problems that we’re having with that country. Donald Trump may want to go nuke North Korea. He may want to go drop some bombs, which he strongly hinted at during his UN speech, which would effectively kill about 25 million people, 99.9% of whom have nothing to do with the current Kim Jong-un regime. Yes, something needs to be done about Kim Jong-un, but we can’t just go over there and throw bombs, and sure as hell can’t just sit here and throw insults and expect that to make any kind of difference.

You know, one of the big stories that came out this week was that in spite of the sanctions that we and the rest of the world have placed on North Korea, Russia is still selling them fuel even though it’s against these sanctions that we and, again, other countries have put in place, so if Donald Trump was serious about wanting to do something about the regime, maybe he should go talk to his good friend Vladimir Putin and say, “Why aren’t you respecting the laws that we have in place? Why are you selling them fuels?” But of course Donald Trump is not going to do that because he’s a big, giant coward. He would rather sit thousands of miles away from the situation and just lob his childish insults.

Again, this is a battle of wits between two of the craziest world leaders on the planet and Donald Trump is actually using … losing, excuse me, because Kim Jong-un reads. He clearly isn’t that stupid. Now that doesn’t speak to his level of crazy, but he knows a hell of a lot more than Donald Trump about literature and how to make a good insult because Donald Trump is getting his ass kicked in this fight right now, but let me bring it a little more closer to home, specifically my home. Right now I have a problem in my neighborhood. There is a big black bear that’s going around every day and he’s getting into people’s trash cans. This morning I woke up. All of my trash had been thrown out all over my yard because the bear was there last night and he did.

Now a bear is a dangerous creature, not unlike Kim Jong-un, so rather than going outside and just insulting the bear because he’s throwing my trash around the yard, I picked up the trash and I put new clamps on to the lid so that it can’t be opened by a bear anymore. Those clamps are basically sanctions against the bear. Now Donald Trump, if he was smart and levelheaded, would do something similar to Kim Jong-un. I’m not saying we go over there and put clamps on his garbage cans, but you get my drift on this. Donald Trump cannot be trusted to handle this situation. Hell, he can’t even be trusted to win an insult battle, so why on earth are we looking to him to some kind of leadership on this?

At this point we need to start lobbying other countries, Canada, the United Kingdom, France, Germany. I don’t know who, but someone else to take the lead in this situation because Donald Trump threw his childish behavior, has abdicated the throne in this instance, and now we have to look somewhere else to find someone to prevent a thermonuclear war between the United States and North Korea.