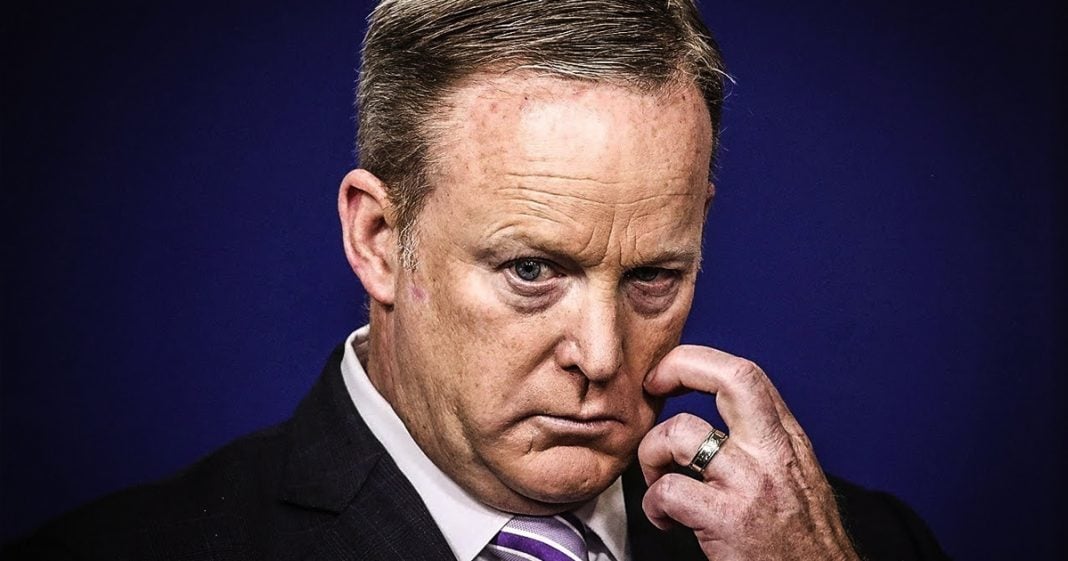 During his short tenure in the White House, former Press Secretary Sean Spicer apparently wrote down everything from every meeting that he attended. Now, these notebooks containing information about what transpired at all of these meetings could end up in the hands of special prosecutor Bob Mueller as he attempts to find out who in the administration was working with the Russians. Ring of Fire’s Farron Cousins discusses this.

It was obvious any time Sean Spicer got in front of a news camera or had to do any kind of press conference that he wasn’t the brightest bulb within the Trump administration. So, it comes as no surprise that any time Sean Spicer had to attend a meeting, which he attended more than probably anyone other than Donald Trump himself, he brought along a notebook where he would take detailed notes about everything that was discussed in all of these meetings, something that previous administrations and the Trump administration itself have frowned upon because not everything that’s discussed in those meetings is something that they want written down for future generations to possibly stumble upon. Yet, that is what Sean Spicer did because I guess he wanted to make sure he didn’t miss anything and that he understood what was going on, again, because he was new to his job and he wasn’t very good at it. So, kudos to you on taking the initiative to make sure that you got everything you needed to get, so that you didn’t come across as a bumbling idiot.

Unfortunately for you, Sean Spicer, those notebooks, and reports say that he has many, many, many notebooks full of notes from all these meetings, are now squarely in the sights of the special investigator, Robert Mueller, who might be asking Sean Spicer to turn over those notebooks, so that he gets a clearer picture of what actually happened behind the scenes at the White House, what was discussed, whether or not Donald Trump was asking people to go to the bat … Go to the mat and lie for him, whether he was telling people to stop this Russia investigation. You know, the kinds of things that could very easily be prosecuted as obstruction of justice. The answer to whether or not any of those things actually occurred lies within those Sean Spicer notebooks.

Considering the fact that Donald Trump hasn’t been the nicest guy in the world to Sean Spicer, and Sean Spicer is clearly trying to rehabilitate his image at this point, he may end up more than willing to turn those notebooks over to Bob Mueller. We do know at this point that Mueller definitely wants to talk to Sean Spicer, that Sean Spicer should probably be getting legal representation if he does not have it already, but those notebooks are a treasure trove of potentially prosecutable offenses. Right now, Sean Spicer is holding all of the cards.

Mueller could easily get a warrant and confiscate these notebooks if he chooses to, but I don’t think it’s going to go that far. I think Sean Spicer will end up turning over these notebooks and rolling on the entire Trump administration over the way that he was treated, and over the fact that they’ve caused irreparable damage to his overall reputation.

Now, none of this will vindicate Sean Spicer. I mean, the guy pretty much proved for seven, eight, straight months that he’s a complete piece of crap, willing to lie for money. But still, if he holds the key to taking down the Trump administration with those notebooks, I will admit that he could finally do something good for this country.