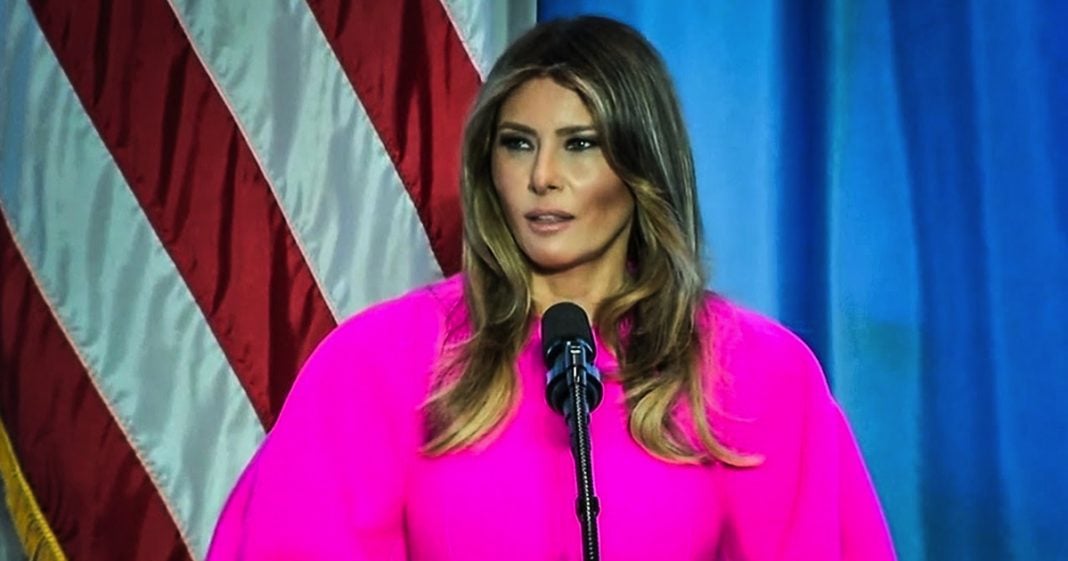 Melanie Trump has made her anti-bullying campaign the number goal while she is First Lady. And while it is certainly an admirable fight, if she really wants to stop bullying, she could start with the man that she married. Donald Trump has proven time and time again that he is nothing more than a cheap bully, yet Melania has refused to call him out on it. Ring of Fire’s Farron Cousins points out the hypocrisy of Melania’s campaign.

First Lady Melania Trump has made anti-bullying, her anti-bullying campaign, really the hallmark of her time as First Lady. In fact, this week on Wednesday, she gave a speech at the United Nations to other first ladies from around the world about her anti-bullying initiative. Take a look.

Melania Trump: We must teach child the values of empathy and communication that are at the core of the kindness, mindfulness, integrity, and leadership which can only be taught by example. We must remember that they are watching and listening, so we must never miss an opportunity to teach life’s many ethical lessons along the way.

That’s great. This is an absolutely noble cause. It’s one that we need to be addressing as a country, and it is a very severe problem in the United States. The issue of bullying, cyber-bullying, all of that, is something that needs to be fixed. I congratulate Melania Trump for making this his centerpiece.

However, you can’t go out there and talk about the need to stop bullying without addressing the fact that your husband, the President of the United States, is one of the biggest bullies in this country, certainly the biggest bully with the loudest microphone in this country. In all of the times that Melania Trump has talked about her anti-bullying campaign, not one single time has she ever addressed the fact that her husband loves to get on Twitter and insult people, insult their appearance, insult their choice of clothing, insult their intelligence, insult their news outlets and organizations that they work for.

He insults everything and everyone with impunity. He doesn’t care. Clearly, neither do you, which means your entire anti-bullying crusade is a complete sham. Nobody should be taking you seriously when you say that you want to put an end to this, when all you have to do to really make a difference is walk into the Oval Office and tell your husband to cut the crap. You won’t do that.

Donald Trump has insulted 367 people, places, and things on Twitter alone this year, since he became president. 367. Again, that’s just on Twitter. That doesn’t include the people that he makes fun of when he goes out and does a rally, or gives a speech, or holds a press conference, like the disabled reporter that he mocked, and then blatantly said during one of the 2016 debates that it never happened.

It did, and you, Melania, due to the fact that you refuse to speak out against it, are complacent. You are an accomplice in it if you say nothing. Isn’t that what your whole campaign is about? If you say something, say something? Like those little warnings they give us over the airport PA system? You could be really making a change in this particular area, but you won’t. You won’t stand up to that bully that you married, because you’re not serious about this campaign.

Furthermore, if you were serious about it, not only would you talk to the president, you would apologize on his behalf. You would go out there and try to make things right. Instead, just like the president, you spend most of your time on vacation, not worrying about everybody else in this country. Michelle Obama, when she was First Lady working on her healthy foods initiative, she gave tons of interviews. She went on Food Network a couple of times to talk about clean eating. She went on other shows. She went out there into the country and worked on this. You’re not doing that. You’re following your husband blindly as he continues to bully and basically denigrate large portions of not just the United States but people around the world. You don’t care about bullying, because if you did, you would have divorced Donald Trump a long time ago.