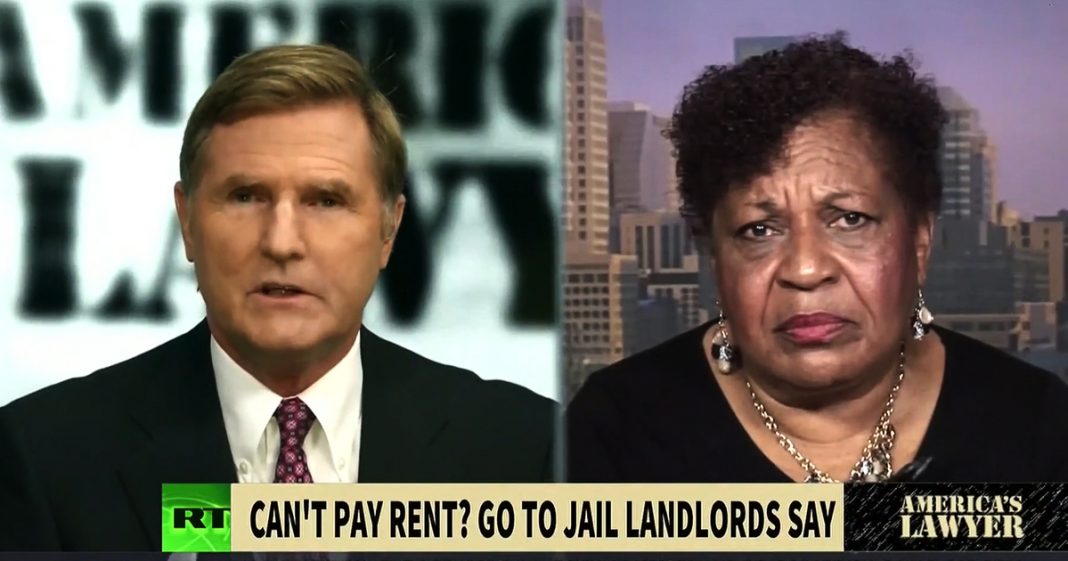 Via America’s Lawyer: Mike Papantonio talks with Tessa Hill-Aston, NAACP Baltimore City President about how a Jared Kushner company has been requesting civil arrests on people who can’t pay their rents.

Mike Papantonio: Can you go to jail for not paying your rent? Baltimore City landlords and Maryland say definitely yes, but the company criticized most for this practice is the Kushner Company and that’s not only because the previous CEO of Kushner Company was Jared Kushner, but because his company is known for having sought out the most civil arrests to collect debt. Joining me now to talk about this is Tessa Hill-Aston, President of the Baltimore City NAACP. Tessa, the way I see these numbers, more than a thousand legal actions in Maryland were filed by Kushner affiliates and court documents say 20 have been detained. Tell us about this story. It’s incredible, and again, this is not a story anybody’s talking about.

Tessa Hill-Aston: Yes, it certainly is and we’re just starting to hear a lot about it, I guess because of him being Trump’s son-in-law. A lot of people will go to court and the average tenant, they don’t go to court with knowledge of what their rights are. They go to court looking to try to see if they can pay their rent that they owe in order to stay in place. Unfortunately, they don’t have a lawyer and they don’t have an advocate. An advocate cannot stand up.

What happens is that a lawyer with a lot of knowledge, or a representative from the Kushner Company will come in and talk louder and faster than the tenant and they win, then they get evicted. If that doesn’t happen, if the person doesn’t show up for some reason and there’s lots of reasons why they don’t, two or three years or even six months later, they could be at a new address or at work and a Sheriff will come and detain them and they’re not sure what they’re being locked up for, and it’s because they owe maybe two, three, four hundred and not a lot of money. It’s not like thousands of dollar, it’s usually less than five hundred and they get locked up and detained in jail and then they have to pay to get out and then still go to Court for these debts that Kushner’s company is filing on them. It’s a terrible situation for people to be in.

Mike Papantonio: Yeah. Tessa, we use to call this “debtors’ prison.” We did away with debtors’ prison in the United States because we don’t throw people in prison because they can’t pay bills. But, that’s the way it used to be in the United States and then we did away with debtors’ prison. But, here you have this thing called body attachment and body attachment is where they simply go out and they’ve issued over a hundred of these by Judges in Baltimore where they’ve gone out and actually grabbed the people, brought ’em into debtors’ prison, and then Kushner says, ‘Well, we’re not gonna let ’em out til we find a way to get our money.’

What you have here is you have the powerful just trampling all over the powerless. I mean, if he didn’t want to rent to that person, then he doesn’t have to rent. If he doesn’t want to be in this business and understand there’s risks to the business, you’re not always gonna get paid, then don’t get into the business. But, here, this has been turned upside down, it’s on its head and it’s amazing to me that Baltimore, of all places, is so all in on this. What’s your take?

Tessa Hill-Aston: I think it’s terrible that Baltimore because right now, it’s unfortunate, but for the past year I’ve seen documentation that Baltimore is in the top cities, in five or ten cities, and number one maybe of evictions, and this is one of the situations that is affecting us. It happens to people of all walks of life. There’s been some professional people who’ve gotten caught up in this, and a lot of times, it’s a single female with children, who cannot afford to pay or something happens to her life, but no one should be evicted or have a body attachment because of rent or because of a debt. There’s so many resources, but most people do not know what to do in a timely fashion. Some women don’t even know to put their money in escrow and even when I’ve seen people who have their money in escrow, when they go to Court, the Judges have still favored the landlord because they’re slicker. What happens is that the tenant gets the raw end of the deal and it happens all the time, and it’s happening too much in Baltimore.

I’m hoping, along with myself with the NAACP and some other lawyers and some advocates, that when January gets here and our legislative session starts in Annapolis that we can go to the Governor and go to the legislative bodies of Senators and Delegates and ask them to put in a bill to try to do some adjustments with this because it’s totally unfair to the working class people.

Mike Papantonio: Tessa, let me put this in perspective for you, okay. We just got through doing a story on Dow Chemical making a product that’s causing brain damage in children. We see it every day. Pharmaceutical companies killing people by the thousands because they keep a product out on the market that they know is defective, and it’s causing harm. We see Wall Street, what stole eight trillion dollars from the American economy. Who went to prison there? Nobody. These folks, if you’re dressed up in a three-piece suit and you have a Rolex watch on and you happen to be in some big tower on Wall Street, you don’t go to prison. But, here we have people being arrested, literally arrested and thrown in jail because they haven’t paid Kushner his rent. That is the dichotomy of where we are in the US today.

Mike Papantonio: There is this double standard of justice. Can you imagine somebody being thrown in jail because they didn’t pay their rent and having a police officer go up and attach ’em by taking ’em into possession and taking ’em into a jail because they didn’t pay the rent, but we have these cats that are killing people by the thousands all over this country. They’re stealing money by way of every kind of scam, stealing from Mom and Pop, that we have all of this problem in the US where we have this double standard and this to me, this story to me, really lands that double standard. What is your take on that?

Tessa Hill-Aston: I agree with you one hundred percent because what happens … Let’s think about what happens the day that that person has a body attachment and is taken from their home or from their job, then that means they go to jail, they have a record, they probably will lose their job because if they don’t get out of jail within a timely fashion and don’t show up to work. Their children are at home and then some family members or friends have to jump in. It’s a whole rippling effect of what happens to that person to put them in this kind of situation for just a rent debt and a body attachment. It’s deplorable and it happens too much and it’s not worth it.

They’re paying a $150 to fill out the forms to get this done, a measly $150 to have someone go serve a body attachment. What happens is that a lot of the property that Kushner gets, he’s being subsidized by government funds, Fanny Mae, Freddie Mac, government, HUD. It’s for poor people and that’s deplorable that he’s getting government funds to have poor people, or low income people live in his property and then he’s gonna do more damage and he’s getting extra benefits and tax reduction and then he’s gonna take ’em to Court because he doesn’t get $300.

Mike Papantonio: Tessa. It’s worse than that. If you really want to land this, you know what, he has the government working for him. In other words, he’s getting all these other benefits, tax benefits, subsidy benefits, you name it. Now, Kushner has got the government working for him to collect his debt and while we’re attaching somebody’s body and throwing him in yield, you got some cat in Wall Street that’s stealing billions of dollars from Mom and Pop-type pension programs and nobody goes to jail the first time. I gotta tell you something, I’m glad you’re out there. I hope the NAACP will make this a big story. At this point, it is not a big story and that’s embarrassing. We don’t see this story reported on corporate media because there’s no money in it. The NAACP is not a big advertiser with MSNBC …

Mike Papantonio: And because of that, it’s tuff for you get these stories out.

Mike Papantonio: I’m glad you could come on and talk to us today. Okay. Really, keep up the great work. It’s so important.

Tessa Hill-Aston: Thank you so much. Thank you.