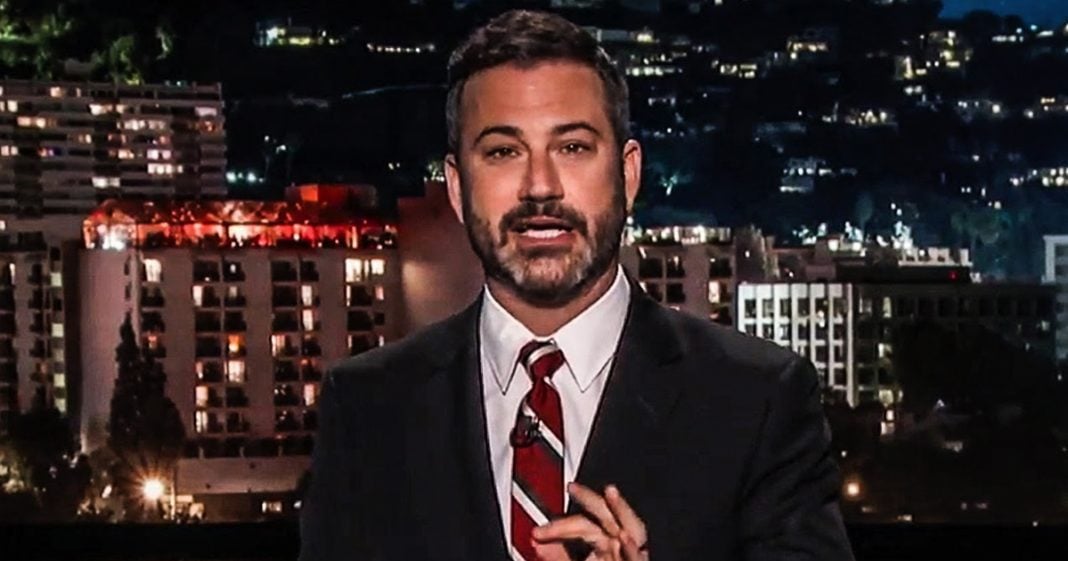 Late night talk show host and comedian Jimmy Kimmel has been one of the more vocal celebrities with regards to the Republican plan to “repeal and replace” Obamacare, and the latest version of the bill in the Senate has made him understandably angry. This week Kimmel has pounded Donald Trump, Bill Cassidy (the co-sponsor of the legislation), Chris Christie, Fox & Friends host Brian Kilmeade, and all of the Republican sycophants who support this disaster of a bill. Ring of Fire’s Farron Cousins explains why Kimmel’s voice is so important in this fight.

Republicans in the Senate still have about nine days left to pass their horrible health care bill known as the Graham-Cassidy bill. So far, just like last time, one of the loudest voices speaking out about this disaster of a bill is late night talk show host Jimmy Kimmel from Jimmy Kimmel Live. So far this week, Jimmy Kimmel has spent an extraordinary amount of time talking about the dangers of this health care legislation again, just like he did over the summer. He took the time to call out basically everyone who is pushing this horrible piece of legislation.

But let’s start with the most obvious, back in the summer when Jimmy Kimmel was one of the most vocal people speaking out against the legislation, he mentioned the fact that his son had recently had surgery that is now a pre-existing condition that the child has to carry with him for the rest of his life. The family’s insurance rates go up, and under the Republican plan, they would lose their health insurance coverage, or their health insurance company’s could either jack up the rates, or deny them completely.

After he gave his impassioned monologue back then, Senator Cassidy, Bill Cassidy came on the show, and invoked what he called the Kimmel Test, to make sure that no healthcare legislation from Republicans would deny people with pre-existing conditions, or jack up your rates just because of pre-existing conditions. That was the Kimmel Test, and it was Cassidy himself who came up with it, and he promised never to support legislation that didn’t pass that test.

Well this week, Jimmy Kimmel called out Senator Cassidy for clearly lying to his face about the kind of legislation he would support, not to mention the fact that Cassidy’s one of the guys who wrote this actual disaster legislation that’s currently going through the Senate. Here’s was Kimmel said about that initial interview he had with Cassidy, “He proposed a bill that would allow states to do all the things he said he would not let them do. He made a total about face, which means he either doesn’t understand his own bill, or he lied to me. It’s simple as that.”

Well, I’m going to go out on a limb here, and say that, yeah, Cassidy clearly lied about this. But he didn’t just lie to Jimmy Kimmel, he lied to every single one of us, and thankfully, Jimmy Kimmel is taking the time to call him out on this. Because yes, it personally affect Jimmy Kimmel, it also personally affects every single person in this country, except maybe the one percent, because they’re the ones who are getting a tax break from this legislation. But this, the fact that Kimmel, once again has to come out, and essentially take over the role of democratic politicians, who should be out there in the media saying the exact same things that Kimmel is, not talking in policy terms, or giving us this roundabout, “Oh, the Republican bill’s bad, bad, bad.”

Kimmel called out the lies, he played the old clip, played or explained what’s in the bill, and then flat out said he lied. He lied to me, he lied to you, he lied to all of us, and that’s what you need to know. Kimmel’s the one leading this. I haven’t seen any politicians come out, and talk as succinctly and honestly as Kimmel has about this piece of legislation. But again, it didn’t just stop at Cassidy, Kimmel went on, and he went after Donald Trump, he went after Brian Kilmeade on Fox and Friends, who’s attacking Kimmel for taking such an outspoken lead as far as opposition to this health care bill goes. He went as far as to mention the fact that Brian Kilmeade kisses his ass in public any time they meet, and even asked Kimmel to write a blurb for his book, which Kimmel says he did. But Kilmeade is a big tough guy on TV, and according Kimmel, not so much when you meet him in person.

He also took time to call out Lindsey Graham, the other co-writer of the bill with Bill Cassidy, Donald Trump, and Chris Christie. Jimmy Kimmel is hitting on all fronts. I’m not saying he’s the only one out there, but he is damn sure the most vocal about this. He’s telling more people than anyone else is at the moment. Kimmel, a late night talk show host, while I admire what he’s doing, he shouldn’t have to be the one doing this. That is the job of the media. That is the job of politicians, not entertainers. Yes, it’s great that he’s doing it, but it’s also sad that he has to.

There are people who’s job it is to do those kinds of things, but they suck so badly at it, that we have to rely on late night talk show hosts, and comedians like Kimmel, or Samantha Bee Or John Oliver to come out there, and actually give us the truth, and explain it in a way that every single person in this country can understand. That’s what politicians are supposed to do. Instead, we have to get the real news from late night talk show hosts.