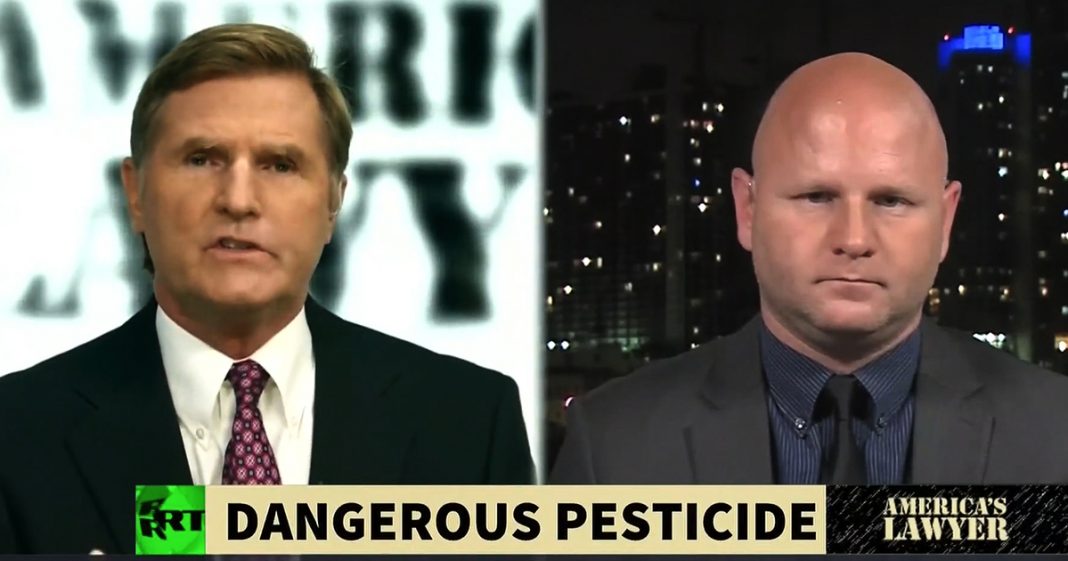 Via America’s Lawyer: Mike Papantonio discusses how newly-appointed EPA Chief Scott Pruitt decided to end the discussion on a dangerous Dow Company pesticide once and for all by saying that the pesticide was good for release. Then, Mike is joined by Farron Cousins to help explain the dangers of Chlorpyrifos.

Mike Papantonio: In 1965, Dow AgroSciences brought a pesticide called chlorpyrifos to the market. The pesticide became widely used on crops all over the world due to how effective it was at killing mosquitos, ants, roaches, and other insects that pose a threat to the global food supply. 52 years after it was first introduced, the pesticide is used in more than 100 countries around the globe on more than 50 different kinds of commercial crops. If you live in the United States and have eaten an apple, lettuce, peaches, oranges, bananas, or potatoes in the last 50 years, then chances are you’ve eaten food that had been sprayed with Dow’s chlorpyrifos.

The EPA estimated that between 1987 and 1998 about 21 million pounds of this pesticide were used annually in the US. By 2007, chlorpyrifos was the most commonly used organo-phosphate pesticide in the United States, with an estimated 8 to 11 million pounds applied to our food and to non-residential turf like golf courses.

Like most pesticides, chlorpyrifos is a neurotoxin that disrupts the normal function of the nervous system in insects, leading to death. But as years of scientific research is now telling us, this dangerous pesticide can also act as a neurotoxin in human beings. Even though Dow chemical claims that their pesticide is completely harmless to human beings at normal doses, we’ve heard that before, science tells us that exposure can cause very serious and very permanent damage to the nervous systems of people who are exposed.

Experimental animal studies suggest that infants and children are more susceptible than adults to effects from low dose exposure, because they have a decreased capacity to detoxify chlorpyrifos and its metabolites. This results in disruption in the nervous system developmental processes. Exposure by pregnant women or infants can lead to impaired brain development, resulting in a lifetime of hardship. These are developmental injuries that cannot be overcome or corrected. Once brain development is impaired, the damage is permanent.

Among adults, applicators of the pesticide on farms were noted to have a far higher incidence of lung cancer than the general population – as well as among the population of farmers that use other forms of pest control. They are also far more likely to develop a condition called “Wheeze” which occurs when the airway becomes restricted after repeated long term exposure to even the allegedly “safe” levels of this pesticide. There really might not be safe levels.
Joining me now to explain this story a little bit is Farron Cousins, executive editor of the Trial Lawyer Magazine. Farron, let’s start with the pesticide itself. What does the science tell us about this chemical?

Joining me now to explain this story a little bit is Farron Cousins, executive editor of the Trial Lawyer Magazine. Farron, let’s start with the pesticide itself. What does the science tell us about this chemical?

Farron Cousins: The science is telling us that this chemical is far more toxic and dangerous than anything that Dow Chemical has ever told us. Scientists have been studying this particular chlorpyrifos for decades now. It’s telling us, just like it works on insects as a neurotoxin, it is doing the same thing to human beings. We know that pregnant women exposed to this pesticide are more likely to give birth to children with neurological impairments, low birth weight, brain malformations. These children grow up with lower IQs, lower attention spans, a lower working memory than normal children who were not exposed to this. That is just the tip of the iceberg in what we’re seeing in children. We’re also, as you pointed out, the farmers who use this pesticide are exposed to it every day are developing very serious respiratory diseases. They have a 50% more likelihood chance of developing lung cancer than the general population, even though, on average, they have a 50% lower tobacco use rate than the general population. You can rule out outside factors, like tobacco use with their lung cancers.

Mike Papantonio: Isn’t this the same story that we hear again, and again, and again, from the chemical industry? It always starts out that they’re trying to get a chemical like this pushed through the EPA. They’re calling on all their political ammunition, all of their financial ammunition, all of their media, which seems to adore the chemical industry, because they advertise so much on places like MSNBC. You won’t see this story, by the way, on MSNBC, because they can’t tell the story. They’re advertisers don’t allow them to do it. We see the same thing play out.

Then we find out, oh, all of a sudden, we start taking a look at the clinical data, and the clinical data is deplorable. Then we go back and we ask the regulators, ‘Why didn’t you do something about it?’ We ask the media, ‘Why didn’t you report about it?’ That’s thousands of people dead by then, dead and injured by then. Isn’t this just the same story we see time and time again from DuPont, Dow Chemical, name the chemical, Monsanto, name the chemical? We’ve seen this played out again and again, because, A, the media has no more guts to tell these stories, B, we don’t have a regulatory system that even works mildly anymore, and C, you don’t have a government at all that’s going to do anything more than slap these people on the wrist when they get caught. Nobody goes to jail. They kill thousands of people, nobody goes to jail. What’s your take? How is this any different at all than all the cases that we have to report on this show?

Farron Cousins: Well, what’s remarkable about it is that it’s not remarkable in that regard. You could replace word chlorpyrifos with C8, with Spelter, West Virginia, with RoundUp. You can replace the word, Dow, with Merck, Pfizer, AstraZeneca, any other major company, Monsanto and DuPont, as you pointed out. It’s the exact same – It’s like they’re all reading out of the same playbook.

We make this horrible toxin. Our internal study show that it’s terrible and kills people. By the way, chlorpyrifos is killing 10,000 people around the globe annually. Anyway, we make this toxin. It’s killing people. We know it. We present this to the regulatory agencies. We tell them, ‘Look, these studies can’t really be trusted. Trust us, though, it’s a safe chemical.’ Regulatory agency signs off on it. The lawsuits begin, the documents are uncovered. It’s the same story every time.

The corporate media then has to play catch-up, like suddenly, ‘Oh, well we didn’t know this was happening. We didn’t know what was going on.’ Yes you did. Independent outlets have been reporting on it for years, even in the case of chlorpyrifos. The EPA itself has come out with negative studies on it. Corporate media ignored it, just like they always do.

Mike Papantonio: Okay, let me ask you this. Corporate media, this is part of the story. Don’t you see? This is part of the story. Last week, we heard MSNBC talking about, ‘Oh my gosh. RT has to register as a foreign agent, now they must be doing something wrong.’ Well, no. Every company that does business in the United States from another country has to register. All of sudden, why do they attack an organization like RT, or Al Jazeera, or these independent organizations? Why do they attack us? Because we tell these stories that they are ordered, from 50th floor, ‘Don’t tell that story, because you’re going to dry up advertising dollars.’ By god, here you’ve got a product that’s killing people, that is injuring the brains of small children. You go to MSNBC, see if you can find them reporting one time about this, where they actually do a story that means something. Okay. What do we know about this chemical that is absolutely undisputed? What do we know about the dangers of this chemical?

Farron Cousins: Well, here’s what we know. We already talked about the health effect, but let me read to you what the EPA itself announced that they put out last November, November 2016. Here it is, “All food exposures exceeded safe levels. Children ages one to two exposed to levels of chlorpyrifos that are 140 times more than the EPA has deemed safe. There’s no safe level of chlorpyrifos for drinking water,” meaning if any of it gets into the water, it is contaminated and unusable, but we still drink it anyway. “Pesticide drift can reach unsafe levels at 300 feet from the edge of a farm where it’s sprayed. Residual pesticide residue is dangerous even 18 days after application to crops.”

There’s no safe level for this. I mean, hell, the EPA banned it for use in homes early in the years 2000, 2001. Said, ‘No. This is so dangerous, we can’t have normal people going to the hardware store, buying it, and putting it on their lawns, because it could kill them.’ Yet, in March of this year, Scott Pruitt, the new head of the EPA said, ‘You know what? I’m going to ignore the science. I’m going to side with my buddies over in industry, and we’re going to end the debate or chlorpyrifos once and for all. So, have at it farmers. Dump it as much as you want.’

Mike Papantonio: We see it on every story. We see it on every story, whether it’s RoundUp, we’ve got Monsanto that’s killing people with RoundUp, causing blood diseases that are killing people. I defy you. If you’re watching this program, go and find one time where a station like MSNBC has reported anything about chlorpyrifos where they tell the truth about what the story is behind the story. You won’t find it. The reason you won’t find it, because they get huge advertising dollars from people like Monsanto, and Dow, and DuPont, and you’ll never get these stories until somebody in your family is sick or dying from something like this product. That’s when you’re going to get the story.

They’ll attack independent media, like RT, or like Al Jazeera, or the independent TV stations, because we can tell the story, because we don’t have advertisers telling us, ‘No. You better not tell that story.’ We don’t care. We tell the story if it’s true. That’s part of the problem here, Farron. The part of the problem where we don’t have any help from corporate media getting these stories out. At this point, it’s done deal, isn’t it? You’ve got Pruitt who’s owned and operated by Trump, owned and operated by the industry, this is going to happen, isn’t it?

Farron Cousins: Unfortunately, yes. Just like all of the other instances, eventually, what’s going to bring this to light, what’s going to bring it to the corporate media attention, is when the lawsuits begin to be filed, because we know that Dow knows about the dangers. We know they’re underplaying the dangers, and we know that this thing is causing significant problems in children and in farmers. Ten thousand deaths a year across the globe in more than 100 countries combined. Yeah, this thing is going to eventually make it to the news, but only because Dow is going to find themselves in hot water and nobody is going to be able to ignore it at that point.