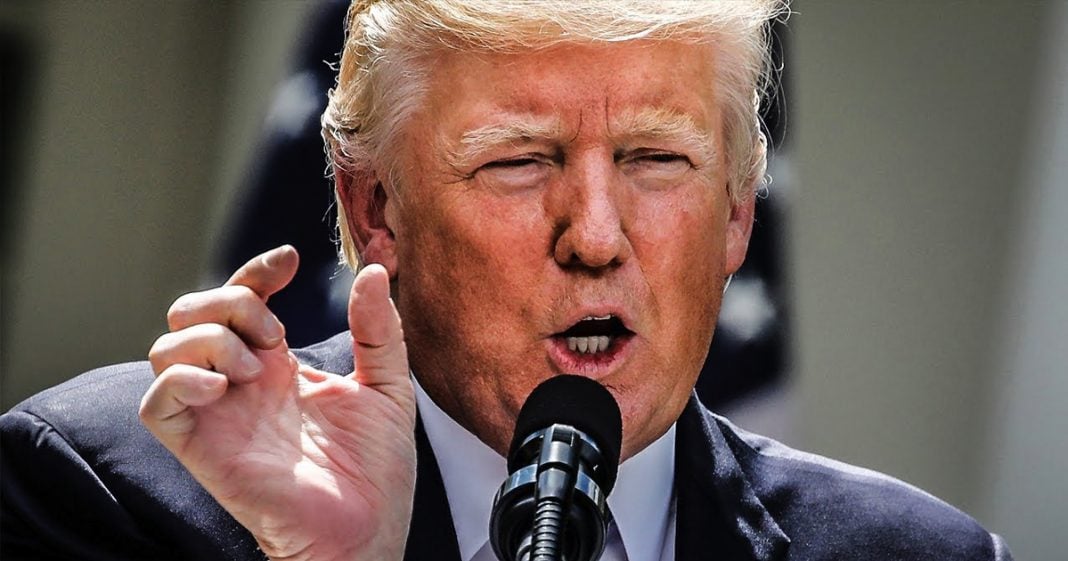 As the Russia probe continues to escalate, so too have Donald Trump’s legal bills. But fear not – the billionaire president is not paying for these bills out of his own pocket. Instead, he’s decided that he’ll just use money from his campaign and money from the Republican National Committee to pay for his lawyers. Ring of Fire’s Farron Cousins discusses this.

According to a new Reuter’s report, Donald Trump has used more than $230,000 from both his presidential campaign and the Republican National Committee campaign in order to pay for is legal bills that are continuing to increase as the probe into the Russia connections of his campaign continues to go even further. Now, technically, using these campaign funds that people donate to both Trump and the RNC to help get people elected, using those funds to pay for your legal bills is not technically illegal, because Donald Trump did not rely on any public financing to fund his campaign, neither did the RNC for this particular instance. Yeah, the can absolutely take that money that people gave to them to go elect other republicans and use it to defend Donal Trump from a probe that will ultimately end up costing him his entire presidency.

The difference in this is that when Bill Clinton was under investigation for the White Water thing, whatever you want to call it, he did not use campaign funds, because he did get public financing for his campaigns. He used his personal insurance, his personal money, and some of his donors did set up legal defense funds, but he still came out millions of dollars in debt fighting off all of those legal fees.

Again, Trump doing this, not illegal, but he is a man who cam into office swearing up and down that he was a billionaire. Now, if you’re a billionaire, I would think that spending $230 to keep yourself out of prison is a small price to pay considering the reward that you get from it. Donal Trump being such a cheapskate and probably lying about his actual net worth, feels the needs to take money basically from his own supporters in order to keep himself out of prison.

Now me, personally, I love this story. I love the fact that Donald Trump is draining his own presidential election funds and the RNC’s money in order to pay for his legal bills, because it’s going to result in less money that the committee has to spend on republican candidates all over the country. The RNC did say that this money’s actually coming out of a separate fund. It’s not going to change how much they have to have that they can spend on candidates, but then when they were pressed further, their response was, “It’s none of your business how we’re paying for those bills.” I don’t believe the RNC when they say that they still have plenty of money and that they’re not touching the re-election money, because the next sentence out of their mouths was “That’s none of your business.”

It is likely and probable that Donald Trump is draining the RNC for his legal defense. To me, that’s just one of the best parts of this story. Not only is Donald Trump getting dragged through the mud in this in an investigation that, again, will likely end his presidency, but he’s also draining the RNC of their resources to elect other republicans throughout the country and possibly even put up another republican to replace Trump and Pence if they get kicked out of office.

This story is one of the best ones we’ve seen in a long time from the Trump administration, because it shows why this party probably should have thought twice before they put up a greedy shyster as their presidential candidate. He is doing to them exactly what many people predicted he would do to them.