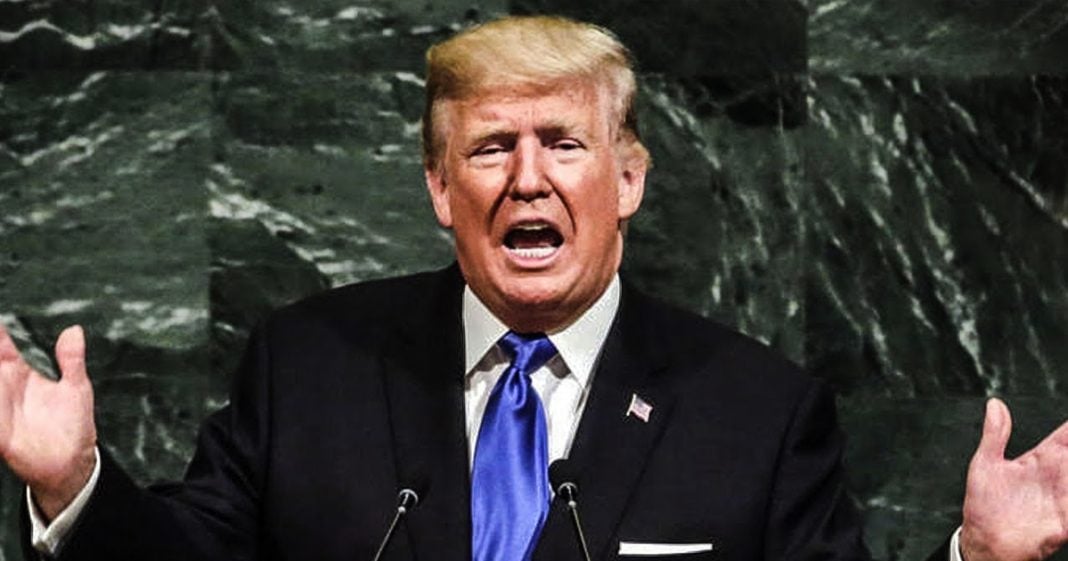 Donald Trump has now spoken twice this week in front of a UN assembly, and both times he managed to make a complete jackass of himself and the United States. Between bragging about his hotels and threatening to decimate North Korea, he was being laughed at backstage by world leaders. Ring of Fire’s Farron Cousins explains how Donald Trump once again proved that he is not a leader.

Earlier this week Donald Trump made two separate appearances before the United Nations, the first of his presidency. And both times, he managed to completely embarrass not only himself, but the entire country of the United States. To the point where his Chief of Staff John Kelly actually gave us one of the most epic facepalms of the Trump presidency so far. And that facepalm came as a result of this statement that Donald Trump made on day two of his speech to the UN.

Donald Trump: The United States has great strength and patience, but if it is forced to defend itself or it’s allies, we will have no choice but to totally destroy North Korea. Rocket Man is on a suicide mission for himself and for his regime.

Now, what’s interesting about that quote is that I don’t know for sure if he’s referring to Kim Jong Un as Rocket Man or if he’s actually talking about himself as Rocket Man, because based on that statement, both would fit.

But you can’t, for the love of God, you can not threaten to wipe out basically 25 million political prisoners in their own country just because you have a beef with their psychotic leader, but that is what Donald Trump did in front of the United Nations.

And, keep in mind, 25 million people in North Korea do not have access to the internet, most of them live without electricity. They live at standards well below anything we would look at around the world and consider acceptable. They are political prisoners, not allowed to leave their country and not allowed to move up in their societal castes. And, Donald Trump has no problem killing them because of the actions of one crazed lunatic who happens to be running the country.

But, that was not the only horribly embarrassing thing Donald Trump did in front of the United Nations. On day one, he sat there and bragged about his Trump Hotel property that was right across the street from the United Nations, talking about how he saw such a great potential in this particular little area of real estate, as if anyone in that room actually cared.

And speaking of things in that room or things that the people in that room do not care about, there’s also the fact that Donald Trump spent a good amount of time on day two bragging about things like how great the economy has done in the United States since his election. He bragged about the alleged job growth, that he’s taking credit for that actually occurred under President Obama’s budget. He’s bragging about unemployment, he’s bragging about the military budget we just passed, bragging about everything and once again, nobody in that room cared, because it didn’t have any effect whatsoever on anything that they were talking about or anything that they care about in their daily lives when it comes to running their own countries.

The other thing that Trump did that actually drew laughs from the crowd, not with him but at him, was he took a couple of digs at socialism, saying how we’ve fought back against it and look how great we’re doing. And, of course, world leaders decided to laugh at that, because Donald Trump doesn’t have a basic understanding of how pretty much every other industrialized country in this world works.

As it turns out, a lot of other countries, in fact most of the ones we considered advanced, have some form of either socialized medicine or socialized higher education where the state, the country covers the cost of those things. Many other countries around this world, most of them actually, have some kind of socialist policies in place, because socialism isn’t looked at as a bad thing over there, because they don’t have an idiotic Republican party out there every day and the media trying to demonize something that provides goods and services that are necessary for their public, like we do here in the United States.

So there you have it folks, there is just a few of the things on the very long list of ways Donald Trump once again proved that not only is he not a leader, but that we shouldn’t trust him when he has to go up and talk to actual leaders from around the world.