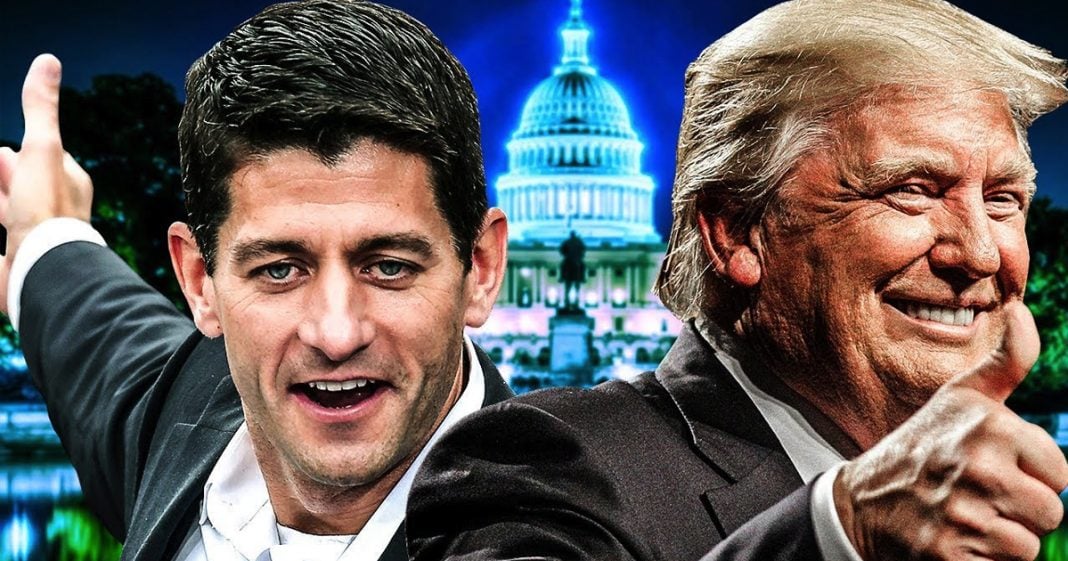 Due to a manipulation of Senate rules, Republicans have created a healthcare bill that will only be open for debate on the Senate floor for about 90 seconds – possibly as long as 2 minutes if things get crazy. This bill could strip more than 30 million of their health insurance coverage and destroy Medicaid, and the best the Republicans are willing to give us is 2 minutes. Ring of Fire’s Farron Cousins explains how this is possible.

Republicans at the US Senate are still working to pass their destructive healthcare bill, specifically the Graham-Cassidy Amendment that would not only repeal the Affordable Care Act, it would put in place a series of provisions that has been called Trumpcare 3.0. Now, you would think that such a huge piece of legislation would get a lot of time to debate. You would think that they would want people to talk about this bill, to understand this bill, to analyze it, and figure out what the hell it’s actually going to do to the American public.

And that is why Republicans have used this very specific rule to limit debate on this bill to 90 seconds. That’s right, this piece of legislation that has the potential to strip 32 million American citizens of their health insurance is going to be debated for 90 seconds, possibly as long as two minutes. It might get an extra 30 seconds in there if things get really crazy, but they do not have any longer than two minutes to talk about this bill. Why? Because they’re using this bill as part of the budget reconciliation act. It is not a necessarily a standalone piece of legislation, they’re tacking it into the budget. And unfortunately, time for debate on the budget has completely run out, so they only have two minutes according to their own rules to debate this bill and give the public the facts.

The problem is, most Republicans in the Senate, including those who actually support it, still don’t know what’s in the actual legislation. Vox did interviews with nine different Republican senators, and not a single one of them could accurately say what was in this legislation. The Democrats don’t know because they didn’t let them be part of the drafting process. There’s been no debate, so nobody brought this to anybody’s attention, but the fact of the matter is that Republicans are so desperate to repeal the Affordable Care Act, that they’re pushing a piece of legislation that has not been scored by the CBO, that they don’t even know what’s in, and they’re only going to allow us 90 seconds of a floor debate in the US Senate.

What we do know from the piece of legislation is that it would essentially end Medicaid as we know it. Medicaid would be gone. They’re going to roll back the Medicaid expansion, cut the funding for it, and then give the money for Medicaid to the states, at which point the states can either chose to spend that money on Medicaid, or anything else that they want. There’s no provision tying them to have to spend that money on Medicaid, thereby we can deduce, since Republicans seem to hate Medicaid, that they’re not going to spend it on there. 30 million children in the United States and half of all of the birth in these United States are covered by Medicaid. Suddenly, if this piece of legislation passes, 30 million children in the United States no longer have insurance. Half of the births in this country will no longer be covered by any form of insurance.

What is that going to do to our health? It’s going to result in more dead children. That’s the bottom line. That is the only way to put that. Children won’t be able to go to the doctor, they won’t be able to get medicine, half the people in this country might not be able to afford to go to a hospital to give birth. They’ll have to give birth at home or somewhere else, anywhere else. Turn to more dangerous practices in order to give birth that aren’t going to give their children the proper care that they need right after they are born. People will die because of this Republican bill. These idiotic Republican senators don’t even know what’s in the legislation, and yet they’re rushing to ram this down our throats, because they hate President Obama. That is the bottom line here. They want to kill children because they hate Obama.