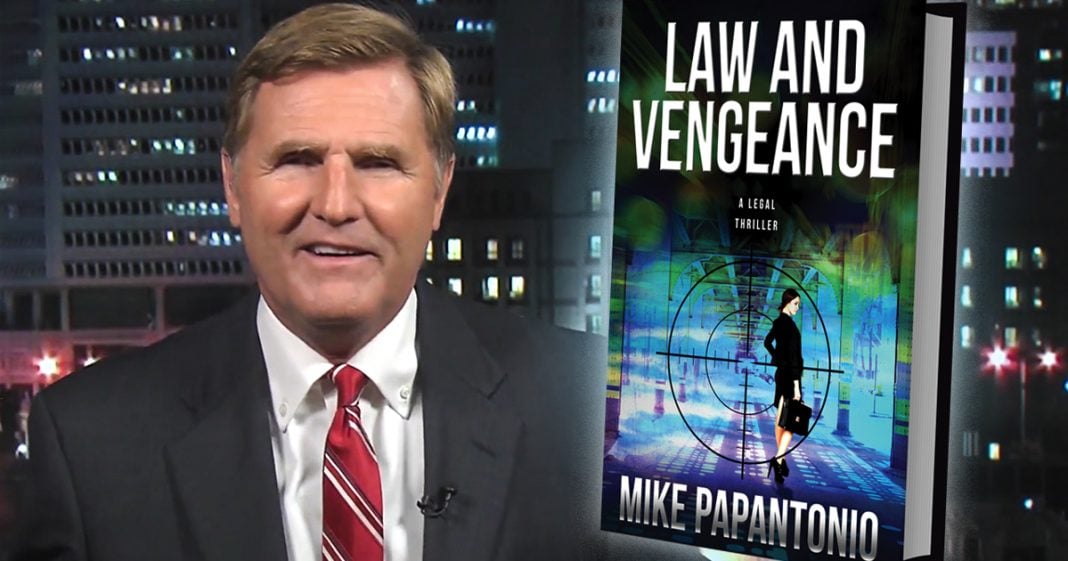 Via Rt America: Mike Papantonio, host of America’s Lawyer, joins Lee Camp to speak about Papantonio’s new legal thriller, “Law and Vengeance.” The book is a great display of character development while also thoroughly researched and informative, which is unsurprising given Papantonio’s long record of exposing corruption in corporate legal cases as a trial lawyer.

Order your copy of “Law and Vengeance” here: LawAndVengeanceBook.com

Lee Camp: Speaking of corporate crime and white collar crime, that’s pretty much what your new book deals with. Law and Vengeance, which is getting great reviews. What did you draw from to write this new thriller? Is it experiences from your own cases?

Mike Papantonio: Yeah. Just like the first book I came out with, Law and Disorder, it’s a series of books. They’ll be four in a series. This book is based on real world themes. White collar criminals in the United States have been operating under this Wild West mentality where they can lie, they can cheat, they can steal their way to financial success while never having to worry about the possibility of going to prison. That’s one of the themes that’s pivotal in Law and Vengeance.

But in the United States, we’ve had this way that even though we don’t prosecute white collar criminals, we’ve had a way of going after them through what we call false claims acts or whistleblower cases. One of the themes in the book is that these men and women who risk everything to expose the wrongdoing of a corporation or government, they’re actually more likely, interestingly enough, to be prosecuted and put in jail than the people that they expose.

This story centers around an actual case we handled here right in the firm. Actually, a couple of them. One is a gun sight that was so defective that when it’s actually out in heat, in humidity, it can be off two degrees for every hundred yards. So, it basically makes the gun unusable. It’s called a hologram. You’re supposed to point it, pull the trigger, and you’re supposed to hit your target. It works great if it’s air conditioned.

Lee Camp: There’s no heat and humidity in Afghanistan. So, nothing to worry about there.

Mike Papantonio: No, exactly. Yeah. That’s where it actually became discovered. You had police officers that were mandated to use this piece of junk and the manufacturer knew of the problem, kept it on the market anyway, even though. In the process, taxpayers paid millions of dollars to buy this piece of junk. So, that’s pretty typical in a whistleblower case.

Then also in this case, we find that the whistleblower is victimized. It’s not this, they’re going after him to upset him. They’re going after to kill him. Many of those tragedies involved in the book involved people trying to protect that whistleblower. I’d love to say that that’s just farfetched, but it’s not. It’s every day in America, unfortunately.

We really do believe that we have our finger on the pulse of how criminal corporate America has become or international manufacturers and corporations have become. We think we have our finger on the pulse. But until you follow these stories as a trial lawyer every day, you don’t get a sense of really how bad it’s become. That’s one of the themes in the case in the book. It centers around a female trial lawyer, Lee, that I think you’ll find interesting.

Mike Papantonio: The Department of Justice in this case, we listened to Obama talk about how he was going to be there for all these whistleblowers. In the end, the truth is he wasn’t there for any of them. In fact, he had more whistleblowers prosecuted than three presidents before him combined. So, the truth is whistleblowers actually are sometimes the last line in defense to the level of fraud that’s taken place in this country that is numbing. It’s just become so bad.

So, the whole book is built around that. It’s a series of books. The next book that comes out is built around the opioid crisis that’s killing so many Americans, as you pointed out. The opioid crisis is going to be the major theme of the third book. Then the fourth book deals with the international banks that are actually washing money for terrorists and actually enabling many of these terrorist cells all over the world to stay in business. You might remember, I think it was nine of the banks in Europe pled guilty to actually washing money for terrorism. That’ll be one of the themes in the fourth book.