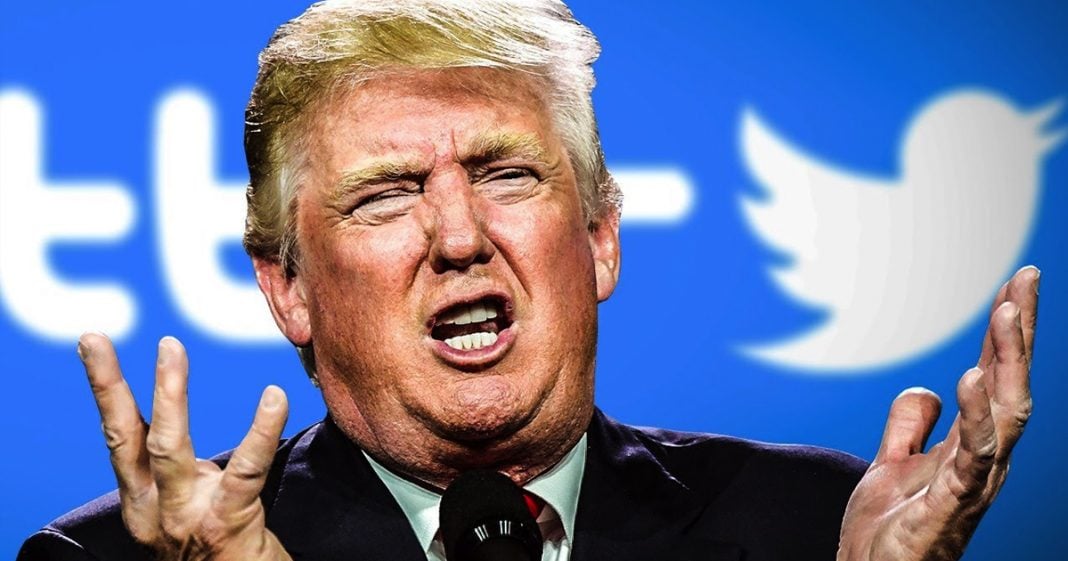 Donald Trump loves Twitter, but he also apparently loves to retweet fake accounts that have been set up to promote his presidency. Once again, it looks like the President has been retweeting fake Twitter bots in an attempt to show how much people love and support him. Ring of Fire’s Farron Cousins explains why this isn’t as harmless as it may seem.

By now I’m sure most people are familiar with the fact that over the weekend Donald Trump retweeted a gif that showed him hitting a golf ball and then that golf ball was super imposed onto another gif of Hilary Clinton falling down. Yada yada yada. It was a disgusting act by the president. Now the account that originally tweeted out that gif is not the account that actually created it. That has been tracked to another Twitter account called team_Trump45. According to analysis that account might actually be yet another Twitter bot showing that Donald Trump is being consistently manipulated by bots on Twitter.

As most people recall back in August Donald Trump kind of penned Shawn I guess for retweeting many accounts that were later proven to be completely fake using fake photos and fake names and fake back stories of people. It turns out they were actually just fronts to help sell merchandise they were putting out on behalf of Donald Trump. They were not associated with the Trump Campaign, they made their own merchandise and they were trying to sell it. The case of this team_Trump45 Twitter account though is that this person really hasn’t tweeted until Donald Trump became president and the majority of their tweets just happen to be pictures or gifs or other non-verbal things that are being created and sent out to the masses.

Now, this isn’t necessarily harmful per se. You know there’s not anything that says that Donald Trump can’t retweet a bot but what it’s doing is showing some of these groups that are creating these bots that they can pass the touring test, which is what is used to determine whether or not artificial intelligence can effectively fool human beings into believing that it is in itself a human as well. This does have very specific scientific ramifications when the president of the United States can’t tell the difference between a human being an automated Twitter bot but clearly he can’t tell the difference because he continues to tweet at them and support them and even thank them on Twitter not realizing that it’s not an actual human being sitting at a keyboard.

Again, other Twitter analysis have shown us that as many as half of Donald Trump’s total followers on Twitter are either fake accounts, bots or what they call semi automated bots, which are sometimes run by a person, most of the time they’re run on an automated system to automatically reply and retweet anything that Donald Trump says. Now for the most part we do not know where these bots are coming from, where they’re originating. Some have obviously been through here in the United States, other could very well be overseas but their purpose is clear. They want to show Donald Trump exactly what he wants and that is that people love him, even though they clearly don’t.

I mean the guy goes to Twitter looking for validation when instead he should be paying more attention to public opinion polls that show that almost half of Americans at this point are ready to impeach him and his approval rating is still hovering somewhere in the 30’s. People do not like you, Donald Trump. As long as there are Twitter bots out there that are programmed to tell him how great he is he’s going to continue to think that he’s doing a good job and he’s going to continue along this same path. There is some very real damage that can be caused by these bots and it’s not just proving that our president is a moron. It’s giving him a false sense of accomplishment, a false sense of love from the American public that’s only going to further push him to pursue his destructive and dangerous agenda.