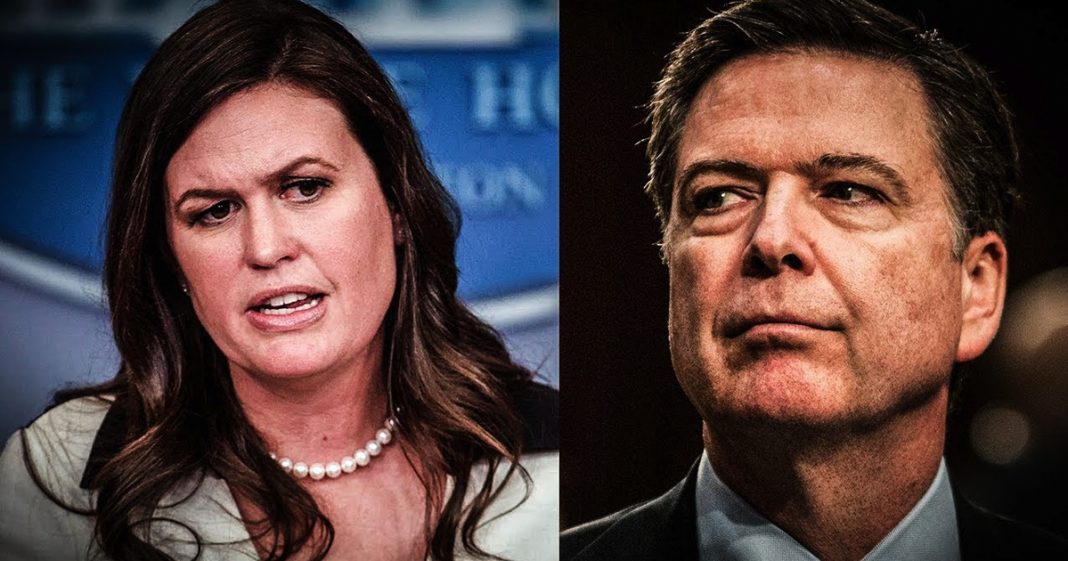 According to Democratic Senator Sheldon Whitehouse, White House Press Secretary Sarah Huckabee Sanders could face a potential indictment for obstruction of justice over her brazen allegations last week that James Comey should be investigated by the Justice Department for his actions against Donald Trump. This could easily be seen as intimidation, as Whitehouse points out, and Ring of Fire’s Farron Cousins explains how the Trump campaign is trying to do anything possible at this point to smear Comey in an attempt to thwart the ongoing investigation.

Democratic senator Sheldon Whitehouse paid attention to this and he’s now come out and said, and keep in mind he’s the ranking democrat on the senate judiciary committee, he says that Huckabee Sanders herself at this point, for threatening James Comey, could possibly be looking at some kind of obstruction of justice charge against her because if this is perceived as a threat against James Comey, it could be a way to interfere with the grand jury investigation currently taking place, and could be her attempt to sway the grand jury by smearing James Comey.

Now in the last few weeks, and to be honest really in the past few months, we have seen a lot of people from the Trump administration try to smear James Comey and show that he’s some kind of partisan hack, even though a year ago we were talking about him being a Republican hack, and now they say he’s a democratic hack. I think he’s just a guy doing his job. He’s made quite a few mistakes, but in terms of the leak, I do not think that this was anything other than trying to get the information out there, covering his own ass by keeping records of the communications he has with Donald Trump, and in no way is this anything that’s prosecutable. For Huckabee Sanders to even suggest that does show that one, she’s still trying to smear Comey’s name, and drag him down so the public has less faith in him. Number two, that she might very well be trying to influence the outcome of the current investigation which is exactly what Senator Sheldon Whitehouse asserted on MSNBC this week.

Now, no charges have formally been filed against Huckabee Sanders, but that doesn’t mean that they couldn’t come, and it doesn’t mean that her comments about Comey might not get her wrapped into the Mueller investigation herself. My advice to people within the White House, and I’ve had to say this many times in recent months, stop talking. Don’t talk about the investigation, we saw what happened over the weekend when Trump’s lawyers were literally talking about it very loudly on the street. How about you just keep those conversations behind closed doors, because every time you guys get in front of a camera, or in front of a crowd, or even on a street corner, you only seem to be making more problems for yourselves.

It doesn’t have to be this way. I mean it’s not going to change the outcome of the investigation, but at least it would show that maybe somebody within this administration has a little bit of competence and isn’t such a bumbling idiot when it comes to not incriminating themselves or committing further crimes like obstruction of justice.