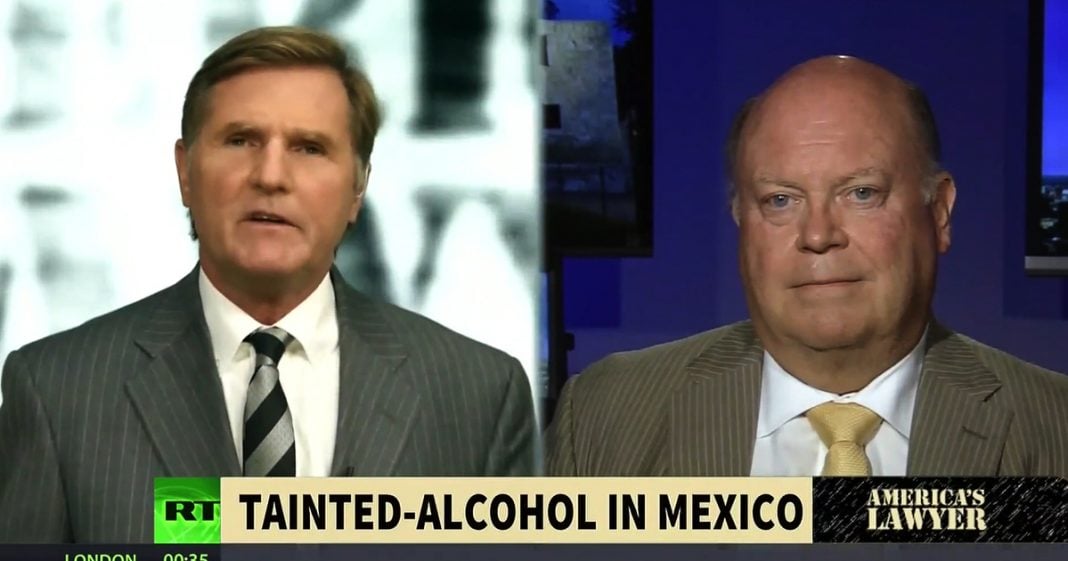 Via America’s Lawyer: Mike Papantonio discusses how there are growing dangers for tourists lurking in Mexico – dangers that have been linked to at least one American death with attorney, Tim Maloney.

Mike Papantonio: Mexico plays host to roughly 35 million tourists from around the world every year, and most of them come from the United States. Tourism for the country brings in more than $13 billion dollars per year, making it a vital part of the Mexican economy.

In January of this year, a family from Wisconsin took a winter vacation down in Cancun, Mexico, where the family of four was hoping to enjoy warm temperatures, beautiful beaches, and have a few drinks by the pool. The parents and their two children – a 22 year old son and a 20 year old daughter – stayed at a well-respected and highly-recommended resort. They had no reason to suspect that they would leave the country as a family of three, but that’s exactly what happened.

During the trip, the two children decided to have a few drinks in the hotel while their parents got ready for dinner. Not long after they finished their drinks, the two were found around the pool, completely blacked out – the daughter, Abbey Connor, was face-down in the pool. The pair were immediately rushed to the hospital, where Abbey awoke but ultimately died a few days later.

People might be quick to blame the victim here – Maybe she drank too much and couldn’t control herself – but that’s not what happened. It was revealed that the alcohol that Abbey and her brother had been drinking was counterfeit. It had been made primarily with ethanol, a common ingredient in both rubbing alcohol and paint thinners.

After Abbey’s story went public, countless other American tourists came forward to reveal that they, too, had blacked out after ingesting small amounts of alcohol while visiting resorts in Mexico. More than 1.4 million gallons of tainted alcohol has been seized in Mexico since 2010. Some of the counterfeit alcohol is said to contain pure industrial ethanol — again, that is an ingredient used in many rubbing alcohols.

The problem of counterfeit alcohol has gotten so bad that the U.S. State Department had to issue a travel advisory, warning American citizens about the dangers of consuming alcohol while vacationing in Mexico. Mexican authorities have promised a crackdown on purveyors of this poison that is being served to tourists, but so far the problem doesn’t look like its going to resolve anytime soon.

For more on this story I have attorney Tim Maloney who’s representing the family of Abbey Connor. Tim, let’s start by going over Abbey’s death. Tell us what we know so far about what happened when her and her brother went down to the bar. What’s the story here?

Tim Maloney: Pap, good talking to you. Well we’ve got … I actually do represent Abbey’s dad Bill in this litigation. What we have is this. We had a … Nice folks. Came down to Playa del Carmen and stayed at the Iberostar Resort. What we do know is that prior to a 7 o’clock dinner Abbey and her brother, Austin, went by the pool. They have a swim-up pool, which most of the resorts do, and started enjoying themselves. They had a couple drinks. They were doing shots that the bartender poured, and they probably had two or three shots. Here’s where the story gets very convoluted in this regard. Austin really almost had a complete blackout. Doesn’t really remember anything and does remember literally waking up after hospitalization. That’s how difficult it was.

Abbey was found face down in the pool. Resuscitation efforts were unsuccessful to the extent that she did go into a coma, was taken to the hospital. There has been some investigation done. There was a report done by the authorities down there. The truth of it it’s … We have some very unsatisfactory answers. The strangest issue we have in this is that you have two young kids. One 20, one 22. College kids from Wisconsin who clearly have been around drinking alcohol before in their lives, that almost simultaneously blackout and wind up in the pool. It would be-.

Mike Papantonio: Yeah, Tim, let me ask you this. What has been the reaction of authorities? I mean look, this story is not something where you’re going to blame it on the kids. I mean that’s ridiculous. This is not the only time this has happened. I’m wondering … The authorities, of course, they want their $13 billion, how many billions a year, $1.3 billion a year, whatever it is in tourism coming in every year. Are they trying to soft pedal this and say, ‘Ah gee. This is just isolated. It doesn’t happen very often?’ It seems like when we’ve seen these stories in the past, you’ve got the authorities always trying to protect the hotel and the business. In this situation, a lot of these big resorts in Mexico are originating in Spain. I mean Spain has some of the biggest resorts in Mexico, so you’ve got the authorities always trying to protect the man, so to speak, in these big resorts. What’s been happening here?

Tim Maloney: You’ve hit it pretty well. You know you’re talking about one of the, I guess one of the two largest income producers in Mexico is tourism. When you look at the area, it’s called the Pacific Riviera when you go down there. It is nothing but these all-inclusive large resorts. What the authorities are saying, two kids got drunk, fell into a pool and drowned. That is going to be their position. That is the position they’ve taken. Tragic accidents. Sorry about it, but what are we supposed to do? Two college kids got down here drunk. They fell into a pool and it’s on them. The absurdity of the arguments are obvious.

Mike Papantonio: In this case that doesn’t really even work because the time would not allow them to get that drunk, between the time they left their parents and the time they were found. It just a ridiculous story. I guess the thing that’s got to be most frustrating to you is you have a government there that’s doing everything they can to protect tourism. You know first of all, people are afraid to travel down there because the drug cabals, that’s part of the problem. Now you add this to it. There’s the story about the deals where the hospitals have some kind of deal worked out with thugs that are … There’s all kinds of things going on down there. What ends up happening is you’ve got the government that’s trying to protect their money. Here you’ve got a family loss of life in this child and it’s going to be very difficult thing for you to get anybody to do anything about it is my bet.

Let me ask you this. What kind of chemicals are being found in the alcohol? I mean it’s not, it’s pretty apparent that it’s not just alcohol is it?

Tim Maloney: Yeah. Pap, there’s actually, believe it or not, a very healthy industry of people who buy the empty bottles, who buy the empty bottles of legitimate booze and then refill and then turn around and resell. Some of the chemicals, there has been as grotesque as paint thinner with tequila flavoring. Methanol. There has been grain alcohol found. Again, one of the things I want to explain to you about the exclusive resort thing, is that the economics of it, if you think about it, when you’ve got four or five thousand people thinking they’re all drinking premium liquor, you’re not going to stay in business too long. In other words, what has to happen for them to make these places work, is they’ve got to sub it out. What happens is, people again are think they’re ordering, oh I don’t know, a shot of Patron, and what they’re getting is what some guy made in his garage and they stuck into a bottle.

The difficulty, I do a lot of work in Mexico. I’m from Texas. I go down to Mexico a lot. I’m a fan of Mexico. I like the country, but what happens is, you pointed out correctly, like the Iberostar is owned by a billionaire out of Spain. He owns 100%, owns resorts across the world. When you have that, when you have a five star resort like this, what they’re calling a five star resort, when you have that much economic pressure on you that you have to cut corners somewhere. The two things they’re going to cut is food and beverage. That is the number one money maker. It is also can be your number one money loser. The drugs that are found in there, we are at the mercy of what we’re getting from the authorities down there. We’re at the mercy of what they said the blood alcohol content was for these two young kids.

Mike Papantonio: Isn’t that part of the problem? I mean it’s not just one entity trying to protect the best interests of Mexican tourism. You know you’re going to have the police trying to protect that tourism industry. You’re going to have even the hospitals trying to protect that tourism industry. In the meantime, you’ve got Americans going down there, staying at say, the finest resorts down there. I mean, you know, I don’t even think you could … If you went to the Ritz Carlton down there in Cancun, don’t you run the same risk with some cat made the stuff in his garage? The Ritz Carlton may not know what they’re serving, but they serve it anyway.

No I think they know exactly what they’re buying. I think they know exactly what’s being put behind their bar. Hell if they don’t, they sure as hell should know. The idea being that, ‘Oh well, you know, a guy delivered it in the truck,’ well you know you do have tax stamps. You do have seals. You can certainly tell legitimate from not legitimate. It’s why these people are professionals. It’s what they do all over the world. To suggest that, ‘Oh we didn’t know some guy put paint thinner in our tequila,’ I’m sorry that’s just not going to fly.

Mike Papantonio: Really what I hear you saying is that the hotel itself has a huge responsibility. I mean they can’t just put it off and say, Gee, we had no way of knowing. You know, putting them on notice, but they’re on notice. Being on notice that something’s happening that shouldn’t be happening, now they have a higher standard of care. They need to figure this out because it will absolutely devastate the tourism business down there. If the government were smart, rather than trying to play along with this, they would terrorize. They would absolutely terrorize the folks that are behind this.

Tim, thanks for joining me. Good luck with your case down there. It’s a very, very important one.