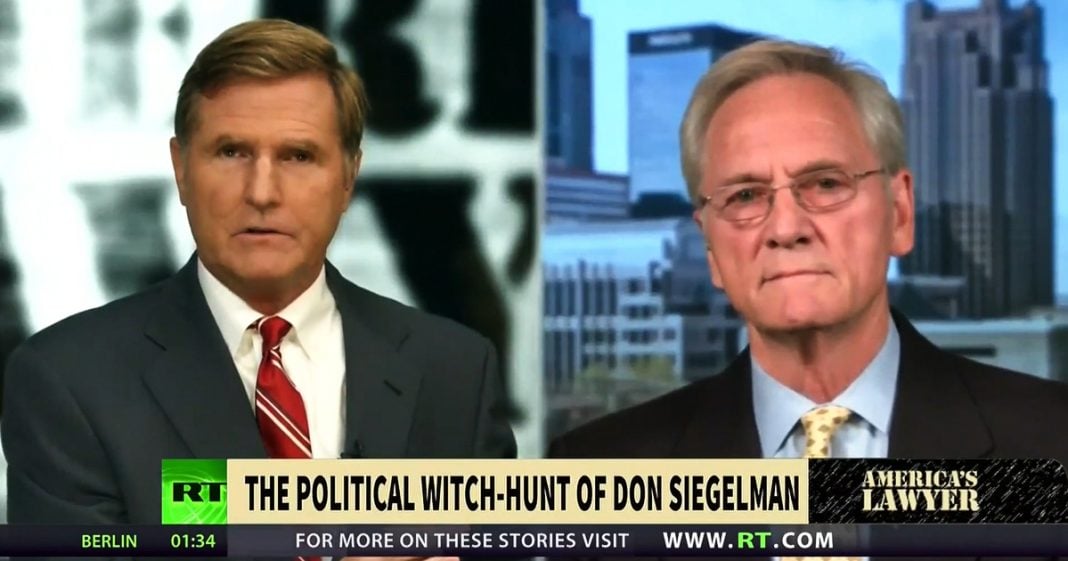 Via America’s Lawyer: Mike Papantonio discusses how one of the more well-known instances of politicians using the justice system to achieve their own ends was the prosecution of former Alabama governor Don Siegelman. Mike is then joined by former governor Siegelman, to give some details about what led to his incarceration.

Mike Papantonio: Don Siegelman was sworn in as the Governor of Alabama in January of 1999. And from the start of his term, his Republican opponents set out to take him down, by any means necessary. Siegelman, a Democrat in a very red state, drew the ire of Republicans in Alabama, so they turned to dirty tricks master Karl Rove; the architect behind George W. Bush’s entire presidency. Rove and the Republican operatives came up with a plan to have Siegelman investigated for alleged bribery after he appointed a campaign donor named Richard Scrushy to a position on a state hospital board – A position that Scrushy had already held under several Republican governors.

From the very beginning, it was obvious that these charges would never stick. But Rove and his associates managed to find just the right prosecutor, just the right judge, and even a jury that eventually convicted Siegelman and sent him to prison. There have been countless investigative pieces since Siegelman’s prosecution that show Karl Rove’s involvement; How the charges were trumped up; How the prosecutor was working with state Republican operatives to prosecute Siegelman; And even about how the prosecutors made potentially illegal contact with jury members during the trial – something that would get a typical prosecutor or lawyer in very serious trouble, maybe even prosecuted.

Don Siegelman was targeted because Republicans knew that they could use our corrupt justice system to serve their own ends. And even today, more and more information is coming out that points to Siegelman’s innocence, while the people who actually committed crimes by targeting Governor Siegelman never once, not one time, saw the inside of a prison cell… where they actually belong.

Joining me now to tell the story in his own words is former Alabama Governor Don Siegelman. Governor, there’s a new film out, Atticus versus The Architect, that tells the story of the plot against you. What the new evidence does, it brings forward in this film, it’s a whole new light that people did not even know about. Talk about that film a little bit.

Don Siegleman: Well, there … the documentary hits the prosecution, of course Rove and others, pretty hard. But the new evidence that is presented in the documentary is explosive. One, Jack Abramoff makes a cameo appearance and readily admits to his part in the conspiracy to stop Siegelman by any means necessary, to use your words. But, he also says that they spent up to 20 million dollars in Indian casino money from the Mississippi Choctaw Indians, because they wanted to protect their economic monopoly in the southeast.

He sets up, almost the perfect civil rico case against those involved, who conspired in the prosecution and those who financed it … the Mississippi Choctaw Indian casino owners.

Don Siegleman: Oh, yeah. And, you know, Abramoff and Ralph Reed and Grover Norquist were all part of the … part of Rove’s group in the young republicans, the college republicans. So they’d been together a long time and all of them were involved in funneling, laundering, illegally, 20 million dollars of Indian casino money, into the state to defeat me in 2002.

The second revelation is from a republican lawyer, who was a member of the republican national committee. Tommy Gallion goes on air, in the documentary, and says that he was summoned by the Republican party chairman to a meeting where it was discussed how they were going to use the Department of Justice to prosecute me in the middle of the election, to ensure that I wasn’t elected.

Mike Papantonio: Let me interrupt you right now. Okay, first of all. We have this sense that the Department of Justice is out there to protect us. That they’re going to do the right thing. We’ve just come, for an example, through a Department of Justice that let Wall Street crooks steal millions, billions, trillions of dollars from the American public and not one of them in the burn down of 2008, went to prison.

Now, let me ask you this. One of the more disturbing parts of your prosecution was that there’s evidence that prosecutors had been actually in contact with the jury during the trial. I mean, in ordinary circumstances, that kind of behavior’s going to put people in jail. That went on with your case, didn’t it.

Don Siegleman: It did. There were at least three incidences that have come to light. There’s no telling how many did not come to light, where the prosecution had direct contact or had an intermediary contact members of the jury. So, but, you know, as disturbing as that is, the cover up by the judge and the prosecutors, made it worse.

They didn’t come forward and tell us about these contacts, illegal contacts with the jurors, we had to find that out through a whistleblower who was promptly fired, a Department of Justice paralegal, Tamara Grimes, came forward and produced evidence of all kinds of government misconduct, including their brow beating, coaching, and pressuring a witness to lie on the stand. And, she was immediately fired, under Eric Holder’s direction.

So it is troubling. Also troubling …

Mike Papantonio: Let me ask you this.

Mike Papantonio: Whatever happened to that judge that was involved? What was the wrap on that judge?

Don Siegleman: Well, the judge should be in prison because he was found to have committed perjury, lying to federal investigators, lying to prosecutors, a magistrate over in Atlanta, and lying to the 11th circuit court of appeals about having severely beaten his wife, pulling her, kicking her, punching her, at least eight times. But, nothing was done to the judge. He was allowed to retire, walk away from the bench and …

Mike Papantonio: Okay. But this is who they chose … this is … the guy was … let me get this right. First of all, he had to resign as federal judge, he wasn’t prosecuted for beating his wife almost to death, he has all types of barnacles hanging all over him. This is the judge that the prosecutor … is just as interesting of a character, chooses to try your case in front of. And the Department of Justice, the people that rather the … you know, same people that let all the Wall Street criminals get away with stealing eight trillion dollars from the American public. That Department of Justice comes in and they’re participating in all of that.

And while we’re talking about problematic communication, evidence. Evidence suggested the prosecutor in this case was giving trial updates to your opponent, during your governor’s race. Is that correct? In other words, you’re running for governor and this freak of a prosecutor, this … apparently talking to the jury at the same time, is actually giving updates to your opponent, while you’re running for governor. Did I get that right?

Don Siegleman: You got it right. But it’s only … you know, the … again, the worst part is that the Department of Justice, to this very day, has sealed those communications, those emails that were being sent, by the lead prosecutor in my case, to my Republican opponent, giving him updates on the status of the investigation. And expressing frustration that it wasn’t moving along fast enough. But, the Department of Justice is hiding that information.

We have sued the Department of Justice twice. Once in 2006 and once a couple of years ago. We have a case, a freedom of information act case, now pending in the northern district, to hopefully shed some light on what has been going on. But, if they had given me this exculpatory information back when they had it, we could have filed a motion for a new trail, based on that information. But they have hid it, they’ve sealed it. They’ve concealed it. And they are still hiding it from me and from the public.

Mike Papantonio: Yeah, well, look. There’s got to be some recourse against this prosecutor. I would … you know, just … I’ve known you for years. Full disclosure. I’ve followed your career for a long time, Don. There’s no way that you can let this prosecutor get away. There’s no way you can just say, ‘Okay, I tried, we’re going to move on.’ Hopefully you’re not going to do that in this case. In light of all the evidence that was purely political prosecution …

Don Siegleman: What case, which is pending in the northern district of Alabama, will reveal enough new evidence to allow us to go forward, either with discovery or with a civil rico case against all these … this cast of characters and the deep money people over in Mississippi, the Choctaw Indians which provided the money to Karl Rove’s bag man, Jack Abramoff to, you know, to do me in. So, there’s a possible civil rico case pending, but, you know, we have to wait and see what the evidence produces.

Mike Papantonio: So the people who perpetuated this prosecution against you and all those connections to this prosecution, are they still in power today? I mean, you’ve got people like Jeff Sessions, Eric Holder … Jeff Sessions, now the AG. Eric Holder, you know, he’s moved on, back to his corporate defense firm, where all he does … his job is to protect wall street crooks. That’s what Eric Holder does. This guy who was in charge of the Department of Justice, that was supposed to be looking out for consumers, goes back to Covington Burling, goes to work with them. He’s now back at his job, making an awful lot of money. Not much downside to the people who victimize you, if I look at this right, Jeff… I mean, if I look at this right with what happened to Jeff Sessions and Eric Holder. Not much downside to them, is there?

Don Siegleman: Well, the other thing is that in 2007, when Karl Rove and George Bush’s 22 million emails were destroyed, it was Eric Holder’s law firm who defended Karl Rove and the republican national committee when Congress was trying to hold Karl Rove in contempt. So there’s a, you know … there’s a … of course, his firm was defending those Wall Street bankers at the same time.

Mike Papantonio: Yeah. Yeah. Don, I gotta go. Let’s … We’re going to continue, we’ll do a couple more shows on this. This story is startling by any standard. Thank you for joining me.