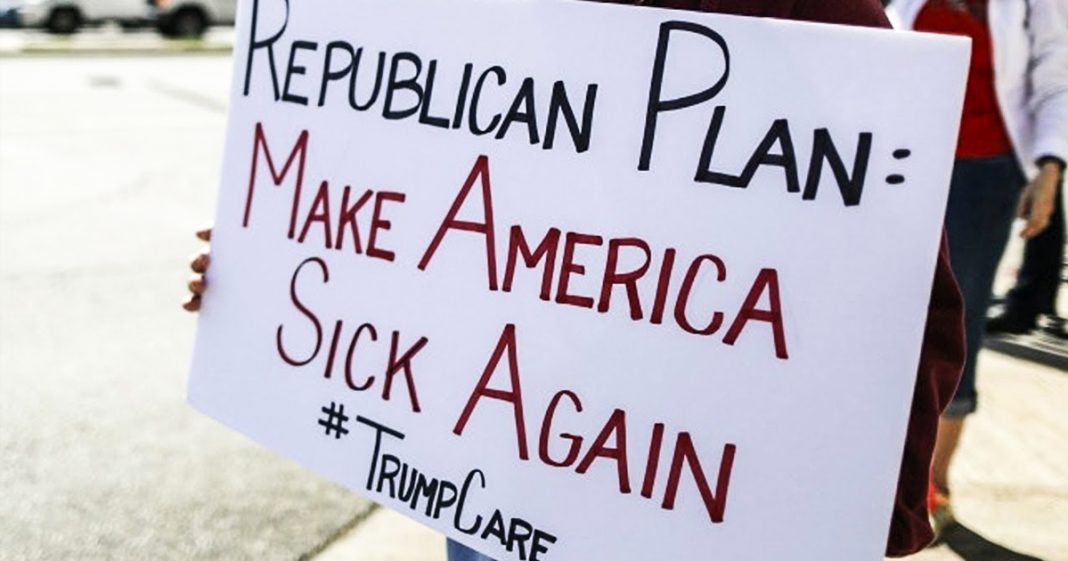 Senate Republicans claim that they are just one vote shy of having enough votes to pass their version of healthcare reform by way of a bill known as the Graham-Cassidy bill. This legislation would force millions off their health insurance plans and would even let insurance raise your rates if you get sick, even if your plan isn’t up for renewal yet. As Ring of Fire’s Farron Cousins explains, this is the most heartless version of healthcare reform that Republicans have proposed so far.

Late Friday afternoon it was announced that Republicans in the Senate had actually been working on a new version of their healthcare reform bill. This one knows as the Graham-Cassidy Bill. It was brought to most people’s attention by Democratic Senate leader Chuck Schumer Tweeting out that we have got to stop this thing and Republicans are very close to having enough votes to be able to actually pass it.

As of Monday morning it looks like, according to Republicans they’re only about one vote shy of having enough of a majority to get this thing passed. So, here’s what this horrible piece of legislation would actually do to people in the United States. First and foremast, analysis are showing us that as many thirty-two million people could lose their health insurance under this particular Republican version of the healthcare bill, effectively making it the most cruel version of healthcare reform that Republicans have proposed to date.

Cause keep in mind their first version was going to kick twenty-four million people off, the second version was going to kick twenty-two million off, but apparently they’ve said, “Screw it, let’s go big or go home.” Thirty-two million people right off the bat could lose their healthcare insurance. The reason for that is because they want to repeal all of the subsidies from the federal government to low income Americans that helped to pay for their health insurance. They’re going to reduce the Medicaid expansion, effectively taking that away from millions of people and even more grants and subsidies are going to some off the top that are going to make people not be able to afford health insurance.

But, one of the worst aspects of this particular bill is the fact that it will allow insurance companies to raise your rates if you get sick. And I’m not talking about when you go to renew your health insurance policy. This particular piece of legislation would give health insurance companies clearance to, if you went to the doctor and got a diagnosis of cancer, your rates would immediately go through the roof and there is nothing you could do about it. Which is ironic considering the fact that the whole reason Republicans say they want to get rid of Obamacare is because premiums are increasing ans their legislation literally allows health insurance companies to raise your rates whenever the hell they feel like it, which doesn’t solve any of the problems that we’re having with healthcare in this country.

Think about it this way. Right now we have Democrats and an independent in the U.S. Senate that are working to pass a Medicare for all piece of legislation that would give healthcare insurance, healthcare coverage or at least healthcare coverage access to everybody in this country. Republicans have proposed a piece of legislation that’s going to kick thirty-two million people off their health insurance plans and allow insurance companies to raise your rates whenever they feel like it. If you get a cold, your insurance rates could increase if you go to the doctor.

Now which one of those parties sounds like one that has the best interest of the American public at heart? Because it sure as hell isn’t the Republicans. If there are any people out there who voted Republican because they want Obamacare repealed, I suggest you start paying attention because clearly you haven’t been. Republican legislation, specifically this Republican legislation will result in the deaths of American citizens because Republicans are so damn greedy that all they care about are making sure we repeal those subsidies, give tax cuts to the wealthy and let their donors from the healthcare industry continue to reap massive profits while screwing over American consumers. That is the only thing that this legislation will do for the United States.