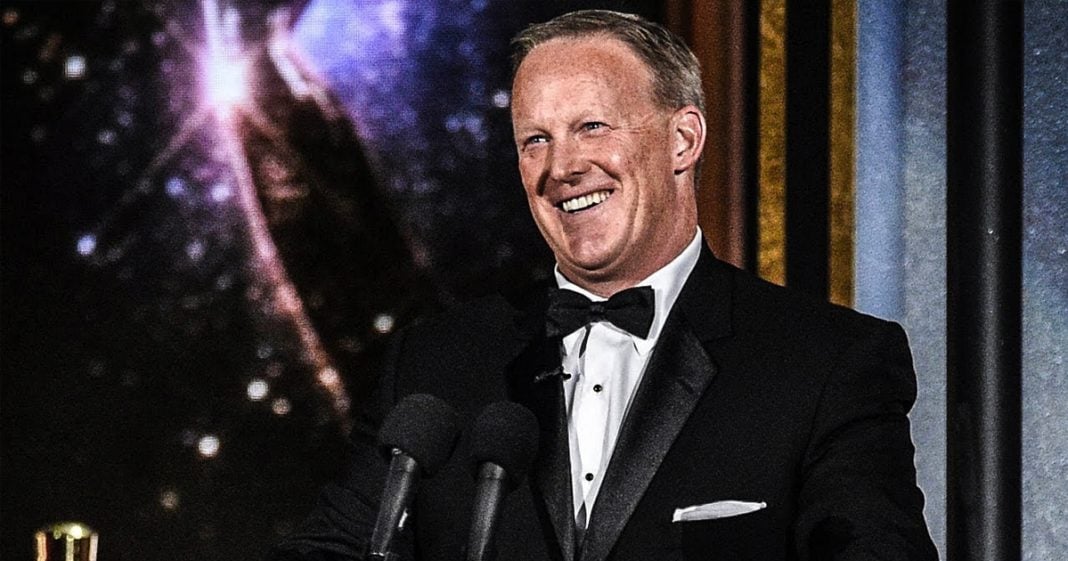 Sean Spicer made a surprise appearance at the Emmy Awards on Sunday night, and almost immediately the entire country forgot that he spent months lying to the American public on behalf of Donald Trump. We cannot normalize this kind of behavior or give him a free pass because he made us chuckle by spewing his rehearsed jokes. Ring of Fire’s Farron Cousins discusses this.

Sunday night was the Emmy Awards, hosted by late-night host Stephen Colbert, and during a monologue, Sean Spicer came out, rolling his SNL podium out there. Everybody erupted in cheers. Spicer began building off what Colbert had set up for him, which was a joke about how big the crowd was. Spicer built off that, you know, making fun of Trump with it, and everybody laughed and had a great time, and Sean Spicer is now this huge, great, funny, wonderful celebrity that everybody seems to have forgotten lied to us for about seven straight months on behalf of Donald Trump.

Last night’s appearance by Spicer at the Emmys was not humorous, it wasn’t funny, and it clearly wasn’t very well thought out. You don’t parade out a jackass who made a living lying to the American public on behalf of the least popular president in American history, come out there and tell well-rehearsed jokes just to get a laugh. There was nothing funny about Spicer’s appearance last night at the Emmys. There’s nothing funny about the fact that Harvard University’s now hired him as some kind of adjunct member of their faculty. Sean Spicer should not be normalized. His behavior as the White House Press Secretary should not be normalized.

And yet, here we are, and that’s what we have to talk about today: the fact that a man who consistently lied to the American public, lied to them about what the Republican health care plan would do, lied to them about tax reform, lied to them about crowd sizes, lied to them about Obama wiretapping Donald Trump, lied to us about every possible thing we could imagine, and now we’re supposed to think that he’s an okay guy because he’s not working for Donald Trump? Because he came out and told a couple of jokes that were written by other people who professionally write jokes? That’s not funny, folks. That’s not the kind of thing we need to do. These people like Sean Spicer need to be held accountable. We’re not going to lift them up on our shoulders just because he doesn’t work for Donald Trump anymore. That doesn’t excuse all of the damage he’s caused throughout this country when he worked for Trump.

It’s not as if Kim Jong-Un could step down as a dictator in North Korea and then suddenly become a comedian, and we say, “Well, we forgive him now. He’s stepped down, and he’s also pretty funny.” Not how it works. When you’re a horrible person, when you’re known for lying to the public, that’s not the kind of thing we should just dismiss because you went out and made fun of yourself for a few minutes on national TV. Donald Trump has done that, Rudy Giuliani has done that. That doesn’t make them good people. It just shows how well skilled they are when it comes to manipulating the public, because the media ate it up. They loved seeing Sean Spicer come out there, and he got all kinds of great, wonderful, positive press about it. He is assuming that we’re going to forget about all the horrible things he did in the Trump administration, and if we continue to normalize his behavior, we may as well pretend that he never got up in front of us and lied through his teeth about everything you could imagine, trying to normalize the behavior of this horrible president, and that’s exactly what we’re doing with Sean Spicer today.