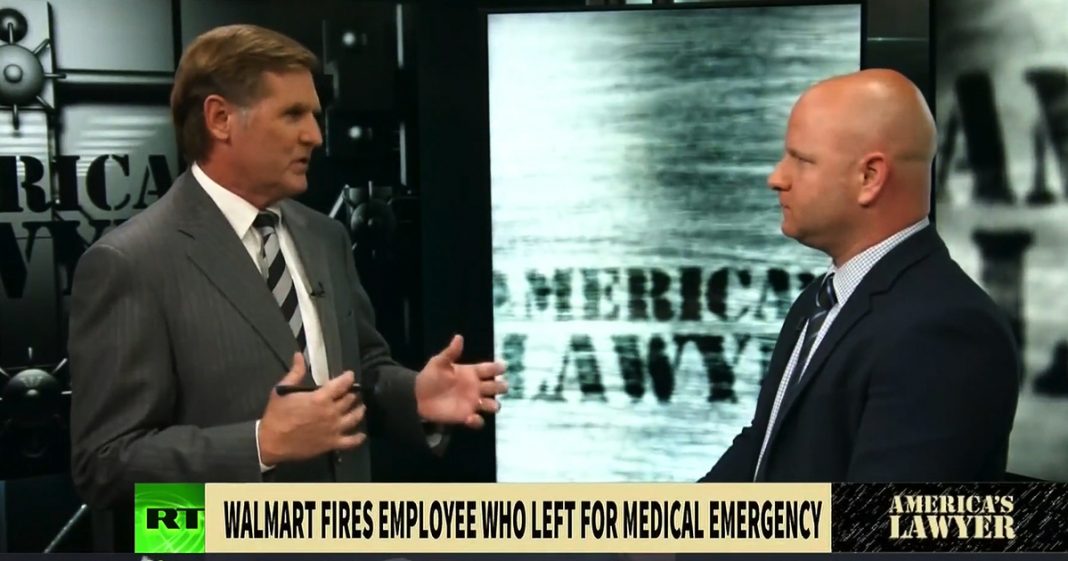 Via America’s Lawyer: Mike Papantonio is joined by Farron Cousins, Executive Editor for The Trial Lawyer Magazine, to discuss about a Walmart lawsuit for firing an employee who took a medical day off.

Mike Papantonio: Walmart fires an employee after the employee took emergency time off to resolve a medical complication with his son. Because of that, they are now facing a lawsuit that accuses them of a pattern and practice of terminating employees for taking necessary time off to attend to family emergencies. Joining me now to talk about this is Farron Cousins, executive editor of The Trial Lawyer magazine. Farron, what’s the story behind this lawsuit? It sounds like it could be a problem if it continues to grow.

Farron Cousins: Absolutely. Basically, we had this Walmart cashier, a man named Anthony Kelly in Tallahassee. Had to call in sick to Walmart because his son was throwing up blood. It wasn’t a runny nose. The son had a very serious illness. Takes him to the hospital. Anthony, as far as we’ve seen followed the procedure on how to call in sick and report that you were not coming in to work that day. He gets back to work. He goes two weeks. They don’t say anything. Then finally, one day, he can’t clock in, asked the higher ups what’s happening and they said, ‘Well, it’s because of that absence you had.’ It gets even worse because it was a legitimate medical excuse. He said, ‘I’ll provide you a doctors note if that will excuse it.’ Manager says, ‘Absolutely, do that.’ Comes back the next day with a doctors note. Manager still says, ‘Sorry. Can’t help you. You’re still fired.’

Mike Papantonio: Okay. Well, let me break this down. First of all, most states have a fire at will status. That means unless you have a contract, the company can fire at will. In this case, I think what this lawyer is going to find is if you look behind it, when the employee is hired, they’re told there are certain procedures we have in place as you point out for emergency situations. Here it is. You do A, B, and C. If you do A, B, and C, you’re in compliance with what the company is doing and then in this situation, we don’t know, but it sounds like he’s in compliance. The interesting thing is it happens two weeks later after he brings in a doctors note that says, ‘Yeah, this child might have died but for this.’ I’m interested in the notion of a pattern in practice.

We’ve seen this with Walmart before. There’s so many Walmarts. There’s so much commerce that takes place with Walmart that you start seeing patterns in practice. We had the case where they weren’t clocking … If an employee had the right to clock out, Walmart says, ‘No, you may not clock out even if you’re on a break. They had the employee actually working during the break, not being paid for it. That was a pattern in practice. We’re going to find this here?

Farron Cousins: I believe so. In fact, at the particular Walmart where Anthony worked, there’s already an instance of one employee being fired for something similar having to take time off for a family emergency. Then later on, after they had already fired that employee, they came back and reinstated him. It is something we’ve seen, stories that we have heard about from Walmarts all over this country. They’re not necessarily really adhering to FMLA laws, the Family Medical Leave Act. A lot of states are letting it go. They’re not doing anything on the federal side or the state side to help enforce these laws. That’s why lawsuits like this, like Mr. Kelly has filed is about all they have left to really get these laws that are in place actually used.

Mike Papantonio: What will happen on this is if there’s any ground gained in this, then other people are going to hear the story. Then all of a sudden, you start seeing this pattern in practice like we saw where Walmart had employees working during their punch out time and weren’t being paid to work, but they were having to work anyway. That was a pattern. It emerged the same way. It emerged with just a few employees coming forward and then the pattern in practice starts developing and you start seeing it happen all over the country. I think that’s what you’re trying to suggest here.

Farron Cousins: Absolutely. I think once this case really starts getting attention, the media starts paying attention, we’re going to see a lot more people come forward and say, ‘Wait a minute, what about me and my family and I lost my job because I had to care for my children.’

Mike Papantonio: My take is Walmart better get in front of this one.