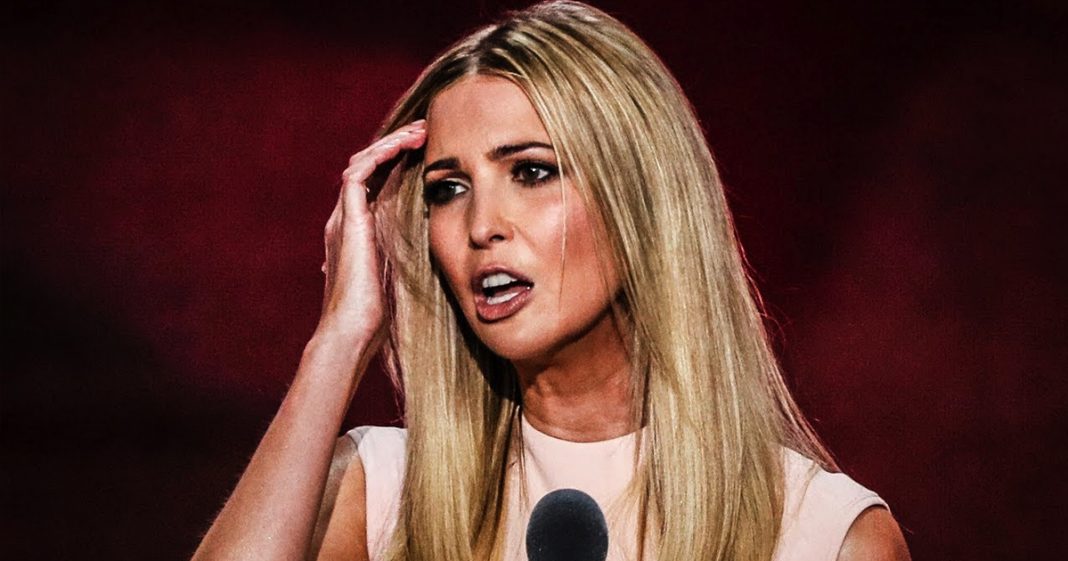 During a recent interview, Ivanka Trump finally admitted that she won’t be the savior that rational Americans had hoped she would be by saying that people have unrealistic expectations of her changing her father’s mind on certain issues. Ivanka promised to fight for the people, yet her father has trampled every talking point she threw out during the campaign. As Ring of Fire’s Farron Cousins explains, Ivanka is as big of a fraud as her father.

Ivanka Trump’s role within the White House still isn’t quite clear. We do know that recently she peeked in on a meeting, just to say, “Hi Daddy,” and then walked away as if that somehow contributed to anything or was any part of any important thing that was happening. But according to a recent interview that Ivanka gave with The Financial Times, she had finally admitted that she has basically, absolutely no sway over her father one way or another. In fact, she said it’s completely unrealistic for people to think that she would be able to change his mind. And that’s short of turning him into a Democrat, she’s always gonna be viewed as a failure among those people.

Well, that’s not actually true, Ivanka. First and foremost, the media hyped the hell out of you after the election and before the inauguration, saying that you might be some kind of liberal stalwart there within the administration who would force the President to act on things like climate change and equal change for men and women, and gay rights, and all of that. And yet, you’ve just continued to roll over and roll over and roll over, and then wring your hands and say, “Oh, you can’t actually to change this man’s mind! No, absolutely not!” Well no, because that’s pretty much what you had told us you were gonna try to do. And your father clearly won’t listen to you. And I guess now, you’re finally starting to realize it. Either that, or you’re finally tired of people calling you out on it. Which, I’m gonna guess, is probably what happened here.

You see, it’s not that you’re not changing your father’s mind. It’s that you’re not standing up for the issues that you allegedly claimed to care about during the campaign and before the inauguration. You sat by and supported your father’s decisions to appeal an Obama era rule that would’ve forced companies to disclose how much they’re paying men versus how much they’re paying women, which could’ve helped us tremendously in the fight for equal pay for the genders. You did nothing about your father saying transgendered people can’t serve in the military. You’ve done nothing about the issue of climate change, even though we’re witnessing some of the worse climate catastrophes this country has ever seen.

You have done nothing. Just like your father, you are a fraud. So you can go out there and say that it’s unrealistic to suspect or expect you to do anything about your father’s positions, but isn’t that kind of what your role is supposed to be? Aren’t you some sort of advisor to the President, even though you’re also his daughter? You’ve sat in on policy meetings. You’ve gone to meet with Ambassadors overseas on behalf of your father. So yeah, you’ve got some sway. The problem is, I don’t think you believed in any of those things you told us you believed. It’s not that you’re not convincing him to be more liberal, it’s that you never were. You, just like your father, conned millions of people in this country into thinking that you actually cared about them. But you are no different than that sycophantic narcissist that we have in the White House. Ivanka is exactly like Donald Trump. She fooled a lot of people into thinking she wasn’t, but she has proven at every given opportunity that she is exactly like her father.