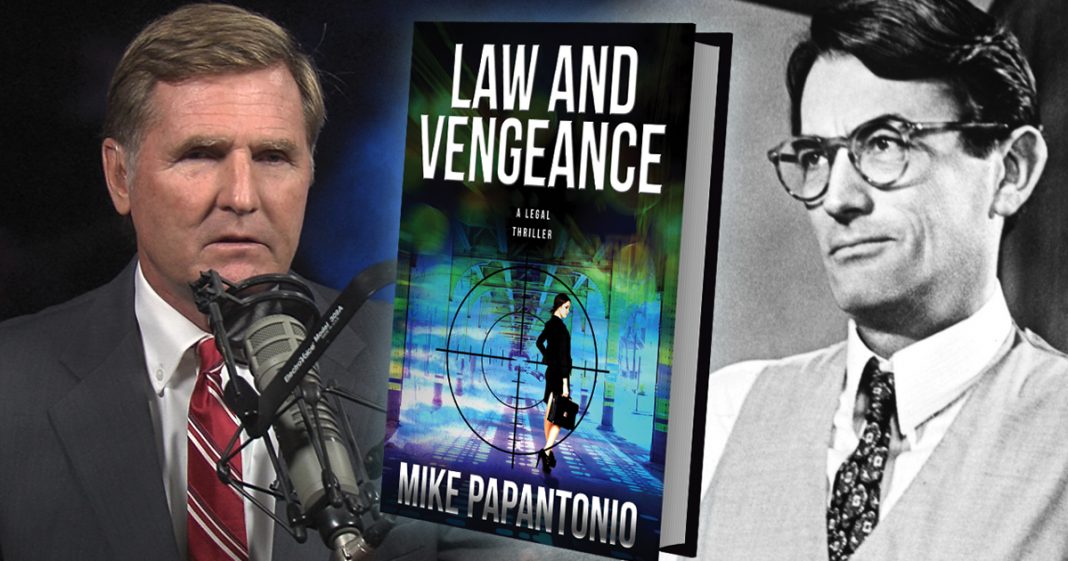 America’s Lawyer, Mike Papantonio, talks about the impact a character like Attic Finch had on his legal career and why it’s important to balance your private life with your legal life.

John Clemens: And taking a play off the title of two of your books, is there disorder, is there vengeance allowed in a courtroom?

Mike Papantonio: Well I think what has happened, disorder, absolutely. Not in a courtroom, but in the scenes behind the courtroom. The other side, and I’ll say the other side by putting it this way. I work exclusively against large corporations. I find that those large corporations have the ability, the financial ability, the impact, the political impact, the affluence, the influence, to create an awful lot of chaos around a case.

They do that because if you’re trying to get a case to trial and you’re trying to make a presentation to a jury, the more chaos the other side can present, the more difficult it is to present a cogent story that a jury might react to. You see a lot of that type of disorder. The vengeance, I think what ends up happening with lawyers a lot of times, especially lawyers who have prosecuted and they’ve seen so many people get away with it, they do develop a sense of vengeance and the sense is, they see a system that doesn’t work well, especially if you come from a prosecutors background as I have.

When I see the Department of Justice for example, where $8 trillion is stolen from the American public, and we then have the president telling us, ‘Well we’re going to do something about Wall Street,’ and then nothing happens. Not one of them go to prison. You have a sense of vengeance that really, it never really, it’s a sense of anger and a sense of vengeance that you carry with you in the courtroom sometimes because you know a lot of, a lot of that justice depends on how good you are and it depends on what’s the story that you’re able to tell.

Yeah, there is some element of vengeance. It certainly doesn’t manifest itself as it does in this book. I don’t know any stories that have taken vengeance that far. But there’s always that element of vengeance when you understand you’re working in the justice system that sometimes is totally upside down, where some thug on Wall Street can steal $8 trillion and not go to prison but some character out on the streets selling an ounce of marijuana can go to prison for three years. There’s problems with the justice system. I explore that an awful lot in all of the books that I write.

John Clemens: Do you see yourself as Atticus Finch?

Mike Papantonio: I wish I could. Atticus Finch influenced me tremendously as an attorney, and it’s influenced my life as an attorney. I think I’ve always … The thing that attracted me about Atticus Finch was his willingness to take on the plight of the underdog. It’s so easy to come out of law school, John, and somebody says to you, ‘Well look I’m going to offer you a salary of a couple of hundred thousand dollars. Come out here to LA, New York, Chicago. Work for a big corporate defense firm and you’re going to make a lot of money.’

At some point you have to say, what you’re doing with your hands, does that line up with what you feel in your heart and know in your mind? I think Atticus Finch did that. Atticus Finch was a small town attorney who by the way was actually based on a composite of some real small town attorneys up around Monroeville, Alabama. I’ve always been impressed with that notion of how you should lawyer, how what you do in the courtroom should be how you live your life with your family. That it’s not two separate, it’s not two separate hats. It’s a continuum.

What you do in your private life should have an impact on what you do as an attorney. I think that had a big impact on me when I first discovered Atticus Finch, “To Kill A Mockingbird.” I actually wrote a book about it. It was called, “In Search of Atticus Finch.” It was really more of a niche book for lawyers. It was how to improve the quality of your life and still be a good lawyer.

John Clemens: Tell us about your desire, and what a reader will take away when they close the last page of “Law and Vengeance.”

Mike Papantonio: I think, one thing I hope they take away is that to ask more, and question more. That means that we’re sold something every day. We’re sold this notion that corporate America’s on our side, that if they made a new pill, the pill’s going to be great. They tell us that if they’re not going to pollute our waterway because they have some special process that won’t pollute our waterway, and we find out that they do. We hear from the weapons industry that they do things above board.

It’s, there’s some element of cynicism to it John, and the cynicism comes really from having firsthand experience and seeing it. I hope when somebody reads my books, whether it’s “Law and Disorder”, “Law and Vengeance”, or the next two coming out, I hope that they understand that what I’m really trying to say is question more. Ask more questions about what you believe is the acceptable norm, and I think you’re going to be surprised.