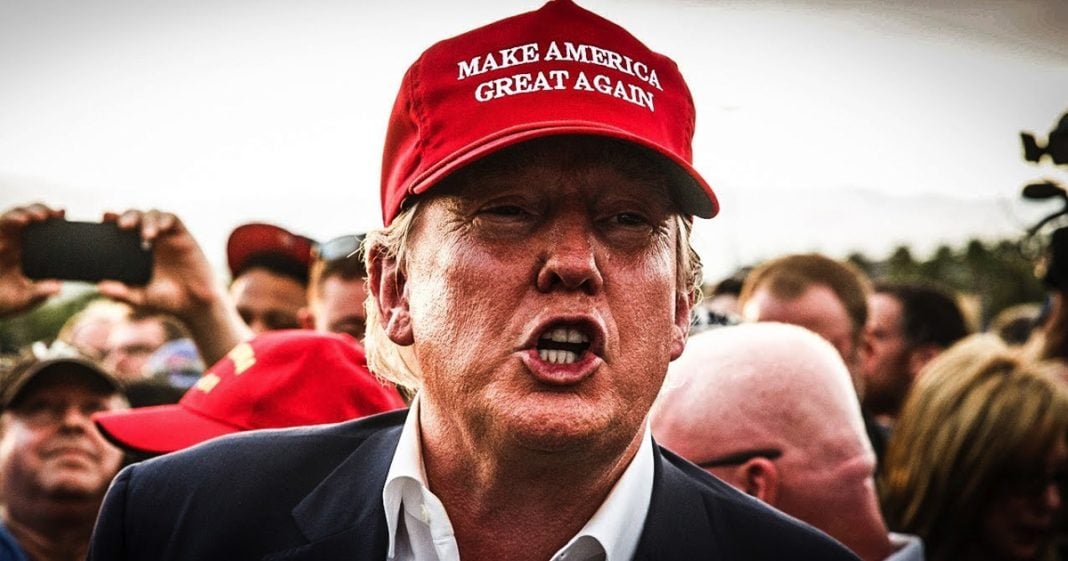 Donald Trump’s hardcore fans aren’t just ready to hang up their hats on the President, they are literally burning them. Following the announcement that an immigration deal regarding DACA was made with Democrats (a deal that Trump denies), Trump’s supporters began posting videos of themselves burning their “Make America Great Again” hats. Ring of Fire’s Farron Cousins discusses this.

Following a recent announcement that Donald Trump and the Democrats had come to some sort of deal on DACA and immigration reform, even though Donald Trump said there was no deal made, the appearance that he’s going to work with Democrats and somehow give these people path to citizenship has enraged his far-right base so much so that videos are now floating around on Twitter and Facebook of hardcore Donald Trump supporters burning their make America great again hat. In fact, there were so many of these that the burn my MAGA hat hashtag began to trend on Twitter, and you can still look that up and see videos of these people who are so furious with the President that they’re burning his merchandise that they probably overpaid for to begin with. But don’t worry about Trump, obviously he already got their vote. He got their money for the hats, so he’s gonna be just fine.

But let’s get to the real heart of this issue, and this little backlash, protest, MAGA hat burning proves that Trump supporters supported the President, at least the hardcore folk, the alt-right folk, because he promised to get rid of the people in this country who didn’t look like them. That is their only issue, that is their only concern, and that is their only motivation. Even Ann Coulter came out again, even after she said that, “Who doesn’t want Trump impeached now,” she’s now come out and admitted, “I bet on a loser with Donald Trump.” Keep in mind, this is a woman who wrote a book titled In Trump, We Trust.

It was always about immigration. It was always about preserving the white race here in the United States. It had nothing to do with keeping people safe from the very few dangerous people that come across the border. It was all about making making America white again. That is what these people wanted and now that it appears that Donald Trump might not deport 800,000 people who came into this country as children, suddenly they lose their minds. They’ve decided that Trump isn’t good enough for them. Even though they supported him wholeheartedly throughout the campaign because of his racial overtones that were pretty much the common theme throughout his campaigning and his speeches and his rallies, they now believe that they have been betrayed, that Donald Trump somehow isn’t a true conservative.

Listen, Donald Trump’s not gonna disappoint you people. He wants your vote and that’s why he’s still out there pushing for this wall. So he’s gonna do whatever he has to to make you happy because it appears that he believes the same things that you do and that is that America should be nothing but white people, close off the borders, don’t let anyone that looks different from us come into this country. Unfortunately, that is grossly at-odds with American history, as that is literally how this country was founded to begin with. A lot of ancestors, for most of the people in this country, are not Native Americans. We came over, either across a border or on a ship, some of even on planes ’cause we’ve been here that recently.

So stop acting like you have some kind of claim to American heritage because American heritage is everything. But more importantly, American heritage is Native Americans, the people that this country’s treated like crap since we first came over on those boats. We owe the white people in this country nothing. But we owe the people who wanna come over here and make a better life for themselves, those are the people who aren’t gonna go out there and run over protesters with their car. They’re not gonna go out there, buy tiki torches, and march in their khaki shorts because they want a homogenous race here in the United States. They wanna come over here and work and contribute and live a better life. That’s more than we can say about these people burning their MAGA hats.