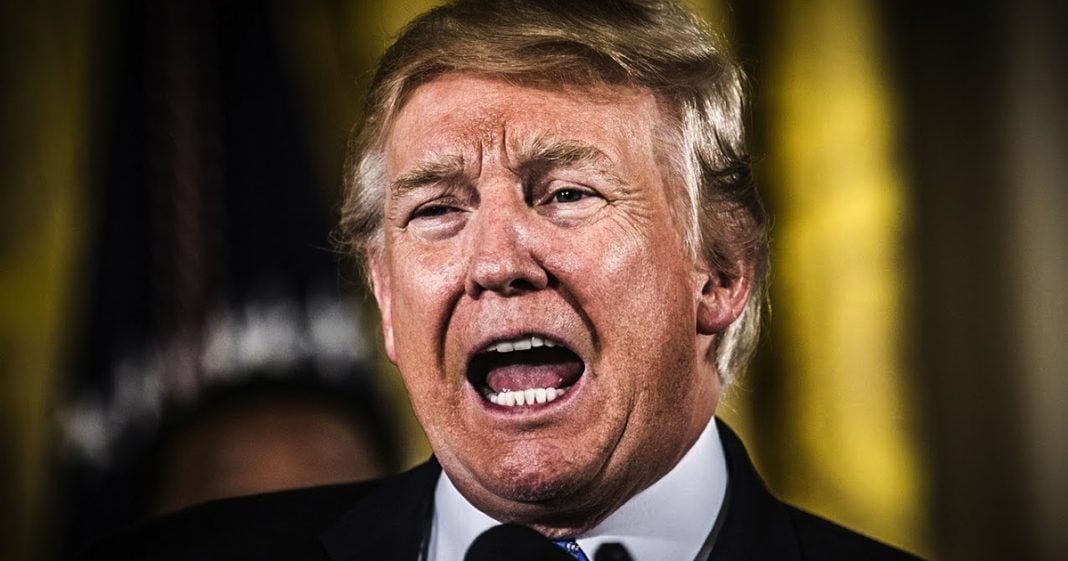 After a meeting with Congressional leaders in Washington, D.C., Donald Trump proudly proclaimed that the wealthy in this country will not benefit one bit from the tax reform package that Republicans are working on. This is a lie. We know from statements given by Republican lawmakers that they are including massive tax giveaways to the rich and the working class will get next to nothing. Ring of Fire’s Farron Cousins explains why this could be Trump’s biggest lie to date.

Since being sworn in as president of the United States, Donald Trump has told some pretty hefty lies, and keep in mind, he’s only been in office for a little under eight months and he’s told over 1,000 lies to the American public since the time he got sworn in, but this week on Wednesday he told what might be one of the biggest lies we’ve seen from him since he came to the public’s attention, and that is when he said after a bipartisan meeting on tax reform that the wealthy in this country would not be getting a tax break. That’s right, Donald Trump, the man who’s been advocating on cutting taxes for the wealthy, the man who’s the head of a party whose entire platform is cutting taxes for the wealthy, says that he will not cut tax on the wealthy. This tax package that he’s putting together with the Republicans is all about helping the middle class, and the working class, and everybody else. He even went as far as to say if wealthy people have to pay more in taxes then they’re just going to have to pay more.

Now, in theory, on its surface, I absolutely support that 100%. I think that is a phenomenal plan. Raise taxes on the millionaires and billionaires and lower taxes on the working class. That is a sound idea that I think everybody in this country could probably get behind. Unfortunately, he doesn’t mean a word of it, because Thursday morning immediately after telling everybody the wealthy are not getting a tax break, he got on Twitter and started talking about giving the wealthy a tax break in the form of cutting corporate taxes. Now, I know a corporation is not a person, even though the Supreme Court tells us they are, but when you cut taxes on a corporation and they have more money that doesn’t have to go to the government, where does it go?

Oh, it goes to shareholders. It goes to CEOs. It goes to board members, so those people will be making more money and getting the benefits of your tax cuts, so yeah, you are cutting taxes on the wealthy, so don’t sit there in front of the cameras and say that, “Oh, no, the wealthy are going to have to pay more. See how populist I am? See how great I am? See these promises I’m keeping?” This is how you duped the voters in the Midwest to voting for you in the first place, and if anybody can’t see through this lie, then I strongly suggest they go back to school, get a better education so that they can be able to point out when you’re lying and when the Republican Party is actually going to propose one thing and do another, because that’s what this is.

The analyses that we have seen coming out about a few of the reforms that Republicans have proposed show that the biggest tax cuts are going to go not even necessarily to corporations but to the top 1%, people making more than 3.8 I think million dollars a year. They’re going to get almost a million dollars a year back in tax cuts from the Republican plan that Donald Trump is sitting there telling us is not going to cut taxes on the wealthy. Meanwhile, the working class is going to average a little under $40 a year in tax savings. In no way, in no reality is that a fair tax plan.

If you can pay more, if you’ve made your money, made your fortune by using American schools, American roads, and bridges, and police departments, and fire departments, and our military that keeps you safe, then I think you need to pay a little more, because you’ve benefited from this country more than anyone else. I think that’s perfectly fair, and if you’re not going to just take that tax cut money and go hire more workers, then hell yeah you should be spending it on the federal government who can do those things, putting people to work rebuilding our infrastructure. If this administration was serious about creating jobs, that is what they would do, but Donald Trump was absolutely lying through his teeth when he tells us he’s not going to cut taxes on the wealthy because that is specifically what his tax reform package is designed to do.