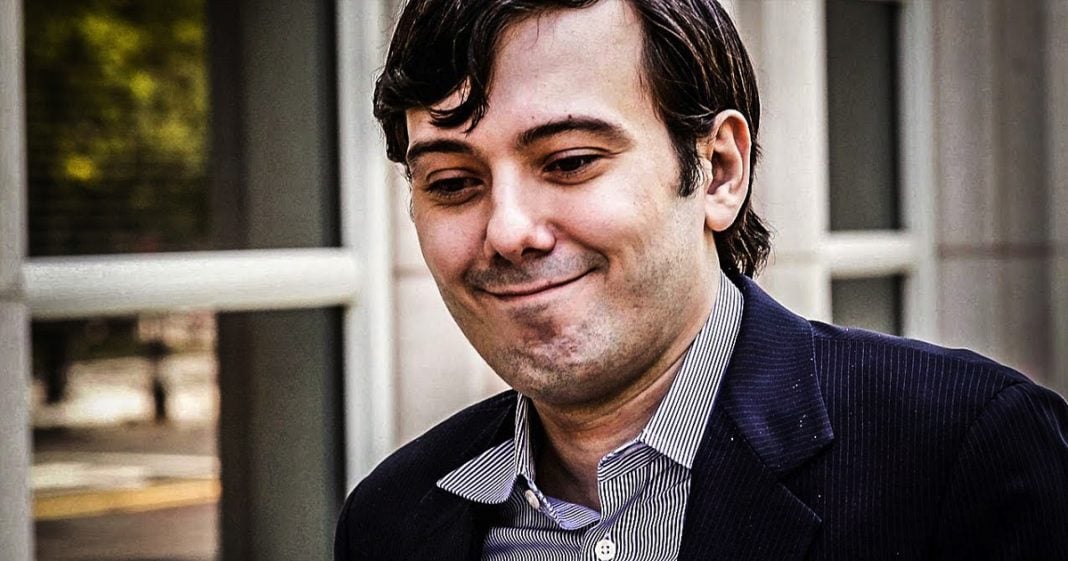 Martin Shkreli, better known online as the Pharma Bro, has had his bail revoked after a hearing determined that he might pose a threat to the public. The hearing was held because Shkreli offered $5,000 for a lock of Hillary Clinton’s hair, though it has not been made completely clear why he wants her hair. Shkreli is now awaiting sentencing for three counts of fraud and could face a total of 20 years in prison. Ring of Fire’s Farron Cousins discusses this.

It’s not very often that I get to talk about something positive that has happened in this country, but on Wednesday of this week, a judge revoked the bail of pharma bro Martin Shkreli after he has posted online that he was offering five thousand dollars to anyone who could get him a lock of Hillary Clinton’s hair. Now, before we get into the meat of this story, we don’t necessarily know exactly why Shkreli wanted lock of Hillary Clinton’s hair, maybe he was trying to get his hands on her DNA. Maybe he was going to run her ancestry DNA results for her, we don’t know. But it’s pretty creepy and disgusting no matter which way you slice it.

But here’s the bottom line. A judge held a special hearing because of Martin Shkreli’s post, putting a bounty on Hillary Clinton’s hair, and so lawyers for the prosecution argued that this proves that this man is a threat to the public and should not be out on bail before his sentencing hearing that’s scheduled to take place this coming January, 2018. Now his defense tried to say that, look, other politicians like Donald Trump have said horrible things and they didn’t have their bail revoked, and needless to say that argument didn’t work. So martin Shkreli was immediately sent to jail where he will sit until January when he faces a sentencing for being convicted on three counts of fraud, the penalties total could equal 20 years in prison for Shkreli. I’ll be surprised if he even gets up to give, though.

Martin Shkreli helped put the conversation of overpriced pharmaceuticals in the United States on the map. It put that issue in the forefront, and finally, the corporate media started paying attention to this, even though they get huge advertising dollars from people like Merck, and Pfizer, and all the other big pharmaceutical companies. But what Shkreli did in terms of jacking up the price of that AIDS medication, is no different than what all of the other pharmaceutical companies do every single day in the United States. We pay those ridiculous markups. The only thing with Shkreli is that he bought the company, then jacked it up. He wasn’t the current CEO that had been there for years and was developing these things, he bought the patent, and increased the price, which is basically what boardrooms and CEOs already do for drugs that they develop.

Now again, that’s not why Shkreli went to jail, or why he was convicted, but it’s why we all know who he is at this point. But let’s be clear about this. Shkreli’s actions in the pharmaceutical industry are no different than any of the other companies out there, and they deserve the same level of scrutiny that the media has given Martin Shkreli. We saw what can happen when the media starts to pay attention. We saw it with EpiPens, where the CEO of Mylan Pharmaceuticals had to lower the price after huge public backlash, after she had to testify before Congress, and somehow explain why it costs 650 dollars per injection to save somebody’s life when they go into anaphylactic shock.

Shkreli is no different. The CEO of Mylan, who happens to be I believe the daughter of Democratic Senator, Joe Manchin, and the actions of every other pharmaceutical head in the United States are identical. So kudos to Martin Shkreli for putting this issue on the map, because had his greed and arrogance not been covered, we wouldn’t be having a lot of the conversations about pharmaceuticals that we are having today. And so best of luck to you, Shkreli, in prison. Sorry you didn’t get Hillary Clinton’s hair for whatever perverted reason you wanted it, but I hope you enjoy your new home behind bars.